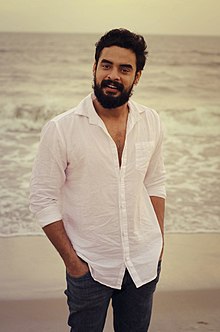 Born/Date of Birth: 21 January 1989
Place of Birth: Irinjalakuda, Kerala, India
Citizenship: Indian
Occupation: Actor, model
Spouse(s): Lidiya Tovino(m.2014)
Children: Izza Tovino
Website: www.tovinothomas.com
Tovino Thomas is an Indian film actor best known for his work in Malayalam films, he has also acted in a few Tamil films. He made his debut acting in 2012 with the Malayalam film Prabhuvinte Makkal. Tovino is recognized for the wide range of characters he has portrayed which includes protagonists, strong crucial characters and negative roles. He won the Filmfare Award for Best Supporting Actor for his performance in Ennu Ninte Moideen (2015). He also won the Kerala Film Critics Association Award (Best Second Actor) for his performance in Mayaanadhi (2017).

Career
Tovino made his acting debut in Prabhuvinte Makkal directed by Sajeev Anthikkad in 2012. Subsequently he worked as an Assistant Director in Roopesh Peethambaran's "Theevram". ABCD (2013) where he portrayed an antagonist received critical and commercial success. Tovino appeared as the lead in the film Koothara which also featured Mohanlal. Tovino played a lead role in Roopesh Peethambaran's directorial venture You Too Brutus.

He has played major roles in the films including 7th Day (2014), Ennu Ninte Moideen (2015), Charlie (2015), and Guppy (2016), Oru Mexican Aparatha (2017), Ezra, Godha (2017) and Mayaanadhi (2017). The films had achieved critical and commercial success making him one of the leading actors of Malayalam cinema. Guppy (2016) received critical acclaim and the film became a cult classic upon the DVD and digital release.

He portrayed the role of Perumparambil Appu in the film Ennu Ninte Moideen which was released in 2015. The performance received critical acclaim, nominations and multiple awards He played the role of Thejus Varky in Guppy (2016). Tovino won the New Sensational Hero Award at the NAFA 2017 for his performance in the film.

Oru Mexican Aparatha which featured Tovino in a double role was an instant box office hit. The film was directed by Tom Emmatty. The next film, Godha which was directed by Basil Joseph, repeated the success and crossed 100 days of shows. Later, Mayaanadhi (2017) became a blockbuster with Tovino and Aiswarya Lekshmi receiving much appreciation for the portrayal of the characters.

2018 played to be a crucial year for Tovino Thomas with a series of successful ventures and the blockbusters. Theevandi received critical acclaim and received multiple awards and nominations. Meanwhile, Aami which was a biopic was noted by critiques for the performance and details. Maradona which featured Tovino Thomas in the lead role became a commercial and critical success with shows across 128 theaters in Kerala. Tovino Thomas was cast in a major role as the antagonist in Maari 2 with Dhanush. Maari 2 failed to broke box office records in Tamil Nadu during 2018. He kept the momentum going with a solid track record of successful films including Ente Ummante Peru, Lucifer, and Uyare. Uyare became the first Malayalam film to be released in South Korea.

Personal life
Tovino was born in Irinjalakuda, Thrissur as the younger son of Adv. Ellikkal Thomas and Sheela Thomas. His siblings are Tingston Thomas and Dhanya Thomas. He completed primary schooling from Don Bosco Higher Secondary School, Irinjalakuda and Secondary (Plus Two) schooling from St Mary's Higher Secondary School Irinjalakuda and graduated with Bachelor's degree in Electronics and Communication Engineering from Tamil Nadu College of Engineering, Coimbatore, Tamil Nadu. He was a part of the handball Team of Don Bosco High School and also helmed as the school leader. He later worked in Cognizant Technologies as a software engineer. He was active in sports, fitness and modeling.

Tovino married his longtime girlfriend, Lidiya at St. Thomas Cathedral, Irinjalakuda, on 25 October 2014. The duo had met during their school days and married after nine years They have a daughter named Izza Tovino born on 11 January 2016. Tovino Thomas had volunteered during 2018 Kerala floods to lead rescue and rehabilitation missions.