Charles Atlas (born Angelo Siciliano; October 30, 1892 – December 24, 1972) was an Italian-American bodybuilder best remembered as the developer of a bodybuilding method and its associated exercise program which spawned a landmark advertising campaign featuring his name and likeness; it has been described as one of the longest-lasting and most memorable ad campaigns of all time.

Atlas trained himself to develop his body from that of a "scrawny weakling", eventually becoming the most popular bodybuilder of his day. He took the name "Charles Atlas" after a friend told him that he resembled the statue of Atlas on top of a hotel in Coney Island and legally changed his name in 1922. He marketed his first bodybuilding course with health and fitness writer Dr. Frederick Tilney in November 1922. The duo ran the company out of Tilney's home for the first six months. In 1929, Tilney sold his half of the business to advertising man Charles P. Roman and moved to Florida. Charles Atlas Ltd. was founded in 1929 and, as of 2019, continues to market a fitness program for the "97-pound weakling" (44 kg). The company is now owned by Jeffrey C. Hogue. 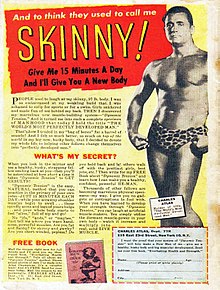 Angelo Siciliano was born in Acri, Cosenza, on October 30, 1892. Angelino, as he was also called, moved to Brooklyn, New York, in 1903, and eventually became a leather worker. He tried many forms of exercise initially, using weights, pulley-style resistance, and gymnastic-style calisthenics. Atlas claimed that they did not build his body. He was inspired by other fitness and health advocates who preceded him, including world-renowned strongman Eugen Sandow and Bernarr MacFadden (a major proponent of "Physical Culture"). He was too poor to join the local YMCA, so he watched how exercises were performed, then performed them at home. He attended the strongman shows at Coney Island, and would question the strongmen about their diets and exercise regimens after the show. He would read Physical Culture magazine for further information on health, strength, and physical development, and finally developed his own system of exercises which was later called 'Dynamic Tension', a phrase coined by Charles Roman.

A bully kicked sand into Siciliano's face at a beach when he was a youth, according to the story that he always told. At this time in his life, also according to the story, he weighed only 97 pounds (44 kg). According to several stories and claims, he was at the zoo watching a lion stretch when he thought to himself, "Does this old gentleman have any barbells, any exercisers? ... And it came over me. ... He's been pitting one muscle against another!" None of the exercises in the Dynamic Tension course could be attributed to how lions use their bodies. Other exercise courses of the time contained exercises similar to Atlas's course, particularly those marketed by Bernarr McFadden and Earle E. Liederman.

Bernarr MacFadden, publisher of the magazine Physical Culture, dubbed Siciliano "America's Most Handsome Man" in 1921, and "Americas Most Perfectly Developed Man" in a 1922 contest held in Madison Square Garden He soon took the role of strongman in the Coney Island Circus Side Show. Nowhere did Atlas win a title proclaiming him to be the world's most perfectly developed man.

In 1922, 30-year-old Siciliano officially changed his name to Charles Atlas, as it sounded much more American. He met Dr. Frederick Tilney, a British homeopathic physician and course writer who was employed as publisher Bernarr MacFadden's "ideas man". Atlas and Tilney met through MacFadden, who was using Atlas as a model for a short movie entitled "The Road to Health". Atlas wrote a fitness course and then asked Tilney to edit it. Tilney agreed and Atlas went into business in 1922. 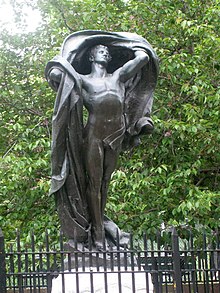 Besides photographs, Atlas posed for many statues throughout his life. These included Alexander Stirling Calder's Washington at Peace (1917–18) on the Washington Square Arch, Manhattan; Pietro Montana's Dawn of Glory (1924) in Highland Park, Brooklyn (sometimes misreported as Prospect Park); and James Earle Frazer's Alexander Hamilton (1923) at the U.S. Treasury Building in Washington, D.C.

Death
Atlas began to experience chest pains after exercising during his final years, resulting in his hospitalization in December 1972. He died from a heart attack in the hospital on December 24, 1972 in Long Beach, New York at age 80. He left behind a son, Charles Jr., and a daughter, Diana. His wife, Margaret, had died seven years before. Nunziato Siciliano, Atlas' father, who had returned to Italy shortly after arriving in the USA in 1903, lived into his 90s. Atlas' son, Charles Jr., died in August 2008 at the age of 89. 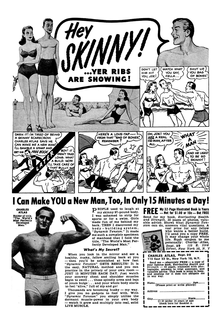 The famous Charles Atlas print advertisements became iconic mostly because they were printed in cartoon form from the 1930s on, and in many comic books from the 1940s onwards – in fact continuing long after Atlas' death. The typical scenario, usually expressed in comic strip form, presented a skinny young man (usually accompanied by a female companion) being threatened by a bully. The bully pushes down the "97-pound weakling" and the girlfriend joins in the derision. The young man goes home, gets angry (usually demonstrated by his kicking a chair), and sends away for the free Atlas book. Shortly thereafter, the newly muscled hero returns to the place of his original victimization, seeks out the bully, and beats him up. He is rewarded by the swift return of his girlfriend and the admiration of onlookers.

The ad was said to be based on an experience the real Atlas had as a boy. With variations, it was a mainstay of comic books and boys' magazines for decades. The ads usually conclude with the words "As is true of all the exercises in Atlas's course, you can do these exercises almost anywhere."

Charles Atlas slogans used in advertising copyrighted in 1932 included "Battle Fought in Bed that made Fred a He-Man!", "Insult that Made a Man out of Mac", and "Let Me Give You a Body that Men Respect and Women Admire!". Slogans copyrighted the following year included "97 pound weakling... Who became the World's Most Perfectly Developed Man", and "Just Seven Days that's All I Need".

"The Insult that Made a Man out of Mac"
In this, the full-length version, the protagonist, "Mac," is accosted on the beach by a sand-kicking bully while his date watches. Humiliated, the young man goes home and, after kicking a chair and gambling a three-cent stamp, subscribes to Atlas's "Dynamic-Tension" program. Later, the now muscular protagonist goes back to the beach and beats up the bully, becoming the "hero of the beach." His girl returns while other women marvel at how big his muscles are. (An earlier but otherwise almost identical version, "How Joe's Body Brought Him Fame Instead of Shame," debuted in the 1940s).

"The Insult That Turned a 'Chump' Into a Champ"
In this version, which debuted in 1941, "Joe" is at a fair with his girl when the bully (who has just shown his strength with the "Ring-the-Bell" game) insults and pushes him. Joe goes home, slams his fist on the table, and orders the free Atlas book. Joe then returns to the fair, rings the bell, and pushes down the bully while his girlfriend reappears to compliment him on his new, powerful physique.

"Hey, Skinny! Yer Ribs Are Showing!"
The condensed, four-panel version stars "Joe," though it is otherwise identical to Mac's story. Instead of "Hero of the beach," the words floating above Joe's head are "What a man!"

"How Jack the Weakling Slaughtered the Dance-Floor Hog"
Another version of the ad presents a scenario in which "Jack" is dancing with his girl, Helen. They are bumped into by a bully, who comments on how puny Jack is, not even worth beating up. Jack goes home, kicks a chair, and sends away for Atlas's "free book." Later, the muscular Jack finds the bully, punches him, and wins back the admiration of Helen. This time, the words "Hit of the party" float over his head as he basks in the admiration of the other dancers.

In popular culture
Literature
In the 1966 postmodern novel Beautiful Losers, written by Leonard Cohen, Charles Atlas is parodied as "Charles Axis."
The short story "Charles Atlas Also Dies" by Sergio Ramirez centers on the main character, a follower of Atlas's exercise program, and his trip to the United States to meet Charles Atlas himself; written from an ironic and dark-humored perspective. Among the numerous references to Atlas's program/story/advertisements, the main character describes having sand kicked in his face by "two big hefty guys" in front of his girlfriend and later being compared to the mythological god Atlas after undergoing the program. The story juxtaposes the superhuman strength and notoriety of Charles Atlas—the symbol, with the fragile and mortal aspects of Charles Atlas—the man. The story begins with the quote: "Charles Atlas swears that sand story is true. – Edwin Pope, The Miami Herald".
In Kurt Vonnegut's novel Cat's Cradle, Charles Atlas is mentioned. When the narrator comes across the term "Dynamic Tension" in a book about the mysterious cult leader Bokonon, he laughs because he imagines the author does not know "that the term was one vulgarised by Charles Atlas, a mail-order muscle-builder." However, as he reads on he finds that Bokonon is an alumnus of Atlas's training program, which has inspired his idea that "good societies could be built only by pitting good against evil, and by keeping the tension between the two high at all times."
In Charles Bukowski's short story Bop Bop Against That Curtain, part of the 1973 volume South of No North, the main characters, a bunch of kids, tried Charles Atlas' Dynamic Tension program to look tough, but they prefer lifting weights as it seems to them "the more rugged and obvious way".
In Michael Connelly's early Harry Bosch books (The Black Echo, The Black Ice, The Concrete Blonde, The Last Coyote), Bosch's Commanding Officer, Lieutenant Harvey Pounds, is nicknamed "98" as a reference probably both to Charles Atlas's "97 pound weakling" and the Rocky Horror Picture Show.
Film and TV