Princess Eugenie, Mrs Jack Brooksbank (Eugenie Victoria Helena; born 23 March 1990), is a member of the British royal family, and the younger daughter of Prince Andrew, Duke of York, and Sarah, Duchess of York. She is tenth in line of succession to the British throne, after her elder sister, Princess Beatrice of York.

Early life
Princess Eugenie was born in London at Portland Hospital on 23 March 1990 at 7:58 in the evening, the second child of the Duke, and Duchess of York, and sixth grandchild of Queen Elizabeth II and Prince Philip, Duke of Edinburgh. On 30 March, the seventh day after her birth, it was announced that the Duke and Duchess of York had named her Eugenie Victoria Helena.

She was baptised at St Mary Magdalene Church, Sandringham, by the Bishop of Norwich on 23 December 1990. She was the first royal baby to have a public christening and the only one of the Queen's grandchildren not to be baptised in the Lily Font. Her godparents were James Ogilvy (her father's second cousin), Captain Alastair Ross (who was unable to attend), Susan Ferguson (her maternal grandfather's second wife), Julia Dodd-Noble, and Louise Blacker.

Eugenie's parents divorced when she was six years old. When she was not at school, she spent her time with her family as the divorce had been amicable. The Duke and Duchess of York had agreed to joint custody of the girls. Eugenie and her sister frequently travel abroad with one or both of their parents. In the April 2008 issue of Tatler, Eugenie described her grandmother as "one of the most amazing women ever" and her parents as "the best divorced couple" she knew.

In October 2002, the 12-year-old Eugenie underwent back surgery at the Royal National Orthopaedic Hospital in London to correct scoliosis; two 12-inch titanium rods were put in her back. She made a full recovery and was not expected to undergo any further surgery.

Education and career
Eugenie began her schooling at Winkfield Montessori from 1992 to 1993. From there she joined her sister at Upton House School in Windsor until 1995. She attended Coworth Park School from 1995 to 2001, and then St George's School, near Windsor Castle until 2003. For the next five years, Eugenie boarded at Marlborough College in Wiltshire. She undertook a gap year before continuing her education in 2009. Eugenie began studying at Newcastle University in September 2009, combining Art History, English Literature and Politics. She completed her studies in 2012, earning a 2:1 in English literature and history of art.

In 2013, she moved to New York City for one year to work for the online auction firm Paddle8 as a benefit auctions manager.

In July 2015, she moved back to London to work for the Hauser & Wirth art gallery as an associate director and was promoted to be a director in 2017. 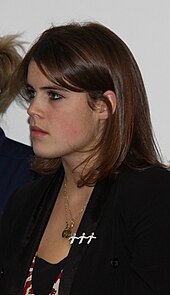 Princess Eugenie receives no allowance from the Privy Purse. She does, however, undertake occasional public engagements, which are usually connected with the charities she supports, including the Teenage Cancer Trust and Children in Crisis. In 2018, Children in Crisis merged with Street Child, a children's charity active in multiple countries, with Eugenie still serving as an ambassador.

Eugenie and her sister represented their father at a service of thanksgiving for her aunt, Diana, Princess of Wales, in 2007. In 2008, she performed her first solo public engagement, opening a Teenage Cancer Trust's unit for young cancer patients in Leeds.

On 2 June 2011, Eugenie visited the Royal National Orthopaedic Hospital (RNOH) with her father as one of her first official engagements. In April 2012 she agreed to be patron for the Hospital's Redevelopment Appeal, which was her first patronage. In 2014, Eugenie re-opened the children's unit at the RNOH. In 2014, she partnered with Daisy London Jewellery to create a limited edition charity bracelet to benefit the RNOH's Appeal.

In January 2013, Eugenie and her sister, Princess Beatrice, visited Berlin and Hanover in Germany for a series of engagements. These included representing the Queen at the reopening of the former Hanoverian royal palace, the Schloss Herrenhausen, which was bombed by the Royal Air Force during the Second World War.

In 2016, Princess Eugenie, along with her mother and sister, collaborated with British contemporary artist Teddy M to create the first ever Royal graffiti. The painting on canvas, titled Royal Love, was painted at Royal Lodge and exhibited in London prior to being sold for a five-figure sum. Proceeds from the sale of the painting were donated to the charity Children in Crisis.

Princess Eugenie and her sister became Patrons of the Teenage Cancer Trust in June 2016. She is also Patron of the Coronet Theatre, the European School of Osteopathy, the Tate Young Patrons and, alongside her mother, the Elephant Family, of which her uncle and aunt, the Prince of Wales and the Duchess of Cornwall, are joint presidents. In 2016, Eugenie visited a safe house run by The Salvation Army and met with victims of sexual abuse and modern slavery.

In October 2016, rumours of a rift between Prince Andrew and Prince Charles over the future roles of Eugenie and Beatrice were widely reported in the media. The Duke of York subsequently issued a statement describing the story as "complete fabrication".

In 2017, Eugenie became the ambassador for the Artemis Council of the New Museum, a by-invitation membership initiative focused solely on supporting female artists. Eugenie also became an ambassador of Project 0 in 2018, a charity which in partnership with Sky Ocean Rescue, focuses on protecting the ocean from plastic pollution. In July 2018, in her capacity as director of the Anti-Slavery Collective, Eugenie spoke at the NEXUS Global Summit at the UN headquarters in New York to discuss ending modern slavery. In September 2018, she travelled to Serbia to visit ASTRA and ATINA, two grantees of the UN Trust Fund which fight against the issues of human trafficking and violence against women. In August 2019, it was announced that she would launch a podcast, the first member of the royal family to do so. Together with Julia de Boinville, co-founder of the Anti-Slavery Collective, they will highlight and discuss issues related to modern slavery.

Marriage
The Duke of York's Office at Buckingham Palace announced the engagement of Princess Eugenie and Jack Brooksbank on 22 January 2018. The couple had been dating for seven years, and were first introduced by friends in a ski break in Verbier, Switzerland, where Brooksbank was working. They were engaged on holiday in Nicaragua. Upon their return, he and Princess Eugenie worked on the design of a ring together; the finished design was the salmon-pink Padparadscha sapphire surrounded by a halo of diamonds, set on a gold band, with two further diamonds on the shoulders. In April 2018, the couple moved from St James's Palace and took up residence in Ivy Cottage at Kensington Palace.