Early life
Michelle Phan was born on April 11, 1987, in Boston, Massachusetts. She has an older brother and a younger half sister. Phan and her family moved to Tampa, Florida where she attended Tampa Bay Technical High School. Phan attended Ringling College of Art and Design. In March 2014, Phan received her Honorary Doctorate of Arts degree from Ringling. 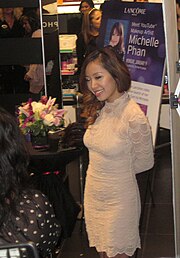 In 2005, Phan had a personal blog in which she discussed different makeup tutorials and received requests for further instruction. She began posting tutorial vlogs on Xanga under the username Ricebunny, and then began publishing on YouTube in May 2007.

BuzzFeed featured two of Phan's "How To Get Lady Gaga's Eyes" makeup tutorials in 2009 and 2010, which helped them go viral and brought her over a million subscribers. Phan became a YouTube advertising partner and launched FAWN, a YouTube MCN (multi-channel network), in 2012.

In 2010, Lancôme made Phan their official video make-up artist after she featured some of their products in her videos. She became their first Vietnamese spokesperson. In 2011, Phan co-founded MyGlam, a monthly beauty products subscription service, which has since been renamed ipsy, launched in September 2012; ipsy is a sponsor of the Generation Beauty conference. On August 15, 2013, L'Oreal launched a new cosmetic line called em by Michelle Phan, dedicating the brand to her mother.

In May 2014, Phan announced her partnership with Endemol Beyond USA to build a talent network to feature people from YouTube and create content for millennials. The ICON network, dedicated to "beauty, lifestyle and entertainment", launched in March 2015 online and on television via Roku.

In September 2014, Phan partnered with Cutting Edge Group to launch Shift Music Group. Phan published a book with Random House in October 2014, titled Make Up: Your Life Guide to Beauty, Style, and Success -- Online and Off.

After a yearlong YouTube hiatus (on June 1, 2017) Phan posted a video explaining why she took her break, citing legal troubles and issues with her self image. In the video's description she stated "I'll return when I'm inspired to share new ideas." She officially returned to YouTube in September 2019.

Copyright infringement lawsuit
In July 2014, Ultra Records sued Phan in the United States District Court for Los Angeles for copyright infringement relating to the music used in her YouTube videos. Ultra sought up to $150,000 in damages per infringement for up to 50 instances of alleged infringement, for a total of up to $7.5 million. Phan's representatives stated that she had received permission from Ultra to use the music, and Phan filed a countersuit against Ultra Records on September 18, 2014, in the United States District Court for the Central District of California. In August 2015, both suit and countersuit were dropped when both parties agreed to settle out of court. The terms of the agreement were not made public.