Early life
Abbott was born in Asbury Park, New Jersey on October 2, 1897 into a show business family. His parents, Rae Fisher and Harry Abbott, had worked for the Barnum and Bailey Circus. She was a bareback rider and he was a concessionaire and forage agent.When Bud was a child his father became a longtime advance man for the Columbia Burlesque Wheel and the family relocated to Harlem, then the Coney Island section of Brooklyn. Abbott dropped out of grammar school and began working summers with his father at Dreamland Park on Coney Island. When he was 15, Abbott signed on as a cabin boy on a Norwegian steamer but was soon forced to shovel coal. He worked his way back to the United States a year later.

As a teenager Abbott began working in the box office of the Casino Theater in Brooklyn. He spent the next few years in burlesque box offices, rising to treasurer. In 1918, while working in Washington, D.C., he met and married Jenny Mae Pratt, a burlesque dancer and comedian who performed as Betty Smith. They remained together until his death 55 years later. In 1923 Abbott produced a cut-rate vaudeville tab show called Broadway Flashes, which toured on the small-time Gus Sun circuit. Abbott began performing as a straight man in the show when he could no longer afford to pay one. He continued producing and performing in burlesque shows on the Mutual Burlesque wheel, and as his reputation grew, he began working with veteran comedians like Harry Steppe and Harry Evanson. Abbott suffered from epilepsy starting from about 1926. In 1964, he suffered the first in a series of strokes.

Career
Lou Costello and Hollywood
Abbott crossed paths with Lou Costello in the early 1930s when Abbott was producing and performing in Minsky's Burlesque shows and Costello was a rising comic. They first worked together in stock burlesque in 1935 at the Eltinge Theatre on 42nd Street, after an illness sidelined Costello's regular partner. They formally teamed up in 1936, and performed together in burlesque, vaudeville, minstrel shows, and stage shows.

In 1938, they received national exposure as regulars on the Kate Smith Hour radio show, which led to roles in a Broadway musical, The Streets of Paris in 1939. In 1940, Universal signed the team for their first film, One Night in the Tropics. Despite having minor roles, Abbott and Costello stole the film with several classic routines, including an abbreviated version of "Who's On First?" Universal signed the team to a two-picture deal, and the first film, Buck Privates (1941), became a major hit and led to a long-term contract with the studio.

It was directed by Arthur Lubin who later said "I don't think there has ever been a finer straight man in the business than Bud Abbott. Lou would go off the script - because he was that clever with lines - and Bud would bring him right back."

In the 1950s, they introduced their comedy to live television on The Colgate Comedy Hour, and launched their own half-hour filmed series, The Abbott and Costello Show.

Strain and split
Relations between Abbott and Costello were strained by egos and salary disputes. In their burlesque days, they split their earnings 60%–40%, favoring Abbott, because the straight man was always viewed as the more valuable member of the team. This was eventually changed to 50%–50%, but after a year in Hollywood, Costello insisted on a 60%–40% split in his favor, and it remained so for the remainder of their careers. Costello also demanded that the team be renamed "Costello and Abbott", but this was rejected by Universal Studios, resulting in a "permanent chill" between the two partners, according to Lou's daughter Chris Costello in her biography Lou's on First. Their relationship was further strained by Abbott's alcohol abuse, a habit motivated by his desire to stave off epileptic seizures.

The team's popularity waned in the 1950s, and the IRS demanded substantial back taxes, forcing the partners (both of whom had been free spenders and serious gamblers) to sell most of their assets, including the rights to many of their films. When the team's long-term contract with Universal was up in 1954, they demanded more money than the studio was willing to pay, and they were dropped by the studio.

In November 1956, Lou was the subject of the Ralph Edwards-produced TV show, “This Is Your Life.” This was just before the team opened in Las Vegas for what would be their last engagement as a team.

Abbott and Costello split in 1957. Costello made solo appearances on several TV shows and did one film, "The Thirty-Foot Bride of Candy Rock" (released posthumously in 1959.) Lou died on March 3, 1959.

Later years
Abbott faced financial difficulties in the late 1950s when the IRS disallowed $500,000 in tax exemptions which forced him to sell his home and come out of semi-retirement.

In 1960, Abbott began performing with a new partner, Candy Candido, to good reviews. But Abbott called it quits, remarking that "No one could ever live up to Lou." The following year, Abbott performed in a dramatic television episode of General Electric Theater titled "The Joke's on Me". In 1966, Abbott provided his own voice for the Hanna-Barbera animated series The Abbott and Costello Cartoon Show, with Stan Irwin providing the voice of Lou Costello. 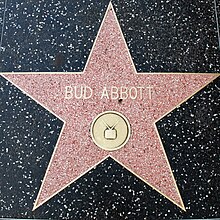 Norman and Betty Abbott, the children of Bud's older sister, Olive, started their careers in Hollywood working behind the scenes on the Abbott and Costello films. Betty became Blake Edwards' longtime script supervisor, and Norman directed episodes of many television series, including Leave It to Beaver, The Jack Benny Program, Sanford and Son and Welcome Back, Kotter.

Death
Abbott died of cancer at age 76 on April 24, 1974, at his home in Woodland Hills, Los Angeles. He was cremated and his ashes scattered in the Pacific Ocean. His widow, Betty, died on September 12, 1981.

When Groucho Marx was asked about Abbott shortly after his death, his response was that Abbott was "the greatest straight man ever."

Honors and awards
Abbott and Costello are among the few non-baseball personnel to be memorialized in the Baseball Hall of Fame, although they are not inductees of the Hall itself. A plaque and a gold record of the "Who's On First?" sketch have been on permanent display there since 1956, and the routine runs on an endless video loop in the exhibit area.

Abbott and Costello each have three stars on the Hollywood Walk of Fame for their work in radio, television and motion pictures.

In 1942, they were voted the country's No. 1 Box Office Stars by exhibitors.

Abbott received the Lifetime Achievement Award for Acting (posthumously) from the Garden State Film Festival in 2006; it was accepted on his behalf by his daughter Vickie Abbott Wheeler.

Abbott is a 2009 inductee of the New Jersey Hall of Fame.