Sara Magdalena "Malena" Ernman (born 4 November 1970) is a Swedish opera singer. Outside the world of opera and operettas, she has also performed chansons, cabaret, jazz, and appeared in musicals; and she has declared that she is very much attracted to the attributes of variété theatre and small, intimate stage rooms. She is a member of The Royal Swedish Academy of Music. Ernman represented Sweden at the Eurovision Song Contest 2009 in Moscow.

She is the mother of climate activist Greta Thunberg, who convinced her to give up her international opera career due to the environmental impact of aviation. 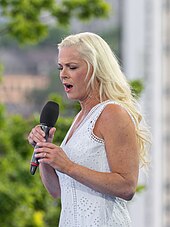 Early life
Ernman was born in Uppsala, Sweden. She spent her childhood and school years in Sandviken. Ernman was educated at the Royal College of Music in Stockholm, the Music Conservatory in Orléans, France, and at the school of the Royal Swedish Opera. She is married to actor Svante Thunberg, and has two daughters, Greta and Beata.

Operas
In 1997, Ernman sang in the premiere of Ivar Hallström's 1897 opera Liten Karin in Vadstena, Opera magazine noting that "the mezzo Malena Ernman was very expressive as Princess Cecilia, King Erik XIV’s sister". In 1998 her Rosina in Il barbiere di Siviglia at the Royal Opera in Stockholm was described as "displaying impressive technique" and "shaping the character with mocking good humour". The same year, she sang Kaja in the premiere of Sven-David Sandström's Staden under Leif Segerstam also at the Royal Opera in Stockholm, where one reviewer commented that "in vocal focus and expression, her full, rich voice is not that far behind Bartoli". In July 1999 Ernman sang the trouser role of Ziöberg in the premiere of Jonas Forssell's Trädgården (The Garden) at the Drottningholm Palace Theatre in Stockholm, conducted by Roy Goodman, the first new opera to be premiered at the theatre in modern times.

Her Nerone in Brussels in 2000 in Handel's Agrippina, alongside Rosemary Joshua's Poppea and Anna Caterina Antonacci's Aggripina was "the most convincingly brattish young man imaginable". In 2013 she returned to this role at the Gran Teatre del Liceu in Barcelona in a production by David McVicar conducted by Harry Bicket.

Ernman has sung several major roles with the Staatsoper Berlin, including Cherubino in Le nozze di Figaro and Zerlina in Don Giovanni, both under conductor Daniel Barenboim. She also performed Rosina in Rossini's Il barbiere di Siviglia with Staatsoper Berlin and the Finnish National Opera. With the Royal Opera Stockholm she has also sung the title role in Carmen.

Ernman worked with conductor René Jacobs in the roles of Nerone in Agrippina, Roberto in Scarlatti’s Griselda and Diana in Cavalli’s La Calisto.

In 2001, she sang Sesto in Handel’s Giulio Cesare at the Drottningholm Festival. She appeared at the Glyndebourne Festival in 2002 singing Nancy in Albert Herring and in 2003 singing Prince Orlovsky in Johann Strauss's Die Fledermaus, which was also performed and broadcast at the BBC Proms that year. During the 2003/2004 season Ernman sang Donna Elvira in Don Giovanni at La Monnaie in Brussels. At the Aix-en-Provence Festival that year, she performed as Lichas in Hercules with Les Arts Florissants under conductor William Christie, a role that was later revived at the Paris Opera and the Vienna Festival. During the spring and summer of 2005, she performed the title role in Philippe Boesmans’s Julie at la Monnaie, the Vienna Festival and Aix-en-Provence. In spring of 2006 she sang the title role of Dido and Aeneas with William Christie at the Vienna Festival. and Nerone in Agrippina at Oper Frankfurt.

In 2006, Ernman made her debut at the Salzburg Festival as Annio in La clemenza di Tito under conductor Nikolaus Harnoncourt. In 2007 her roles included Sesto in Giulio Cesare with René Jacobs in Vienna, Cherubino in Le nozze di Figaro with Daniel Harding in Aix-en-Provence and Nerone in L'incoronazione di Poppea in Amsterdam. In 2008 she sang Angelina in La Cenerentola with the Royal Swedish Opera and Dido and Aeneas with Christie and the Opéra-Comique in Paris. In 2009 she reprised Angelina in La Cenerentola with Oper Frankfurt and the Swedish Royal Opera, and Dido in Dido and Aeneas with Christie in Vienna and Amsterdam. In 2010, she sang the castrato role of Idamante in Idomeneo under Jérémie Rhorer at the Theatre de la Monnaie in Brussels, where her "feisty" portrayal of the prince was "as if to the gender born, her efforts rewarded by the inclusion of the usually cut aria 'No, la morte'. Vienna saw her in the title role of Serse by Handel in October 2011 at the Theater an der Wien, and the following season she sang Eduige in the Nicolas Harnoncourt-led production of Handel's Rodelinda at the same house, later released on DVD. Back in the city as Elena in La donna del lago in August 2012, she was "impressive... dealing with the vocal difficulties with aplomb and managing the extra dramatic demands made on her with genuine expressivity". She added Béatrice to her repertoire in 2013 in performances at Theater an der Wien of Berlioz's late opéra-comique.

She sang Gabriella in the Swedish musical Så som i himmelen, based on a 2004 film of the same name, with words by Kay Pollak and Carin Pollak and the score by Fredrik Kempe, which premiered at the Oscarsteatern in September 2018.

Concerts
Early recitals on Swedish Radio included Rachmaninov in 1994, The airconditioned nightmare by Olov Olofsson, songs by Gunnar de Frumerie, and an eclectic mix of Fauré, Debussy, Jolivet, Ravel, Bizet, Barber, Ives and Lehrer in 1996, Brahms lieder, and works by Carlid, Mahler and Berio in 1998. Ernman has performed several concert pieces as well. At the Salzburg Festival she sang Mozart’s "Waisenhausmesse" with conductor Frans Brüggen. She performed Berio’s "Folksongs" with the Stockholm Royal Philharmonic Orchestra under Carlo Rizzi, and at the Verbier Festival with Gustavo Dudamel. She sang the world premiere of "Nachtgesänge" by Fabian Müller with the Zurich Tonhalle Orchestra. In Minneapolis she sang Mozart’s "Requiem" with Arnold Östman.

2009 Melodifestivalen and Eurovision
On 28 November 2008, it was announced that Ernman would enter Melodifestivalen 2009 for the Eurovision Song Contest 2009, with the song "La voix" written by Fredrik Kempe. On 28 February 2009 Ernman competed in the 4th semi-final of Melodifestivalen in Malmö and became a finalist. She went on to win the final on 14 March at the Globe Arena in Stockholm, and to represent Sweden in the Eurovision Song Contest in Moscow. She qualified as a finalist on 12 May and performed in the finals on 16 May, where she finished 21st with 33 points. "La voix" was the first Swedish entry to contain a substantial amount of French lyrics; it was written by Ernman herself, who speaks French fluently.

Ernman revealed that the dress for her Eurovision performance cost 400,000 kronor (€37,471) and was made by designer Camilla Thulin. Singer Dea Norberg joined Ernman as one of the choirgirls.

Ernman later participated in the Second Chance round of Melodifestivalen 2015 as a guest singer for Behrang Miris entry.

Personal life
Ernman is married to Swedish actor Svante Thunberg. Their daughter, Greta, rose to worldwide prominence when she initiated the school strike for climate.

Ernman has been politically active in support of the Paris Agreement against climate change, writing a collaborative debate piece in Dagens Nyheter.

She co-authored, with her husband, the book Scener ur hjärtat (Scenes from the Heart) about her family, the environmental crisis and sustainability.