Jennifer Marie Morrison (born April 12, 1979) is an American actress, producer, director, and former child model. She is known for her roles as Dr. Allison Cameron in the medical-drama series House (2004–2012) and Emma Swan in the ABC adventure-fantasy series Once Upon a Time (2011–2017, 2018). She has also portrayed Zoey Pierson, one of Ted Mosby's love interests on the comedy series How I Met Your Mother; Winona Kirk, mother of James T. Kirk in the 2009 science-fiction film Star Trek; and Tess Conlon in the 2011 sports drama film Warrior. She made her feature film directorial debut with Sun Dogs (2017).

Early life
Morrison was born in Chicago, Illinois, and grew up in Arlington Heights, Illinois. She is the oldest of three children; her sister, Julia, is a singer-songwriter and music therapist, and her brother, Daniel, is a high school band director. Her father, David L. Morrison, is a retired music teacher and high school band director who was named Teacher of the Year by the Illinois State Board of Education in 2003.

Morrison attended South Middle School, and then graduated from Prospect High School (where her parents worked) in 1997. She was friends with writer Ian Brennan. She was an All-State clarinet player in the school's marching band, sang in the choir, and was a cheerleader in the school pep squad. She attended Loyola University Chicago, where she majored in Theatre and minored in English, graduating in 2000. She studied at the Steppenwolf Theatre Company before moving to Los Angeles, California to pursue a career in acting.

1990s
Morrison started her career as a child model, appearing in print advertisements for JCPenney and Montgomery Ward, and commercials for Rice Krispies and Mondo. She was featured on the cover of Sports Illustrated for Kids with basketball star, Michael Jordan, in May 1992. Morrison made her feature film debut at the age of 14 in the 1994 film Intersection, and later appeared as Samantha in Stir of Echoes (1999). 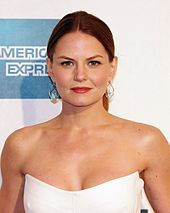 In 2004, Morrison won the role of immunologist Dr. Allison Cameron on House. She played this role for the first six seasons of the show, from 2004 to 2009. Morrison's character left in 2009 in the episode "Teamwork", but returned in the 2010 episode "Lockdown" to conclude Cameron's story. Morrison returned for the series finale "Everybody Dies" in 2012.

In 2006, Morrison starred in and produced the independent film Flourish. She is also one of the producers who found Glee during its early draft and brought it to attention of writer Ryan Murphy, who adapted it into a television series. Morrison did not stay involved creatively, but is credited as an associated producer on the first season for her involvement in finding it and helping it get into the right hands.

In 2007, Morrison appeared as Kirce James in the computer game Command & Conquer 3: Tiberium Wars, a character who frequently interacts with the player during the course of the GDI campaign. Her film projects that year included Big Stan and The Murder of Princess Diana, a television film based on the book of the same name by Noel Botham. Produced by Lifetime and Working Title Television, Morrison portrays an American journalist, Rachel, who witnesses the car crash which took the life of Diana, Princess of Wales.

In 2009, Morrison returned to the big screen, appearing in the opening scene of J. J. Abrams' Star Trek reboot as James T. Kirk's mother, Winona. After her contract on House was not renewed, it was announced in December 2009 that Morrison had won the role of Kate Keller, Helen Keller's mother, in the Broadway-bound revival of The Miracle Worker.

In the fall of 2010 Morrison appeared as a guest-star in the fourth episode of NBC's Chase. She played the role of Faith, a single mother-turned-fugitive, who embarks on a bloody killing spree across Texas with her little daughter. She then joined the cast of CBS's How I Met Your Mother as recurring character Zoey Pierson, a mischievous architecture nerd and love interest of main character Ted Mosby, and "the biggest female character we've maybe ever added to the show in Ted's life", according to executive producer Craig Thomas.

In 2011, Morrison appeared in Warrior, a film about two estranged brothers who enter a mixed martial arts tournament and are forced to confront their struggling relationship with each other and with their father. Morrison plays the wife of Joel Edgerton's character, struggling to keep her family together. Since October 2011, Morrison had a starring role in ABC's Once Upon a Time. She played the role of Emma Swan, a bail bonds collector who turns out to be the missing daughter of Snow White and Prince Charming.

In April 2016, Morrison launched her own film production company, Apartment 3C Productions, named after the apartment she shared with her friends during her time at Loyola University Chicago. She directed her first feature film, Sun Dogs, under this label during the summer of 2016. In December 2017, it was announced that Netflix had acquired worldwide streaming rights to the film.

In March 2017, it was announced that Morrison was cast as Stephanie in an off-Broadway revival of the play The End of Longing. The performance lasted from May 18 to July 1, 2017.

On May 8, 2017, Morrison announced via social media that she would not be returning to Once Upon a Time as a series regular for season seven, while also noting that she had agreed to return as a guest for one episode. That one episode was the season's second episode, which aired in October 2017. However, she ultimately returned for the series finale, which aired in May 2018.

Morrison co-starred in Amityville: The Awakening as Candice. Originally shot in 2014, the film was ultimately released on Google Play on October 12, 2017, with a limited theatrical release on October 28, 2017. In 2017, she made her feature film directorial debut with Sun Dogs, starring Michael Angarano, Melissa Benoist, and Allison Janney.

In June 2019, Morrison was confirmed to join the cast of This Is Us in a "substantial" recurring role for the coming fourth season.

Personal life
Morrison began dating her House co-star, Jesse Spencer, in 2004. Spencer proposed to Morrison at the Eiffel Tower on December 23, 2006, but in August 2007 they called off their engagement. Morrison started dating Prison Break star Amaury Nolasco in 2009; the relationship reportedly lasted three years. In summer 2012, Morrison and Sebastian Stan began dating, having met on the Once Upon A Time set. They dated for a year, breaking up in mid-2013.