Early life
Erin Marie Moran was born on October 18, 1960, in Burbank, California, and raised in nearby North Hollywood. She was the second youngest of six children born to Sharon and Edward Moran. Her father was a finance manager, and her interest in acting was supported by her mother, who signed her with an agent when she was five years old. Two of her brothers are actors: John Moran and Tony Moran, the latter of whom played Michael Myers during a scene in Halloween (1978). 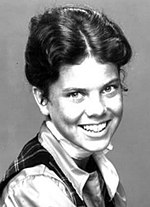 Moran's first acting role was at the age of five, in a television commercial for First Federal Bank. At the age of six, she was cast as Jenny Jones in the television series Daktari, which ran from 1966 to 1969. She made her feature-film debut in How Sweet It Is! (1968) with Debbie Reynolds, and made regular appearances on The Don Rickles Show in 1972, and guest appearances in The Courtship of Eddie's Father, My Three Sons, Bearcats!, Family Affair and in The Waltons, in an episode titled "The Song", in 1975. She also appeared in the television series Gunsmoke.

In 1974, at the age of 13, Moran was cast to play her best-known role, Joanie Cunningham on the sitcom Happy Days, the feisty younger sister of Richie Cunningham (Ron Howard). Moran continued the role in 1982, in the short-lived spin-off series Joanie Loves Chachi, alongside Scott Baio, although she later stated that she had only reluctantly agreed to star in the series; she would have preferred to remain with Happy Days. She won the Young Artist Award for Best Young Actress in a New Television Series for her role. After Joanie Loves Chachi's cancellation in 1983, she returned to Happy Days for its final season.

In 1983, Moran said in an interview that the Happy Days producers had pressured her to change from about the age of 15: they had "suddenly wanted me to lose weight and become this sexy thing.”

In the following years, Moran made several other television guest appearances, including The Love Boat, Murder, She Wrote, and Diagnosis: Murder, and starred opposite Edward Albert in the cult sci-fi horror film Galaxy of Terror (1981).

In 2008, she was a contestant on VH1's reality show Celebrity Fit Club, two years later, she made an appearance in the independent comedy feature Not Another B Movie (2010). In 2013, despite reports that she would be reunited with Happy Days co-stars Henry Winkler, Ron Howard, and Scott Baio in the fourth season of Arrested Development, she did not appear in the revamped Netflix series.

Happy Days lawsuit
On April 19, 2011, Moran, three of her Happy Days co-stars—Don Most, Anson Williams, and Marion Ross—and the estate of Tom Bosley, who died in 2010, filed a $10 million breach-of-contract lawsuit against CBS, which owns the show. The suit claimed that cast members had not been paid merchandising revenues owed under their contracts. Revenues included those from show-related items such as comic books, T-shirts, scrapbooks, trading cards, games, lunch boxes, dolls, toy cars, magnets, greeting cards, and DVDs with cast members' likenesses on the box covers. Their contracts entitled the actors to be paid five percent of the net proceeds of merchandising in the event that a single actor's likeness was used, and half that amount in the event that the cast members were pictured in a group. CBS said it owed the actors between $8,500 and $9,000 each, most of it from slot machine revenues, but the group said they were owed millions. The lawsuit was initiated after Ross was informed by a friend playing slots at a casino of a Happy Days machine on which players won the jackpot when five Marion Rosses were rolled.

In October 2011, a judge rejected the group's claim of fraud, thereby eliminating the possibility of recouping millions of dollars in damages. On June 5, 2012, a judge denied a motion to dismiss filed by CBS, which meant the case would go to trial on July 17 if not settled by then. In July 2012, the actors settled their lawsuit with CBS; each received a payment of $65,000 and a promise from CBS to continue honoring the terms of their contracts.

Personal life and death
In 1987, Moran married Rocky Ferguson; they divorced in 1993. Later that year, she married Steven Fleischmann.

After Happy Days and Joanie Loves Chachi were canceled, Moran moved from Los Angeles to the California mountains. She said in 1988 that she suffered from depression and was unable to gain acting roles. Moran confirmed news reports that her California home was foreclosed in 2010, following media claims that she had been served eviction papers and moved into her mother-in-law's trailer home in Indiana. In 2017, Variety magazine said she "had fallen on hard times in recent years. She was reportedly kicked out of her trailer park home in Indiana because of her hard-partying ways."

On April 22, 2017, authorities in Corydon, Indiana, were alerted about an unresponsive female, later identified as Moran. She was later pronounced dead at the age of 56. An autopsy report from the Harrison County coroner indicated the cause of death to be complications of stage four squamous cell carcinoma of the throat; toxicology testing showed that no illegal narcotics were involved in her death, and no illegal substances were found in Moran's home. Moran's husband, in an open letter released through her co-star Scott Baio, confirmed that she had first experienced symptoms of throat cancer around Thanksgiving 2016 and deteriorated rapidly from that point, and that the facilities that had unsuccessfully attempted to treat her cancer had not made anyone aware of how badly the cancer had metastasized.