Early life
Mitchell was born in Los Angeles, California. Her stepfather, Joseph Day Mitchell, and mother, Josephine Marian Mitchell (née Jenkins), are lawyers based in Dallas. Mitchell and her mother moved to Dallas, Texas in 1970, where her mother married Joseph Mitchell in 1975. Mitchell graduated from Booker T. Washington High School for the Performing and Visual Arts, a public magnet school. She is the eldest of three sisters, the others being Kristina Helen "Kristie" Mitchell (b. 1978) and Katherine Day "Kate" Mitchell (b. 1981).

She attended Stephens College, graduating in 1996 with a Bachelor of Fine Arts in acting, and then studied at the British American Drama Academy. 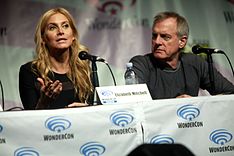 Mitchell had a recurring role as psychiatrist Dr. Kim Legaspi, the first lesbian lover of Dr. Kerry Weaver (Laura Innes) during the 2000–01 season of TV series ER. She played in the 2000 movie Frequency alongside Dennis Quaid and Jim Caviezel. She also played Angelina Jolie's hairdresser/lover in the movie Gia and had a one-episode role in House M.D. as a patient.

In 2006 she started on Lost, then in March 2009, Mitchell was cast in the ABC series V, a remake of the science-fiction television miniseries. Although ABC and Warner Bros. officials told the magazine she was only cast as a guest star, the announcement led to speculation and concern that Mitchell's character would be killed off at the end of Lost's fifth season, which ended on a cliffhanger that left the fate of her character unknown. Mitchell was later named the lead actress on V. Mitchell's character was killed off in the premiere of the sixth (and final) season of Lost, but returned for the two-part series finale.

V lasted for one more season, which premiered on January 4, 2011. Mitchell had a guest-starring role on Law & Order: Special Victims Unit in 2011 wherein she played June Frye. Mitchell starred in the film, Answers to Nothing in 2011 as Kate. In 2012, she joined the cast of the series Revolution as Rachel Matheson, replacing actress Andrea Roth, with whom Mitchell had worked for one episode on Lost. The series premiered on September 17, 2012, and ended in May 2014. She then recurred as the Snow Queen on the TV fantasy series Once Upon a Time in late 2014. 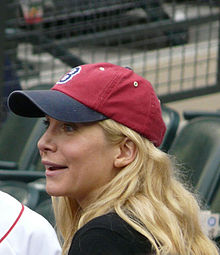 In 2016, Mitchell starred as Senator Charlene 'Charlie' Roan in the science-fiction horror film The Purge: Election Year. Also that year, it was announced Mitchell would join the main cast of the Freeform supernatural horror series Dead of Summer. She portrayed the character of Deb Carpenter. The series ended after one season.

Awards and honors
Mitchell has won the Saturn Award for Best Supporting Actress on Television in 2008, among other nominations. For her appearance as Dr. Juliet Burke on the series finale of Lost, Mitchell was nominated for the Primetime Emmy Award for Outstanding Guest Actress in a Drama Series in 2010.

Personal life
Between 1994 and 1999, Mitchell dated actor David Lee Smith and the two lived together in New York City. Whilst filming The Linda McCartney Story in 2000, Mitchell and co-star Gary Bakewell began dating and later became engaged, but the relationship ended in 2002.

She shares the same name as actress Elizabeth Banks' birth name, who changed her name to join the Screen Actors Guild because the name Elizabeth Mitchell was already taken.