She is known for such roles as Angel in the film Little Darlings, Polly in the film Only When I Laugh, and Barbara Weston in the TV sitcom Empty Nest. She won two Emmy Awards for her portrayal of teenage daughter Letitia "Buddy" Lawrence in the TV drama Family. 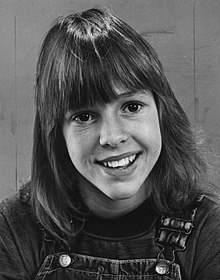 McNichol was born in Los Angeles, California, the daughter of James and Carolyn McNichol. Her father was a carpenter and her mother worked odd jobs to support the family, including as a secretary, cosmetics salesperson, and movie extra. McNichol is half Irish on her father's side and her mother is of Lebanese descent. She appeared with her brother Jimmy McNichol in commercials and later, on her own, in guest appearances on such other series as Starsky & Hutch; The Bionic Woman; Love, American Style; and The Love Boat, thanks to family friend Desi Arnaz. Her first stint as a series regular came in the role of Patricia Apple in the short-lived CBS television series Apple's Way (1974).

In 1977, she appeared in the TV special The Carpenters at Christmas, performing several musical numbers with the duo. In 1978, Jimmy and she made their own foray into music, recording the album Kristy and Jimmy McNichol for RCA Records (AFL1-2875). It included the singles "He's So Fine" (a cover of The Chiffons' 1963 hit), which peaked at number 70 on the Billboard chart, and "Page By Page". The McNichols promoted the album at New York's Studio 54 discothèque with other celebrities, such as Brooke Shields. In 1978, McNichol performed with Jimmy in a second Carpenters' holiday special, The Carpenters: A Christmas Portrait.

McNichol was one of the biggest teen stars of that era. She appeared on talk shows such as The Mike Douglas Show and Dinah!, and made several appearances on Battle of the Network Stars and other celebrity-based sports shows. In 1978, she starred in the acclaimed TV movie, Summer of My German Soldier.

McNichol began her film career in 1977, in Black Sunday, but her scenes were cut during editing. In 1978, she starred with Burt Reynolds and Sally Field in the black comedy, The End.

In 1980, she played the leading role in the hit coming-of-age movie Little Darlings, which co-starred Tatum O'Neal, Matt Dillon, and Cynthia Nixon. Her performance was acclaimed by many reviewers, including those who disliked the film itself. Later in 1980, she appeared with Dennis Quaid and Mark Hamill in The Night the Lights Went Out in Georgia, for which she received a six-figure salary—unprecedented for a teenager. In 1981, she co-starred in Neil Simon's Only When I Laugh, and was nominated for a Golden Globe Award for Best Supporting Actress.

McNichol was nominated for a Golden Raspberry Award for Worst Actress for her performance in the 1982 movie The Pirate Movie. That same year, she suffered an emotional breakdown while playing the lead role in the comedy-drama Just the Way You Are; filming had to be interrupted for a year. She later said that the breakdown had been caused by the pressures of her childhood career. as well as the pressure to hide her sexuality from the public.[according to whom?]

In 1986, McNichol appeared in Women of Valor, a TV movie about American nurses in a World War II Japanese POW camp. She made two theatrical films in 1988, You Can't Hurry Love and Two Moon Junction. In the same year, she began the role of Barbara Weston on Empty Nest, a spin-off of The Golden Girls. She left the show in 1992, but returned for its final episode in 1995. It was her last on-screen performance, though she went on to voice characters in the animated TV series Extreme Ghostbusters (1997) and Invasion America (1998).

In June 2001, McNichol announced that she had retired from acting. Her publicist released this statement:

A lot of people have wondered what I've been up to. I retired from my career after 24 years. My feeling was that it was time to play my biggest part – myself! I must say that it has been the best thing that ever happened to me. So many fans are disappointed that I'm not currently acting; however, some may not realize that the process I'm in at this time is necessary and vital for my personal happiness and well-being.

After her retirement, McNichol taught acting at a private school in Los Angeles and devoted much of her time to charity work. In 2012, McNichol ended years of speculation when she revealed that she is a lesbian and has lived with her partner for almost two decades. She made the statement in the hopes that her openness would help young people who are bullied because of their sexuality.