Mary Eileen McDonnell (born April 28, 1952) is an American film, stage, and television actress. She received Academy Award nominations for her roles as Stands With A Fist in Dances with Wolves and May-Alice Culhane in Passion Fish. McDonnell is well known for her performances as President Laura Roslin in Battlestar Galactica (for which she won a Saturn Award), First Lady Marilyn Whitmore in Independence Day, and Rose in Donnie Darko. She was featured as Captain Sharon Raydor during seasons 5–7 of the TNT series The Closer and starred as Commander Sharon Raydor in the spin-off series Major Crimes, on the same network.

Early life
McDonnell was born in Wilkes-Barre, Pennsylvania, and raised in Ithaca, New York. She is the daughter of Eileen (née Mundy; 1921–1990) and John "Jack" McDonnell (1923–1973), a computer consultant. Her siblings are Jane (1950–2005), Sally, Judith, Jackie, and John. She is of Irish descent. After graduating from the State University of New York at Fredonia, she attended drama school and joined the prestigious Long Wharf Theatre in New Haven, Connecticut, with which she worked for over 20 years.

Career
McDonnell won an Obie Award for Best Actress in 1981 for her work in the play Still Life. On Broadway, she has performed in productions of Execution of Justice, The Heidi Chronicles, and Summer and Smoke.

After more than 21 years of theater and television work, McDonnell made her film breakthrough in 1990 as Stands With A Fist, the daughter of American settlers raised by Sioux Indians, in Kevin Costner's Dances with Wolves. Portraying the adopted daughter of Graham Greene's character Kicking Bird, McDonnell, then 37, was only ten months younger than Greene and less than two years younger than Tantoo Cardinal, who played Black Shawl, her adoptive mother. She was nominated for an Academy Award for Best Supporting Actress for the role.

McDonnell's role in Passion Fish (1992) brought her another Academy Award nomination, this time for Best Actress in a Leading Role. Her other notable films include Grand Canyon (1991), Sneakers (1992), Independence Day (1996), and Donnie Darko (2001). McDonnell also starred with Patrick Swayze in the 1988 movie, Tiger Warsaw. In 1997 she played the judge in the film 12 Angry Men. The film also featured future Battlestar Galactica castmate Edward James Olmos.

On television, McDonnell had her first regular part in 1980 on the soap opera As the World Turns. She starred in 1984 on the short-lived medical comedy E/R, alongside Elliott Gould and George Clooney. Coincidentally, she guest-starred in 2001 on the NBC medical series of the same name, ER, which also featured Clooney. She was nominated for an Emmy Award for her role on the show as Eleanor Carter, the mother of Dr. John Carter played by Noah Wyle, who also had a role in Donnie Darko. She played Dr. Virginia Dixon, a surgeon with Asperger syndrome for three episodes of Grey's Anatomy in 2008 and 2009. 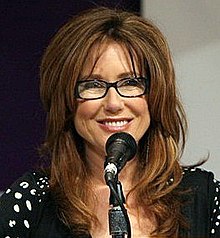 In 2003, McDonnell starred in the miniseries Battlestar Galactica as Laura Roslin. The miniseries led to the subsequent weekly series, with McDonnell reprising her Laura Roslin role. The series ended in March 2009. McDonnell received worldwide recognition for her performance in the show, part of which was shown when she was invited to the United Nations for a retrospective and discussion with Edward James Olmos (Admiral Adama).

McDonnell took part in a special session entitled Battlestar Galactica at the 2009 World Science Festival. The session also included Michael Hogan, as well as scientists Nick Bostrom and Kevin Warwick. In 2011, she appeared in the role of Kate Roberts, the mother of Emma Roberts's character in Scream 4.

From 2009 to 2012, McDonnell had a recurring role in The Closer as Capt. Sharon Raydor, a police captain in the Force Investigation Division, who often butts heads with Kyra Sedgwick's Golden Globe and Emmy award-winning character. McDonnell received an Emmy nomination for Outstanding Guest Actress in a Drama Series in 2011 for the role.

After The Closer wrapped up its final season 2012, McDonnell's character continued as the lead in the spin-off, Major Crimes, which debuted August 13, 2012 and finally finished in January of 2018 with the death of her character Sharon Raydor.