Marlee Beth Matlin (born August 24, 1965) is an American actress, author, and activist. She won the Academy Award for Best Actress for Children of a Lesser God (1986) and to date is the only deaf performer to have won an Academy Award; also, having won the award at the age of 21, she is the youngest winner in the category. Her work in film and television has resulted in a Golden Globe award, with two additional nominations, and four Emmy nominations. Deaf since she was 18 months old, due to illness and high fevers, she is also a prominent member of the National Association of the Deaf. Her longtime interpreter is Jack Jason.

Early life
Matlin was born in Morton Grove, Illinois, to Libby (née Hammer) and Donald Matlin (1930–2013), who was an automobile dealer.

She lost all hearing in her right ear and 80% of the hearing in her left ear at the age of 18 months. In her autobiography I'll Scream Later, she suggests that her hearing loss may have been due to a genetically malformed cochlea. She is the only member of her family who is deaf. She and her two older brothers, Eric and Marc, grew up in a Reform Jewish household. Her family roots are in Poland and Russia. Matlin attended a synagogue for the Deaf (Congregation Bene Shalom), and after studying Hebrew phonetically, was able to learn her Torah portion for her Bat Mitzvah. She was later interviewed for the book Mazel Tov: Celebrities' Bar and Bat Mitzvah Memories.

She also performed in children's theater as early as seven years old with the Center on Deafness in Chicago. She played "Dorothy" in The Wizard of Oz (1974), and performed in Mary Poppins and Peter Pan as the small company traveled through Illinois, Nebraska, and Indiana. At the age of thirteen, Matlin won second prize in the Chicago Center's Annual International Creative Arts Festival for an essay titled, "If I Was a Movie Star." Later she planned a career in criminal justice as she began attending Harper Junior College in Palatine, Illinois.

In her autobiography I'll Scream Later, she described two instances when she was molested: by her babysitter at age 11, and by her teacher in high school.

Career
Matlin made her stage debut at the age of seven, as Dorothy in an International Center on Deafness and the Arts (ICODA) children's theatre of The Wizard of Oz, and continued to appear with the ICODA children's theatre group throughout her childhood.

Her discovery by Henry Winkler during one of her ICODA theater performances ultimately led to her film debut in Children of a Lesser God (1986). The film received generally positive reviews and Matlin's performance as Sarah Norman, a reluctant-to-speak deaf woman who falls for a hearing man, drew high praise: Richard Schickel of TIME magazine wrote, "[Matlin] has an unusual talent for concentrating her emotions -- and an audience's -- in her signing. But there is something more here, an ironic intelligence, a fierce but not distancing wit, that the movies, with their famous ability to photograph thought, discover in very few performances." Roger Ebert of the Chicago Sun-Times was also impressed with Matlin, writing, "She holds her own against the powerhouse she's acting with, carrying scenes with a passion and almost painful fear of being rejected and hurt, which is really what her rebellion is about," and Paul Attasanio of the Washington Post said, "The most obvious challenge of the role is to communicate without speaking, but Matlin rises to it in the same way the stars of the silent era did -- she acts with her eyes, her gestures." Children of a Lesser God brought her a Golden Globe Award for Best Actress in a Drama and an Academy Award for Best Actress. Only 21 years old at the time, Matlin remains the youngest actress to receive the Oscar in the Best Actress category; she is still the only deaf Academy Award recipient in any category.

Two years later, she made a guest appearance on Sesame Street with Billy Joel performing a revised version of "Just the Way You Are" with lyrics by Tony Geiss. Matlin used sign language during the song and hugged Oscar the Grouch during the song's conclusion. One year after that, Billy Joel invited her to perform in his video for "We Didn't Start the Fire".

In 1989, Matlin portrayed a deaf widow in the television movie Bridge to Silence. In that role, she spoke in addition to using sign language. People magazine did not like the film, but praised Matlin's work, writing, "the beautiful, emotionally moving Matlin is too good for this well-intentioned but sentimental slop." She was nominated for a Golden Globe for her work as the lead female role in the television series Reasonable Doubts (1991–1993). Matlin was nominated for an Emmy Award for a guest appearance in Picket Fences (1992) and became a regular on that series during its final season (1996). She played Carrie Buck in the 1994 television drama Against Her Will: The Carrie Buck Story, based on the 1927 United States Supreme Court case Buck v. Bell 274 U.S. 200. In that role, Matlin portrayed a hearing woman for the first time in her career, which earned her a CableACE nomination for Best Actress.

Matlin later had recurring roles in The West Wing, and Blue's Clues. Other television appearances include Seinfeld ("The Lip Reader"), The Outer Limits ("The Message"), ER, The Practice, and Law & Order: Special Victims Unit. She was nominated for Primetime Emmy Awards for her guest appearances in Seinfeld, Law & Order: Special Victims Unit, and The Practice. 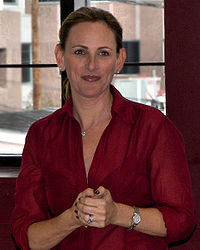 In 2002, Matlin published her first novel, titled Deaf Child Crossing, which was loosely based on her own childhood. She later wrote and published a sequel titled Nobody's Perfect, produced on stage at the John F. Kennedy Center for Performing Arts in partnership with VSA Arts in October 2007. In 2004, she starred in the movie What the Bleep Do We Know!? as Amanda. Also in 2003, she hosted the 3rd Annual Festival for Cinema of the Deaf in Chicago.

In 2006, she played a deaf parent in Desperate Housewives. She had a recurring role as Joy Turner's (who made many jokes about Matlin's deafness at her expense) public defender in My Name Is Earl and played the mother of one of the victims in an episode of CSI: NY. That same year, Matlin was cast in season 4 of The L Word as Jodi Lerner, a lesbian sculptor. She appeared in season 4 (2007), season 5 (2008), and season 6 (2009) as the girlfriend of one of the show's protagonists, Bette Porter, played by Jennifer Beals.

On February 4, 2007, and February 7, 2016, Matlin interpreted the "Star Spangled Banner" in American Sign Language at Super Bowl XLI in Miami, Florida, and at Super Bowl 50 in Santa Clara, California, respectively. In January 2008, she appeared on Nip/Tuck as a television executive.

In 2008, Matlin participated as a competitor in the sixth season of ABC's Dancing with the Stars. Her dance partner was newcomer Fabian Sanchez. Matlin and Sanchez were the sixth couple eliminated from the competition.

On November 8, 2009, Matlin appeared on Seth & Alex's Almost Live Comedy Show, hosted by Seth MacFarlane and Alex Borstein. After Borstein imitated Matlin calling MovieFone and singing "Poker Face," Matlin herself appeared and launched into a comical tirade against Borstein over being made fun of, and how she was not invited to provide her own voice for Family Guy. Matlin went on to voice Stella, Peter Griffin's coworker, in the Season 10 episode "The Blind Side;" Stella later became a recurring character.

In 2010, Matlin produced a pilot for a reality show she titled My Deaf Family, which she presented to various national network executives. Although they expressed interest, no network purchased rights to the show. On March 29, 2010, Matlin uploaded the pilot to YouTube and launched a viral marketing campaign.

On July 26, 2010, Matlin signed a speech at an event commemorating the 20th anniversary of the Americans with Disabilities Act.

In the following year, Matlin was a finalist on the NBC show The Celebrity Apprentice, competing to win money for her charity, The Starkey Hearing Foundation, finishing in second place. However, on one episode of The Celebrity Apprentice, "The Art of the Deal", which was transmitted on April 3, 2011, she raised more funds than had ever been raised for charity in a single event on any television show before, $986,000. Donald Trump, who was then hosting The Celebrity Apprentice, then donated an additional $14,000 to make the contribution an even million.

In 2013, Matlin played herself in No Ordinary Hero: The SuperDeafy Movie. As of January 2015, Matlin also acted as the ACLU's celebrity ambassador for disability rights.

As a "celebrity ambassador" for the ACLU, in attempts to bridge the gap between law enforcement and the deaf community, Matlin discussed the communication barriers when deaf individuals are stopped by the police.

Matlin played the recurring character of Melody Bledsoe on Switched at Birth. In September 2015, she made her Broadway debut in the revival production of the musical Spring Awakening.

Beginning in 2017, Matlin played the recurring role of Harriet on the Syfy television series, The Magicians.

On July 31, 2017, it was announced by Deadline that Matlin joined as a series regular in the third season of the ABC thriller Quantico. She starred in the role of ex-FBI agent Jocelyn Turner.

Personal life
Matlin is actively involved with a number of charitable organizations, including Easter Seals (where she was appointed an Honorary board member), the Children Affected by AIDS Foundation, Elizabeth Glaser Pediatric AIDS Foundation, VSA arts, and the Red Cross Celebrity Cabinet. She was appointed by President Clinton in 1994 to the Corporation for National Service and served as chair of National Volunteer Week. Matlin was a participant in the first-ever national television advertising campaign supporting donations to Jewish federations. The program featured "film and television personalities celebrating their Jewish heritage and promoting charitable giving to the Jewish community" and included Greg Grunberg, Joshua Malina, Kevin Weisman, and Jonathan Silverman. 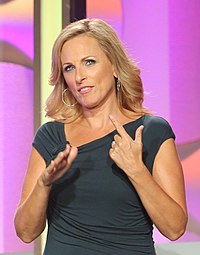 Matlin attended the 1987 Oscars to present the Academy Award for Best Actor. After signing her introduction in ASL, she spoke aloud the "names of the nominees" and of Michael Douglas, the winner.

On April 14, 2009, Matlin released an autobiography, I'll Scream Later. In it, she describes her drug abuse and how it drove her to check herself into the Betty Ford Center. She also tells about her rocky, two-year relationship with her significantly older Children of a Lesser God co-star William Hurt, who she claims was physically abusive to her. She also addresses the sexual abuse she suffered as a child at the hands of her female babysitter.

She enjoys a sense of humor about her deafness: "Often I’m talking to people through my speakerphone, and after 10 minutes or so they say, 'Wait a minute, Marlee, how can you hear me?' They forget I have an interpreter there who is signing to me as they talk. So I say, 'You know what? I can hear on Wednesdays.'"

Matlin has been a strong advocate for the rights of deaf people, accepting television roles only if producers commit to caption the films, remaining openminded and respectful of both signed and spoken communication preferences, and promoting telephone equipment specially designed for deaf persons. She has testified before the Senate Committee on Labor and Human Resources in support of the establishment of the National Institute on Deafness and Communication Disorders. Matlin has also been active in the fight against AIDS, the "Victory Awards" for the National Rehabilitation Hospital, and other causes.

In 1991, Matlin received the Bernard Bragg* Young Artists Achievement Award at the Annual International Creative Arts Festival sponsored by the Center on Deafness in Chicago.

Marriage
Matlin married Burbank police officer Kevin Grandalski on August 29, 1993, at the home of actor Henry Winkler, five days after her 28th birthday. They first met while she was filming a scene from Reasonable Doubts outside the studio grounds; the police department had assigned Grandalski to provide security and control traffic. They have four children: Sarah (born 1996), Brandon (born 2000), Tyler (born 2002), and Isabelle (born 2003).