Julianna Luisa Margulies (born June 8, 1966) is an American actress and producer. After several small television roles, Margulies achieved wide recognition for her role as Carol Hathaway on NBC's long-running medical drama ER, for which she won an Emmy Award. She also voiced Neera in Dinosaur (2000) and appeared in the miniseries The Mists of Avalon (2001).

In 2009, she took on the lead role of Alicia Florrick in the American legal drama The Good Wife on CBS. Her performance garnered acclaim: she won the Primetime Emmy Award for Outstanding Lead Actress in a Drama Series twice, a Golden Globe, and a Television Critics Association Award.

In 2018, Margulies had a co-starring role as Kitty Montgomery in the AMC dark comedy series Dietland.

Margulies has won eight Screen Actor Guild Awards, making her the second most awarded woman ever within SAG after Julia Louis-Dreyfus. In 2015, TIME featured her as one of the "100 Most Influential People in the World". She has been awarded a star on the Hollywood Walk of Fame.

Early life
Margulies was born in Spring Valley, New York, the youngest of three daughters. Her mother, Francesca (née Goldberg, later Gardner), was a ballet dancer and eurythmy teacher; her father, Paul Margulies, was a writer, philosopher, and Madison Avenue advertising executive. Her parents were both Jewish, descended from Jewish immigrants from Romania, Austria, Hungary, and Russia. Her mother converted to Christianity when the children were young, though Margulies still identifies herself as Jewish. The Margulies family lived in Israel for a period of time before Julianna's birth, then moved back to the Upper West Side of New York City.

Margulies attended grade school at Green Meadow Waldorf School and high school at High Mowing School. As a child, she lived in New York, France, and England. She obtained a BA from Sarah Lawrence College, where she appeared in several campus plays.

Career
Margulies made her feature film debut in Steven Seagal's film Out for Justice (1991), playing a prostitute. In 1994, Margulies was cast in the pilot episode of the NBC medical drama ER as Carol Hathaway, an emergency care nurse who, despondent over her relationship with pediatrician Doug Ross (George Clooney), attempted suicide. Her character was originally intended to die; however, the producers changed the plot and made Carol Hathaway a main cast member. At the same time Margulies had been offered an extended role on NBC's Homicide: Life on the Streets, after a two-episode appearance earlier in the year. Margulies chose ER and remained on the show for six seasons until 2000. She won an Emmy Award for Best Supporting Actress in a Television Drama in 1994, and continued to be nominated for this award every year during her tenure on ER. She was the only series regular cast member to win an Emmy Award.

In March 2012, Margulies broke her silence on her decision to leave ER at the height of her career and a $27 million paycheck. She revealed that although everyone said it would be "career suicide" not to return to the medical drama she had starred in for six years, she was never concerned about the consequences.

"I'm a smart girl," said Margulies. "I had a year's worth of work waiting and a mortgage completely paid at age 32. I was under no illusion that I was going to be some big movie star. My dad said, 'If you got hit by a bus tomorrow, were you living your life truthfully, or were you waiting to get rich?' If I died and my soul started leaving my body, would I be looking down going, 'You idiot. You could have gone to Prague, you could have been on Broadway'? Those are the things I wanted to do."

After leaving the series, Margulies worked on stage and screen. On stage, she appeared in a MCC Theater production of Kate Robin's Intrigue With Faye, a Lincoln Center production of Jon Robin Baitz's Ten Unknowns, and The Vagina Monologues. Her film work after ER included Evelyn with Pierce Brosnan and Ghost Ship (2002) with Gabriel Byrne and Ron Eldard. She starred as the protagonist and narrator (Morgaine) in the TNT miniseries The Mists of Avalon (2001) and participated in the documentary film Searching for Debra Winger (2002).

In 2004, she guest-starred in a two-episode arc in season 4 of the hit TV show Scrubs as Neena Broderick, an unscrupulous lawyer who sues Turk and has a brief sexual relationship with J.D. She starred in another miniseries on TNT, The Grid. In April 2006, she appeared in four episodes of the sixth season of The Sopranos, portraying realtor Julianna Skiff. In August 2006, she appeared in Snakes on a Plane as flight attendant Claire Miller. In December 2006, she played Jennifer Bloom in the Syfy Channel miniseries The Lost Room. 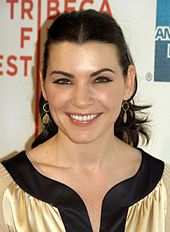 In an August 2006 interview with tvguide.com, Margulies said she was close to accepting an offer to return to ER for a four-episode arc, with Noah Wyle, that filmed in Hawaii during the 2005/06 season. However, she decided against it at the last minute. Margulies was invited to return during ER's final season, but the actress initially turned down the offer, saying she felt like she left Carol Hathaway in the perfect place and could not imagine bettering her departure episode. However, Margulies did return to ER for one episode during its 15th and final season.

She had a minor role in The Darwin Awards (2007). In 2008, Margulies starred in the legal series Canterbury's Law, a Fox mid-season replacement show. She played the title character, Elizabeth Canterbury, a lawyer described as a "tough-minded defense attorney who isn't afraid to push boundaries in order to protect innocent clients." She was also credited as a producer of the show. The series was severely affected by the 2007–2008 Writers Guild of America strike; it was cancelled by the network after only six episodes.

In 2009, Margulies began starring in the CBS legal drama The Good Wife. She played Alicia Florrick, an attorney returning to legal practice after her husband Peter Florrick (played by Chris Noth) resigned as Illinois State's Attorney amid a sex and corruption scandal. Beginning in 2011, starting with the third season, Margulies was credited as a producer of The Good Wife. The series ended in May 2016.

Since 2013, the actress does voiceovers for a Chase credit card commercial. In 2014, Margulies narrated "Women in Business", an episode of season 2 of Makers: Women Who Make America. In 2015, TIME featured Margulies as one of the "100 Most Influential People in the World." It noted her work to get Erin's Law, concerned with child sexual abuse, passed in every US state.

In 2018, Margulies co-starred in the dark comedy series Dietland on AMC as Kitty Montgomery - a nasty, razor-thin fashionista who employs an overweight woman for menial tasks and enjoys torturing her no end (especially about her weight).

In 2019, Margulies was slated to reprise the role of Alicia Florrick for three episodes of The Good Fight, a spin-off of The Good Wife. However, negotiations broke down over the question of Margulies' salary, with CBS offering to pay her at the guest star rate instead of the same rate she had been paid on The Good Wife. She stated that: "I watch the show, I love the show. But I'm not a guest star. You don't pay me a guest-star salary. I would get a guest-star salary if I went and did SVU — it's not my show. I wouldn't ask for what I got paid as Alicia Florrick. I also know for a fact that any male star who got asked to go on a spinoff of their show would have been offered at least $500,000. I know that for a fact." 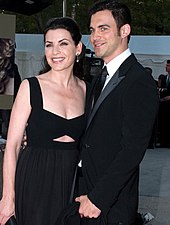 From 1991 to 2003, Margulies dated actor Ron Eldard, whom she met in an acting class. On November 10, 2007, Margulies married attorney Keith Lieberthal, the son of academic Kenneth Lieberthal, in Lenox, Massachusetts. In January 2008, she gave birth to their son named Kieran. They reside in Manhattan.