Bailee Madison (born October 15, 1999) is an American actress. She first gained acclaim for her role as May Belle Aarons in the fantasy drama film Bridge to Terabithia (2007). Madison received further recognition for her starring roles as Isabelle in the war drama film Brothers (2009), Sally Hurst in the horror film Don't Be Afraid of the Dark (2010), Maggie in the romantic comedy film Just Go with It (2011), Harper Simmons in the comedy film Parental Guidance (2012), Clementine in the fantasy film Northpole (2014), and Kinsey in the slasher horror film The Strangers: Prey at Night (2018).

On television, she appeared as Maxine Russo in the fantasy sitcom Wizards of Waverly Place (2011), young Snow White in the fantasy drama series Once Upon a Time (2012–16), Hillary Harrison in the sitcom Trophy Wife (2013–14), and Sophia Quinn in the drama series The Fosters (2014–16). From 2015 to 2019, Madison starred as Grace Russell in the Hallmark Channel comedy-drama series Good Witch.

Early life
Madison was born in Fort Lauderdale, Florida, the youngest of seven children. She has four brothers and two sisters. Her older sister, Kaitlin Riley, is also an actress. Her mother is Patricia Riley. She began her career when she was two weeks old in an Office Depot commercial. Since then, she has appeared in several national commercials for major companies including Disney, SeaWorld, and Cadillac. She also serves as a national youth spokesperson for the childhood-cancer charity Alex's Lemonade Stand Foundation.

Career
2006–2012: Early career and breakthrough
Madison made her major motion picture debut in the movie Lonely Hearts, in which she plays Rainelle, a girl thrown into the midst of a world of crime. Madison also has a significant role in the Disney movie Bridge to Terabithia, based on the children's book. She plays May Belle Aarons, the younger sister of the lead male character played by Josh Hutcherson. She also appears in the independent film Look as Megan, a girl who is being watched and followed by a kidnapper. 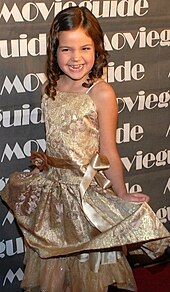 Madison had a small role in Terminator: The Sarah Connor Chronicles during the season 1 finale "What He Beheld" as a girl who becomes part of a short-lived hostage situation. In the DVD extras it is said that they thought about changing the role slightly because of its violent nature, but she insisted that they not. Madison appeared in Nickelodeon's made-for-TV movie, The Last Day of Summer. She plays a girl who helps a friend during a difficult time. Another Nickelodeon production she had a role in was the television Christmas special Merry Christmas, Drake & Josh. She played a girl who lived with a foster family.

Madison is seen in a featured supporting role in the 2009 film Brothers as Isabelle Cahill, the older daughter of Captain Sam Cahill (Tobey Maguire) and Grace Cahill (Natalie Portman). For her portrayal in the movie, she was nominated for both a Saturn Award and a BFCA Critics' Choice Award. In 2010, Madison was in the movie Letters to God, where she portrayed Samantha Perryfield, best friend of the lead character who is fighting cancer.

She is seen in Conviction playing the younger version of Hilary Swank's character, Betty Anne Waters. She can be seen in the episode "Locum" from Law & Order: Special Victims Unit as Mackenzie Burton, a girl who was adopted and feels like she is only filling the place of her parents' older daughter who was abducted years ago. She appeared in three episodes of the children's horror series, R.L. Stine's The Haunting Hour.

In 2011, Madison had a recurring role in the Disney Channel Original Series Wizards of Waverly Place as Maxine, the girl form of Max Russo. She also appeared in Just Go with It, alongside Adam Sandler and Jennifer Aniston, as Maggie Murphy, a young girl who wants to become an actress. Madison can be seen in the drama film, An Invisible Sign as the younger version of Jessica Alba's character Mona Gray. She starred in her first leading role in the horror film, Don't Be Afraid of the Dark, alongside Katie Holmes and Guy Pearce where she portrayed Sally Hurst, a lonely withdrawn child who is sent to live with her father and his new girlfriend.

In 2012, Madison appeared in the Hallmark film A Taste of Romance alongside Teri Polo and James Patrick Stuart. She also had a guest role as the younger version of Ginnifer Goodwin's character Snow White in the TV series Once Upon a Time. She also could be seen as the main character in the film Cowgirls n' Angels where she played the feisty and rebellious Ida Clayton who has fantasies of finding her father, a rodeo rider. Madison appeared in another Hallmark film entitled Smart Cookie as Daisy, an eager girl hoping to prove herself as a Girl Scout. In December, she appeared in the family comedy film Parental Guidance, alongside Billy Crystal and Bette Midler. 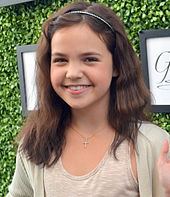 In 2013, Madison began playing Hillary on the TV sitcom Trophy Wife, replacing Gianna LePera who played the character in the pilot. In 2014, she began playing the recurring role of Sophia Quinn in the ABC Family drama The Fosters. In 2015, she began playing Grace Russell, the daughter of Cassie Nightingale, in the Hallmark series Good Witch. Madison continued in the role until the end of the fifth season in 2019.

In 2017, it was announced that Madison would star in an adaptation of Rachel Bateman's novel Someone Else's Summer.

In 2018, Madison portrayed the role of Kinsey, a rebellious child in slasher horror film The Strangers: Prey at Night. She starred alongside Christina Hendricks and Martin Henderson, as her parents. The film received a mixed response from critics and was relatively successful at the box office.

Other ventures
Madison has worked in voice over, with such projects as Breathe Bible.

Madison has served as the national youth spokesperson for Alex's Lemonade Stand Foundation since 2010, an organization that encourages kids to fundraise and spread awareness of pediatric cancer by running their own lemonade stands. In January 2018, Madison's first novel was published, Losing Brave, a Young-Adult Mystery which was co-written with Stefne Miller. Since November 2018, she has co-hosted the podcast Just Between Us with her sister Kaitlin Vilasuso.