Sonja Sohn (born Sonja Williams; May 9, 1964) is an American actress and director best known for her roles as Detective Kima Greggs on the HBO drama The Wire and Detective Samantha Baker on the ABC series Body of Proof. She is also known for having starred in the independent film Slam, which she co-wrote. Her role on The Wire led to her current work as the leader of a Baltimore community initiative called ReWired for Change.

Early life
Sohn was born Sonja Williams in Fort Benning, Georgia. Her mother was Korean and her father is black. Her parents met when her father was stationed in South Korea after the Korean War. She attended and graduated from Warwick High School in Newport News. 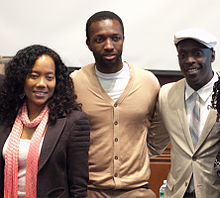 Before she was an actress, Sohn was a slam poet. While performing her work on stage, she was spotted by Marc Levin who offered her a role in his film Slam. She also wrote lyrics and co-wrote the script for the film. It went on to win the Grand Jury Prize for Dramatic Film at the Sundance Film Festival. After debuting in Slam, Sohn appeared in minor roles in films such as Shaft and Bringing Out the Dead. She also starred in independent films Perfume, G and The Killing Zone. Through the five seasons of the HBO series The Wire, she held a starring role as Detective Kima Greggs. She struggled during the first season of The Wire and considered quitting as she had trouble recalling her lines. She has also guest starred on many episodes of Cold Case as "Toni Halstead". She won the supporting television actress award at the 2008 Asian Excellence Awards for her character on The Wire.

She had a supporting role in the Hollywood film Step Up 2: The Streets. In 2008-09, she was a guest star in the ABC series Brothers & Sisters, and in 2010 she appeared in an episode of CBS series The Good Wife. In 2011, she was a guest star on the show Bar Karma. She played Detective Samantha Baker in the first two seasons of the medical drama television series Body of Proof with Dana Delany and Jeri Ryan, which premiered on ABC on March 29, 2011.

On May 30, 2014, it was announced that Sohn would be joining season 2 of The Originals, in a recurring role as the witch Lenore a.k.a. Esther Mikaelson.

Sohn made her directorial debut with the 2017 HBO documentary Baltimore Rising about the 2015 Baltimore protests and community organizing that arose in response to police violence.

Activism
Previously involved in political activism (she campaigned in North Carolina in support of Barack Obama's 2008 presidential bid), Sohn took a break from acting in 2009 to concentrate on social issues. She is the founder and CEO of the Baltimore-based reWIRED for Change, an outreach program intended to communicate with (and ultimately rehabilitate) at-risk youth involved in criminal activity. The program is run out of the University of Maryland School of Social Work and uses episodes of The Wire as a teaching tool, encouraging the participants to examine and query their lives and past actions. Other actors and writers involved with The Wire serve as board members. In 2011, she was presented with the Woman of the Year award from the Harvard Black Men's Forum.

Personal life
As of 2006, Sohn was living with her husband, Adam Plack, and daughter, Sophia, 16, who was attending Baltimore School for the Arts. Sohn has another daughter, Sakira, 20, who lived in New York at that time.