Early life
Röhm was born in Düsseldorf, West Germany, to Lisa Loverde and Eberhard Röhm. Her father was a German-born partner at the law firm of Duane Morris LLP New York, and the family moved to New York City before her first birthday. Her mother was an American scriptwriter, who once wrote for the TV soap opera Guiding Light. Röhm's parents divorced when she was 8 or 9. Her maternal grandfather was an Italian immigrant.

Röhm attended grades 11–12 at St. Andrew's-Sewanee School, a small private boarding school in Sewanee, Tennessee, and then graduated from Sarah Lawrence College, where she studied writing and European History. 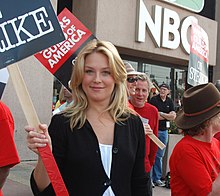 Röhm received her first TV acting role in 1997, as Dorothy Hayes in the American soap opera One Life to Live. She had a starring role in the 1999 BBC Northern Ireland miniseries Eureka Street, then portrayed recurring character Detective Kate Lockley in the first two seasons (1999 to 2001) of the TV series Angel. While appearing in Angel, Röhm also had a regular role in the only season (2000–01) of the Turner Network Television drama series Bull.

Röhm recently completed a role on NCIS (season 14) with Mark Harmon, Netflix's Flaked opposite Will Arnett and the film Once Upon a Time in Venice. The Oath is coming up next for her on Sony's Crackle TV, as well as Love Is All You Need?, Will Gardner, and The Tribes of Palos Verdes with Jennifer Garner.

Personal life
Röhm was a longtime avid equestrienne, but gave up professional equestrianism after a 2005 accident that she spoke about in a 2011 episode of the Biography Channel series Celebrity Close Calls. She did have a horse-riding scene with Mark Harmon in the aforementioned NCIS episode.

Röhm has included a blog on her personal website, where she often wrote about life with her daughter and fiancé. On January 6, 2011, People added Röhm's blog to the "Moms & Babies" section of its website.