AnnaSophia Robb (born December 8, 1993) is an American actress, singer, and model. She began as a child actress on television, making her leading debut as the titular role in Samantha: An American Girl Holiday (2004). She made her feature film debut in Because of Winn-Dixie (2005), followed by the supporting role of Violet Beauregarde in Tim Burton's Charlie and the Chocolate Factory (2005). Her performance as Leslie Burke in Bridge to Terabithia (2007), garnered her recognition and praise, and two Young Artist Awards. Her subsequent film roles include Race to Witch Mountain (2009), Soul Surfer (2011), and The Way, Way Back (2013). She received wider recognition and praise for playing the lead role of Carrie Bradshaw on The CW's series The Carrie Diaries (2013–2014). In 2019, she played the role of Gypsy Rose Blanchard’s neighbor, Lacey, in the Hulu miniseries, The Act.

Early life
Robb was born in Denver, Colorado, the daughter of Janet, an interior designer, and David Robb, an architect. She was named after her maternal great-grandmother, Anna Sophie, and her paternal grandmother, Anna Marie. Robb is of Danish, English, Irish, Scottish, and Swedish descent. She grew up in a devout Christian home and was home-schooled. She started taking an interest in acting and began by performing in front of 500 people on her church stage. She competed in dance and gymnastics for four and a half years, but quit to focus on acting. In 2009, the Arapahoe Herald reported that she was attending Arapahoe High School in Centennial, Colorado. She graduated in 2012.

At age eight, Robb was scouted by an agent, and she and her mother drove to Los Angeles. After several auditions, Robb was invited to appear in a national commercial for Bratz dolls. After appearing in a commercial for McDonald's, Robb had a small role in the "Number One Fan" episode of the television series Drake & Josh. Her first major role was the title character in the television special Samantha: An American Girl Holiday. She wore a long brown wig for the role.

Robb's two big-screen appearances in 2005 were adaptations of popular children's books. She starred as Opal in Because of Winn-Dixie, and as the competitive and rude Violet Beauregarde in Tim Burton's remake of Charlie and the Chocolate Factory. The latter was a major box-office success worldwide, and helped escalate Robb's popularity among preteen audiences. 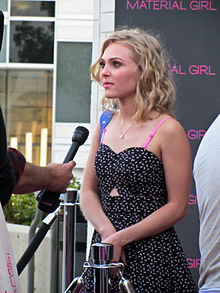 In 2005, Robb was the face of Trad Clothing, helping to design and model a fashion line for girls. In 2006, she had a guest role on the cartoon show Danny Phantom as the voice of Danielle "Dani" Fenton. Robb played Leslie Burke in Bridge to Terabithia with Josh Hutcherson, which opened in U.S. theaters on February 16, 2007. She recorded a song for the soundtrack titled, "Keep Your Mind Wide Open", and the accompanying video received rotation on the Disney Channel. The song peaked at number 90 on the Billboard Hot 100 during the week of March 1, 2007, giving Robb her first charting single. Robb was a fan of the book before being cast in the role, saying that it "touched me in a way I hadn't been touched by a book before".

Robb went on to appear in The Reaping, Have Dreams, Will Travel, Jumper, and Spy School. Despite negative reviews of the film overall, Robb's performance in Sleepwalking garnered praise. Time film critic Richard Schickel said: "There is a wonderful range to Robb's work...this is extraordinarily mature acting from someone this young and she wins our sympathy without once begging for it." In 2008, she recorded the voice of Mary Magdalene in The Word of Promise: Next Generation – New Testament: Dramatized Audio Bible. She also starred in Race to Witch Mountain (2009). In 2010, she appeared in The Space Between. She then starred in Soul Surfer, playing Bethany Hamilton, who continued to surf after losing her arm in a shark attack.

In May 2011, Robb was announced to star as Wendy in a new and dark take on the classic story about Peter Pan, tentatively titled Pan, but later dropped out of the project. It was reported on February 3, 2012, that Robb had landed a role in Life at These Speeds. Later that month, Robb was cast as Carrie Bradshaw in The CW's Sex and the City prequel, The Carrie Diaries, and appeared in the summer comedy, The Way, Way Back.

In October 2013, Robb started filming for A Conspiracy on Jekyll Island, starring alongside Frank Grillo, Ed Westwick, Dianna Agron, John Leguizamo, Minnie Driver, and Maggie Q. The film is directed by Aram Rappaport and produced by Hilary Shor, Atit Shah, and Aaron Becker. It was released as The Crash in 2017.

Robb played the role of Alice Green in the PBS Civil War historical drama series Mercy Street from 2016 to 2017.

Personal life
Robb enrolled at New York University in 2014 and graduated in 2018.