Lisa Deanna Rinna (born July 11, 1963) is an American actress and television personality. She is best known for her roles as Billie Reed on the NBC daytime soap opera Days of Our Lives and Taylor McBride on Fox's television drama Melrose Place, and as one of the stars of Bravo's hit reality television series The Real Housewives of Beverly Hills. From 2002 to 2006, she was the host of Soapnet's talk show Soap Talk. Rinna has also been a contestant on The Celebrity Apprentice and Dancing with the Stars, and she had guest roles on Entourage, The Middle, Veronica Mars, The Hogan Family, Community, and 8 Simple Rules.

Early life
Lisa Rinna was born on July 11, 1963 in Newport Beach, California, as the daughter of Lois and Frank Rinna. She is of Italian, Portuguese, and English descent.

At age seven, her family relocated to Medford, Oregon, when her father was transferred there for job-related reasons, and she spent the remainder of her childhood there. Rinna graduated from Medford Senior High School in 1981. After graduating, Rinna moved to San Francisco, California to pursue a career as a model.

Career
Acting
At age 22, Rinna appeared in the music video for John Parr's single, "Naughty Naughty," as the passenger in Parr's car. Rinna later appeared as the girlfriend of Jason Bateman's character in several episodes of The Hogan Family in 1990. In 1992, she received national recognition when she first starred on NBC's Days of Our Lives as Billie Reed. She departed in 1995, though reprised the role from 2002 to 2003. She later switched from daytime to primetime, portraying Taylor McBride on Aaron Spelling's Melrose Place from 1996 to 1998. Rinna has starred in two projects opposite husband Harry Hamlin, the teen crime-drama Veronica Mars, and the Lifetime movie Sex, Lies & Obsession. Her previous Lifetime movie, Another Woman's Husband, boasted one of the highest ratings for a movie on Lifetime since 1999. She has also appeared in Hannah Montana, in the role of Mr. Dontzig's cousin Francesca. She also guest-starred on an episode of Movie Stars for the WB, the first ever on-screen appearance she shared opposite her husband. Rinna got her first role in the feature film Good Advice, starring Charlie Sheen and Jon Lovitz, and more recently, she appeared in an episode of HBO's Entourage. In 2009, Rinna stated that she would love to reprise her role of Taylor McBride on CW's revival Melrose Place, if given the offer; however, the series was cancelled after only one season. 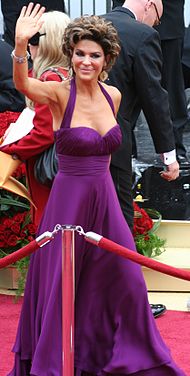 In February 2009, Rinna starred in the Broadway production of Chicago, in the role of Roxie Hart, alongside her husband, who played the role of Billy Flynn. In 2011, Rinna guest starred on Nickelodeon's Big Time Rush as Brooke Diamond. Later that year, it was confirmed that Rinna would again reprise the role of Billie Reed on Days Of Our Lives. She reported to work in December, with her first scenes airing March 9, 2012. However, in August 2012, it was confirmed by Huffington Post that Rinna would once again leave the soap to develop a panel-focused talk show.

Hosting and reality television
In 2002, Rinna was named co-host of Soap Talk, the daily lifestyle show that aired on SOAPnet, for which she received a Daytime Emmy Award nomination. In June 2006, SoapNet announced that it was canceling Soap Talk after four seasons due to low ratings.

Rinna competed in the second season of Dancing with the Stars with professional Louis van Amstel. But the Rinna-Van Amstel team was eliminated in Round Seven based on audience voting, despite having higher marks from the judges than fellow celebrity dancer Jerry Rice. Lisa was also featured as a guest judge on the fourth episode of RuPaul's Drag Race.

In 2008, TV Guide reported that Rinna and Hamlin had signed a deal to create a reality TV series based around their family life. The series, titled Harry Loves Lisa, premiered on TV Land on October 6, 2010 and ran for 6 episodes.

In 2011, Rinna participated in Season 4 of The Celebrity Apprentice. She was eliminated after being the project manager on the 2nd task, writing and performing a children's book. Rinna returned to the show in its sixth season as one of the "All-Stars" contestants. After being eliminated from that roster, she appeared on the May 13, 2013 episode of Late Night with Jimmy Fallon with Lil Jon to talk about their time on the show.

In 2014, Rinna joined the cast of The Real Housewives of Beverly Hills for the show's fifth season. Earlier in the same year, she had been one of the contestants in the progressive game show/talent competition Sing Your Face Off. (It was not known, as of the middle of August 2015, whether Rinna had formed any plans to do any singing as herself.)

Modeling
In 1998, Rinna, while six months pregnant with Delilah Belle Hamlin, the first of Harry Hamlin's and her two daughters, posed for a nude pictorial ("Melrose Mom," its title, paid tribute to her role in Melrose Place) and cover shoot for the September issue of Playboy Magazine. She later recounted the instructions given to her by Playboy photographer Deborah Anderson: "'I do not want you long and sinewy and angular and muscular. I want you soft...' This was really hard for me because being 35 years old and posing for Playboy, you want to amp it up." In May 2009, she posed again for Playboy and, this time, was also its cover model. 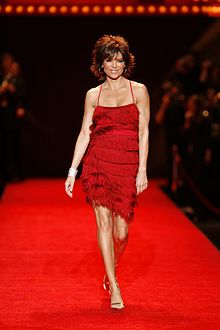 She has also graced the covers of CVLUX, Living Well, Soap Opera Magazine and Soap Opera Digest. Rinna has appeared in commercials and print ads throughout her career. In 2008, she appeared in print ads for Mars Inc's M&M candies with Joey Fatone as part of the "There's an M&M in everyone" advertising campaign. In 2012, Rinna appeared in an infomercial for abdominal muscle toner "The Flex Belt" alongside Adrianne Curry, Denise Richards and Janet Evans. She has appeared in a television commercial for Taco Bell and infomercial for Winsor Pilates. In 2012 to benefit the charity Dress for Success, she modeled an adult incontinence brief made by Depend under a tight fitting evening gown. She appeared in print ads and commercials for Depend and, according to reports, Depend paid her $2 million to be their celebrity spokesperson. In September 2019, she walked the runway for Kyle Richards' and Shahida Clayton new women's clothing brand at New York Fashion Week.

In 2008, she released a series of workout videos called Dance Body Beautiful.

Fashion
Rinna and her husband Harry Hamlin jointly owned the Belle Gray clothing boutique in Sherman Oaks, California in 2011. They closed the store in 2012 because by then, both had grown too busy with their respective acting careers for either to be able to spare the time they needed to manage the store any longer. In June 2019, Rinna launched an activewear collaboration with retailer Goldsheep. Proceeds from the collaboration benefited The Trevor Project, a national organization providing crisis intervention and suicide prevention services to LGBTQ youth.

QVC
In April 2012, Lisa brought her collection to QVC as the Lisa Rinna Collection, which has been a success.

Personal life
Rinna married actor Harry Hamlin in 1997 and is his third wife. Rinna has a 38 year old step son from one of Hamlin's previous relationships. The couple have 2 daughters, Delilah Belle (born June 10, 1998) and Amelia Gray (born June 13, 2001).

She has acknowledged having plastic surgery and having silicone, botox and Juvéderm injections. Although she remains fond of botox, she has said that using Juvéderm was a mistake.