Donna Reed (born Donna Belle Mullenger; January 27, 1921 – January 14, 1986) was an American film, television actress and producer. Her career spanned more than 40 years, with performances in more than 40 films. She is well known for her role as Mary Hatch Bailey in Frank Capra's 1946 film It's a Wonderful Life. In 1953, she received the Academy Award for Best Supporting Actress for her performance as Lorene Burke in the war drama From Here to Eternity.

Reed is known for her work in television, notably as Donna Stone, a middle-class American mother and housewife in the sitcom The Donna Reed Show (1958–66), in which her character was more assertive than most other television mothers of the era. She received numerous Emmy Award nominations for this role and the Golden Globe Award for Best TV Star in 1963. Later in her career, Reed replaced Barbara Bel Geddes as Miss Ellie Ewing Farlow in the 1984–85 season of the television melodrama Dallas; she sued the production company for breach of contract when she was abruptly fired upon Bel Geddes' decision to return to the show.

Early life
Reed was born Donna Belle Mullenger on a farm near Denison, Iowa, the daughter of Hazel Jane (née Shives; July 16, 1899 – July 17, 1975) and William Richard Mullenger (July 4, 1893 – July 15, 1981). The eldest of five children, she was raised as a Methodist. In 1936, while she was a sophomore at Denison (Iowa) High School, her chemistry teacher Edward Tompkins gave her the book How to Win Friends and Influence People. The book is said to have greatly influenced her life. Upon reading it she won the lead in the school play, was voted Campus Queen and was in the top 10 of the 1938 graduating class. Tompkins went on to work on the Manhattan Project.

After graduating from Denison High School, Reed planned to become a teacher but was unable to pay for college. She decided to move to California to attend Los Angeles City College on the advice of her aunt.

While attending college, she performed in various stage productions, although she had no plans to become an actress. After receiving several offers to screen test for studios, Reed eventually signed with Metro-Goldwyn-Mayer; however, she insisted on finishing her education first.

Career
MGM
In 1941 after signing with Metro-Goldwyn-Mayer, Reed made her film debut in The Get-Away opposite Robert Sterling; she was billed as Donna Adams.

MGM soon changed her name to Donna Reed, as there was anti-German feeling during World War II. "A studio publicist hung the name on me, and I never did like it," Reed once said. "I hear `Donna Reed' and I think of a tall, chic, austere blonde that isn't me. `Donna Reed' - it has a cold, forbidding sound."

Reed had a support role in Shadow of the Thin Man (1941) and in Wallace Beery's The Bugle Sounds (1942). Like many starlets at MGM, she played Mickey Rooney's love interest in an Andy Hardy film, in her case the hugely popular The Courtship of Andy Hardy (1942). She was second billed in a children's film, Mokey (1942).

Reed played a love interest in Calling Dr. Gillespie (1942) and Apache Trail (1942), then did a thriller with Edward Arnold, Eyes in the Night (1942), directed by Fred Zinnemann.

Reed had a support role in The Human Comedy (1943) with Mickey Rooney, a big film for MGM. She was in Dr. Gillespie's Criminal Case (1943) and The Man from Down Under (1943), and was one of many MGM stars to make cameos in Thousands Cheer (1943). Her "girl-next-door" good looks and warm onstage personality made her a popular pin-up for many GIs during World War II. She personally answered letters from many GIs serving overseas.

Reed was the love interest in See Here, Private Hargrove (1944) and Gentle Annie (1945), a Western. She was in The Picture of Dorian Gray (1945) and played a nurse in John Ford's They Were Expendable (1945), the love interest of John Wayne. MGM were very enthusiastic about Reed's prospects at this time.

Reed collaborated with her Denison High school chemistry teacher Edward R. Tompkins (who, as noted earlier, worked on the Manhattan Project) on the 1947 MGM film The Beginning or the End, which dealt with the history and concerns of the atom bomb. Reed helped provide the story but did not appear in the final film.

Reed was top billed in a romantic comedy Faithful in My Fashion (1946) with Tom Drake which lost money.

MGM lent her to RKO Pictures for the role of Mary Bailey in Frank Capra's It's a Wonderful Life. The film has since been named as one of the 100 best American films ever made by the American Film Institute and is regularly aired on television during the Christmas season. Reed later said it was "the most difficult film I ever did. No director ever demanded as much of me."

Back at MGM she appeared in Green Dolphin Street (1947) with Lana Turner and Van Heflin, a big hit.

Reed was borrowed by Paramount to make two films with Alan Ladd, Beyond Glory (1948), where she replaced Joan Caulfield at the last moment, and Chicago Deadline (1949). In 1949 she expressed a desire for better roles.

Columbia
In June 1950 Reed signed a contract with Columbia Studios. She appeared in two films which teamed her with John Derek, Saturday's Hero (1951) and Scandal Sheet (1952). She had a cameo in Rainbow 'Round My Shoulder (1952).

Reed was the love interest of Randolph Scott in Hangman's Knot (1952), then was borrowed by Warner Bros for Trouble Along the Way (1953) with Wayne. She was loaned out to play John Payne's love interest in Edward Small's Raiders of the Seven Seas (1953).

Reed played the role of Alma "Lorene" Burke, girlfriend of Montgomery Clift's character, in the World War II drama From Here to Eternity (1953). The role earned Reed an Academy Award for Best Supporting Actress for 1953.

The qualities of her parts did not seem to improve: she was the love interest in The Caddy (1953) with Martin and Lewis at Paramount; Gun Fury (1953) with Rock Hudson; Three Hours to Kill (1954) with Dana Andrews; and They Rode West (1954) with Robert Francis. Reed returned to MGM to act in The Last Time I Saw Paris (1954).

She continued to appear in features, usually as the love interest, in The Far Horizons (1955) at Pine-Thomas Productions, playing Native American Sacagawea; The Benny Goodman Story (1956) with Steve Allen at Universal, playing Goodman's wife; Ransom! (1956) at MGM as Glenn Ford's wife; Backlash (1956), a Western at Universal with Richard Widmark; Beyond Mombasa (1957), shot in Kenya with Cornel Wilde, during which she was injured while making the film; and The Whole Truth (1958), shot in England with Stewart Granger for Romulus Pictures.

The Donna Reed Show
From 1958 to 1966, Reed starred in The Donna Reed Show, a television series produced by her then-husband, Tony Owen. The show featured her as Donna Stone, the wife of pediatrician Alex Stone (Carl Betz) and mother of Jeff (Paul Petersen) and Mary Stone (Shelley Fabares). Reed was attracted to the idea of being in a comedy, something with which she did not have much experience. She also liked playing a wife.

The show ran for eight seasons on ABC. Reed won a Golden Globe Award and earned four Emmy Award nominations for her work on the series.

Reed described her show as "[...] a realistic picture of small town life with an often humorous twist. Our plots revolve around the most important thing in America—a loving family." In the show, Reed's character, Donna Stone, is a loving mother and wife, but also a strong, smart woman with feelings and a sense of humor.

But some feminists criticized the show, asserting that it promoted submissiveness among housewives. In a 1979 interview, Reed, who had raised four children, responded, "I played a strong woman who could manage her family. That was offensive to a lot of people."

In a 1984 television interview, Reed said of her show, "I felt that I was making, for women, a statement. This mother was not stupid. She wasn't domineering, but she was bright and I thought rather forward-thinking, happily married."

In a 2008 interview, Paul Petersen, who portrayed her son Jeff Stone in the series, also shared his opinions about the production's significance:

That's what the show was really about, the importance of family. That's where life's lessons are transmitted, generation to generation. There's a certain way in which these are transmitted, with love and affection...[The Donna Reed Show] depicts a better time and place. It has a sort of level of intelligence and professionalism that is sadly lacking in current entertainment products. The messages it sent out were positive and uplifting. The folks you saw were likable, the family was fun, the situations were familiar to people. It provided 22-and-a-half-minutes of moral instruction and advice on how to deal with the little dilemmas of life. 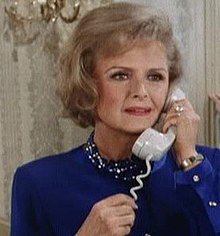 When The Donna Reed Show ended its run in 1966, Reed took time off from acting to concentrate on raising her children and engaging in political activism.

She returned to acting in the late 70s, appearing in the TV movies The Best Place to Be (1979) and Deadly Lessons (1983) and a guest stint on The Love Boat.

In the 1984–85 season of the television series Dallas, Reed replaced Barbara Bel Geddes as Miss Ellie Ewing. Of the show, Reed explained in a 1984 interview,

One of the main reasons Dallas is successful is the family. They all stick together. They may squabble, but they pull for one another and live under one roof, which is really tribal, and it's not true anymore! And I think deep down, everyone misses that.

When Bel Geddes agreed to return to the role for the 1985–86 season, Reed was abruptly fired. Reed failed in attempts to stop the 1985–86 season from going into production while she tried to get reinstated in the role of Miss Ellie. She sued for breach of contract, later settling out of court for over $1 million. 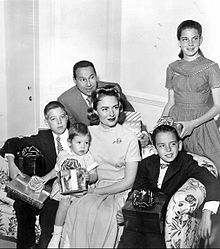 From 1943 to 1945, Reed was married to make-up artist William Tuttle. After they divorced, in 1945 she married producer Tony Owen (1907–1984). They raised four children together: Penny Jane, Anthony, Timothy, and Mary Anne (the two older children were adopted). After 26 years of marriage, Reed and Owen divorced in 1971.

Political views
Reed, who was a registered Republican, was interested in politics. Her interest was piqued during the Vietnam War when she became concerned that her oldest son, Tony, might be drafted. In 1967, Reed became a peace activist and co-chaired the anti-war advocacy group, Another Mother for Peace. The group's slogan was, "War is not healthy for children and other living things." In a 1971 interview with the Los Angeles Times, Reed said,

In the beginning, we felt [Tony] should serve his country in a noncombatant role. But he wouldn't even accept that, feeling the whole thing was immoral. He didn't trust the government or the military. I've learned a lot from Tony.

In addition to opposing the Vietnam War, Reed also opposed nuclear power plants. She supported Democratic Senator Eugene McCarthy from Minnesota in the 1968 presidential election. He was a strong anti-war advocate.

Donna Reed died of pancreatic cancer in Beverly Hills, California, on January 14, 1986, 13 days shy of her 65th birthday. She had been diagnosed with the illness three months earlier and told it was at a terminal stage. Her remains are interred in the Westwood Village Memorial Park Cemetery in Los Angeles.