In 2015, she returned to film in the feature film Ricki and the Flash, with Meryl Streep, Kevin Kline, and Rick Springfield. In November 2015, Rae released her autobiography, The Facts of My Life, which was co-written with her son, Larry Strauss.

Early life
She was born Charlotte Rae Lubotsky on April 22, 1926, in Milwaukee, Wisconsin, to Russian Jewish immigrants Esther (née Ottenstein) and Meyer Lubotsky. Mr. Lubotsky was a retail tire business owner. Rae's mother, Esther Lubotsky, had been childhood friends with Israeli Prime Minister Golda Meir. Rae was the second of three sisters, in between Beverly (1921 – 1998) and Miriam (called "Mimi"; born 1930). For the first ten years of her life, Rae's family lived in an apartment built for them above her father's Milwaukee tire store. In 1936, her parents purchased a home for the family in nearby Shorewood, Wisconsin. She graduated from Shorewood High School in 1944. She did radio work and was with the Wauwatosa Children's Theatre. In 1942, at age 16, she was an apprentice with the Port Players, a professional theater company that came for the summer to Milwaukee, with several established actors such as Morton DaCosta, who would eventually direct The Music Man on Broadway.

Rae attended Northwestern University, although she did not complete her studies. While there, she met friend Cloris Leachman. Many years later, Leachman succeeded Rae on The Facts of Life for the show's last two seasons. At Northwestern she met several then unknown stars and producers, including Agnes Nixon, Charlton Heston, Paul Lynde, Gerald Freedman, Claude Akins and songwriter Sheldon Harnick. In a 2016 interview with Milwaukee Talks, she said about her decision in appearing in only dramatic television: "When I started out, I wanted to be a serious actor, I never thought I'd get into comedy." When a radio personality told her that her last name would not do, she dropped it, to her father's chagrin.

She moved to New York City in 1948, where she performed in the theater and nightclubs. During her early years in New York, she worked at the Village Vanguard (alongside up-and-coming talents such as singer Richard Dyer-Bennet) and at the posh Blue Angel, home to budding talents Barbra Streisand, Mike Nichols and Elaine May. She moved to Los Angeles in 1974.

In 1955 she released her first (and only) solo album, Songs I Taught My Mother, which featured "silly, sinful, and satirical" songs by Sheldon Harnick, Vernon Duke, John La Touche, Cole Porter, Rodgers & Hart and Marc Blitzstein, among others.

She appeared in Ben Bagley's revue The Littlest Revue (and on its cast album) in 1956, appearing alongside Joel Grey and Tammy Grimes, among others, and singing songs by Sheldon Harnick ("The Shape of Things"), Vernon Duke ("Summer is a-Comin' In"), and Charles Strouse and Lee Adams ("Spring Doth Let Her Colours Fly"), a parody of opera singer Helen Traubel's Las Vegas night club act, among others.

Rae later recorded Rodgers & Hart Revisited with Dorothy Loudon, Cy Young, and Arthur Siegel, singing "Everybody Loves You (When You Sleep)" and in several other duets and ensembles for Bagley's studio. Rae received two Tony Award nominations during her Broadway career. The first was in 1966 for Best Featured Actress in a Musical in Pickwick; the second came in 1969 for Best Actress in a Play for Morning, Noon and Night.

In 1973, Rae played the role of Southern Comfort in Terrence McNally's spoof Whiskey at Saint Clements' Theatre Off-Broadway. She appeared in The Vagina Monologues Off-Broadway in 1999.

Television and film
In 1954, Rae made her TV debut on episodes of Look Up and Live and The United States Steel Hour. This led to roles on other similar variety shows such as Armstrong Circle Theatre, Kraft Television Theatre, NBC Television Opera Theatre, The Philco Television Playhouse, The Colgate Comedy Hour, The DuPont Show of the Week, and The Phil Silvers Show.

In 1993, Rae voiced the character "Aunt Pristine Figg" in Tom and Jerry: The Movie. In 2000, she starred as Berthe in the Paper Mill Playhouse production of Pippin. In 2007, she appeared in a cabaret show at the Plush Room in San Francisco for several performances. In the 2008 movie You Don't Mess with the Zohan, Rae had a role as an older woman who has a fling with Adam Sandler's character. On February 18, 2009, she appeared in a small role as Mrs. Ford in the Life episode "I Heart Mom".

Her first significant success was on the sitcom Car 54, Where Are You? (1961–1963), in which she played Sylvia Schnauzer, the wife of Officer Leo Schnauzer (played by Al Lewis). This was followed by roles in 'Way Out, The Defenders, Temperatures Rising, The Love Boat, The Partridge Family, Love, American Style, McMillan & Wife, Barney Miller, 227, Murder, She Wrote, St. Elsewhere, Diagnosis: Murder, All in the Family, and Good Times. She was nominated for an Emmy Award for her supporting role in the 1975 drama Queen of the Stardust Ballroom. In January 1975, Rae became a cast member on Norman Lear's ABC television comedy Hot l Baltimore, wherein she played Mrs. Bellotti, whose dysfunctional adult son Moose, who was never actually seen, lived at the "hot l" (the "E" on the hotel's neon sign was burnt out). Mrs. Bellotti, who was a bit odd herself, would visit Moose and then laugh about all the odd situations that Moose would get into with the others living at the hotel. Rae also appeared in an early season of Sesame Street as Molly the Mail Lady.

Diff'rent Strokes and The Facts of Life
In 1978, NBC was losing to both CBS and ABC in sitcom ratings, and Fred Silverman, future producer and former head of CBS, ABC, and NBC, insisted that Norman Lear produce Diff'rent Strokes. Knowing that Rae was one of Lear's favorite actresses (in addition to Hot l Baltimore, she also appeared in a 1974 episode of All in the Family) he hired her immediately for the role of housekeeper Edna Garrett, and she co-starred with Conrad Bain in all 24 episodes of the first season. In "The Girls' School" episode, Mrs. Garrett is asked to help out at Kimberly Drummond's (actress Dana Plato) private school for girls called East Lake (later changed to Eastland). At the end of the episode, Mrs. Garrett decides to return to her housekeeping job at the Drummond residence.

In July 1979, Rae proposed the idea for a spinoff based on "The Girls' School" episode. NBC approved the show, to be called The Facts of Life, which would portray a housekeeper turned housemother for boarding students in a prestigious private school. The program would deal with issues facing teenagers such as weight gain and dieting, depression, drugs, alcohol, and dating. Rae had a stipulation written into her contract that said she may return to Diff'rent Strokes if the new spinoff was not successful.

After working as a character actress/comedian in supporting roles or in guest shots on television series and specials, The Facts of Life gave Rae not only her best-known role but it finally made her a television star. The role of Edna Garrett was the unifying center of attention of the program as well as a warm, motherly figure for the girls.

The Facts of Life had marginal ratings at first, but after a major restructuring and time change for the second season, the show became a ratings winner between 1980 and 1986. Midway throughout both the 1984–85 and 1985-86 seasons, Rae missed several episodes because she requested her appearances be reduced. She felt the girls' characters were maturing and not requiring as much of Mrs. Garrett's rearing and advice. Rae began to contemplate leaving the series, as she felt her time on the show had run its course. She left at the beginning of the eighth season, and Cloris Leachman was then brought in as Mrs. Garrett's sister, Beverly Ann Stickle, for the show's last two years. The part of Beverly was quite similar to Leachman's character of Phyllis Lindstrom on The Mary Tyler Moore Show and Phyllis from the 1970s. Unfortunately, the character of Beverly was not as popular with viewers as Mrs. Garrett had been. Nevertheless, Leachman remained with the show until it was canceled in 1988.

In 2001, Rae, Lisa Whelchel, Mindy Cohn, and Kim Fields were reunited in a TV movie, The Facts of Life Reunion. In 2007, the entire cast was invited to attend the TV Land Awards where several members of the cast, including Rae, sang the show's theme song.

In a 2015 interview with Entertainment Tonight Rae said that The Facts of Life series had an off-stage scale to weigh the girls, but that the pressure had the opposite effect producers were hoping for; "The more they tried to pressure them and weigh them and threaten them, the more they would eat. It's not the way you handle adolescence. You don't do that."

On April 19, 2011, the entire cast was reunited again to attend the TV Land Awards, where the show was nominated and won the award for Pop Culture Icon. The same day, Nancy McKeon and Kim Fields (who played Jo and Tootie, respectively) also gave a speech in honor of her 85th birthday. The cast did likewise on ABC's Good Morning America, where at the end of the segment, reporter Cynthia McFadden wished Rae a happy birthday, and the cast sang the show's theme song. 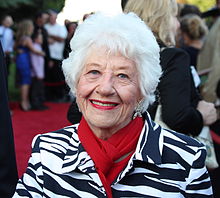 Rae married composer John Strauss on November 4, 1951. In the mid 1970s, he came out as bisexual, and the couple divorced in 1976. Strauss died in 2011 at age 90 following a long battle with Parkinson's disease. Rae had two sons with Strauss; Lawrence, a high school teacher, and his older brother Andrew (called "Andy"; 1955 – 1999). Andy was autistic and suffered from epilepsy as well.

Rae joined Alcoholics Anonymous in the early 1970s. The organization became an important part of her personal life.

Health issues and death
In 1982, Rae had a pacemaker implanted. With periodic alterations, the same pacemaker worked over 30 years, but it stopped abruptly several years before Rae's death. Her heart rate was around 35 beats per minute prior to entering emergency surgery to install a new pacemaker. The old pacemaker was left in place on the left side of her chest and the new, smaller pacemaker was placed on the right side. It functioned well until her death. In addition to pacemaker replacement, Rae had open heart surgery to replace her mitral valve with a mechanical equivalent. Her left carotid artery was cleared of blockage as well.

In 2009, due to the frequency of pancreatic cancer in her own family, Rae was screened, diagnosed early, and became cancer-free after six months of chemotherapy. Her mother, an uncle, and her elder sister Beverly all reportedly died from pancreatic cancer. In 2017, aged 91, she was, however, diagnosed with bone cancer.