Lily Rabe (born June 29, 1982) is an American actress. She received a nomination for the Tony Award for Best Actress in a Play for her performance as Portia in The Merchant of Venice. Rabe is best known for her multiple roles on the FX anthology series American Horror Story, and her lead role as Claire Bennigan on the ABC science fiction series The Whispers.

Early life
Rabe was born in New York City on the Upper West Side, the daughter of playwright David Rabe and actress Jill Clayburgh (1944–2010). She has a younger brother, Michael, an actor and playwright, and an older paternal half-brother, Jason, a musician. Her father is Catholic, her maternal grandfather was Jewish, and her maternal grandmother was Protestant. Rabe was raised in Bedford, and moved to Lakeville, Connecticut when she was in the seventh grade. There, she attended the Hotchkiss School.

Rabe studied dance for ten years. She was teaching ballet at a summer arts program in Connecticut, when she was approached by the program's acting instructor, who asked her to perform a monologue in the final production. Rabe performed a monologue from the play Crimes of the Heart by Beth Henley. She stated, "It was that moment, performing that monologue, that made me think, 'Maybe this is what I wanna do'." Rabe then went on to study acting at Northwestern University, from which she graduated in 2004.

Career
Early years
In 2001, Rabe made her screen debut opposite her mother Jill Clayburgh in the film Never Again. In 2002, Rabe made her professional stage debut, again opposite her mother, at the Gloucester Stage Company in Massachusetts. She starred in two one-act plays: Speaking Well of the Dead by Israel Horovitz, and The Crazy Girl by Frank Pugliese. As a result of appearing in the plays, Rabe was able to get an Equity Card. In July 2003, Rabe returned to the Gloucester Stage Company to appear in a production of Proof by David Auburn. The same year, she appeared in the film Mona Lisa Smile. After graduating, Rabe moved back to New York. From September 29 through October 2, 2004, she appeared in White Jesus by Deirdre O'Connor, one of a series of one-act plays presented as The Democracy Project from the Naked Angels Theater Company.

On January 21, 2005, she took part in a workshop production of The Best Little Whorehouse in Texas at the Roundabout Theatre Company, which was directed by Joe Mantello. She made her Broadway debut as Annelle Dupuy-Desoto in the 2005 revival of Steel Magnolias by Robert Harling, directed by Jason Moore. For her performance, Rabe was nominated for a Drama Desk Award. Rabe had been cast in the play Sisters of the Garden but had to drop out after being cast in Steel Magnolias. From September through to October 2005, she appeared in the American premiere of Colder Than Here by the English playwright Laura Wade at the MCC Theater. Jeremy McCarter in New York Magazine listed Rabe's performance as one of the best breakthroughs of 2005. From September to December 2006, Rabe played Ellie Dunn in Roundabout Theatre Company's production of Heartbreak House by George Bernard Shaw. In 2007, she appeared in the film No Reservations. In August 2007, she appeared in Crimes of the Heart at the Williamstown Theatre Festival in a production which marked the directorial debut of actress Kathleen Turner.

In 2008, the production transferred to Off-Broadway, presented by the Roundabout Theatre Company and staged at the Laura Pels Theatre, running from February 14 to April 13. During a rehearsal, a piece of the set fell on Rabe, leaving her with a fractured rib. Due to the injury, Rabe missed a week of preview performances and the opening night was moved back a week, from February 7 to February 14. In August 2008, Rabe was cast in the HBO pilot Last of the Ninth, a drama set in the 1970s. Rabe played a plainclothes cop in the pilot, which was written by David Milch and directed by Carl Franklin. In December 2008, it was reported that HBO had decided not to pick the pilot to series. The same year, she appeared in the films What Just Happened and The Toe Tactic, as well as two episodes of Medium. From January to March 2009, Rabe appeared in the Broadway premiere of Richard Greenberg's 1990 play The American Plan at the Samuel J. Friedman Theatre. In 2010, Rabe made her debut appearance at Shakespeare in the Park in a production of The Merchant of Venice, directed by Daniel J. Sullivan, that ran from June 30 to August 1. Rabe was cast as Portia, which she described as "one of the great female roles." Rabe also co-starred in the 2010 film All Good Things. 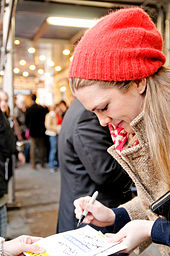 Rabe next starred in The Merchant of Venice, opposite Al Pacino as Shylock, in a performance described as a "smashing break-out". The production transferred to Broadway at the Broadhurst Theater, where it ran from October 19 to February 20, 2011. For her performance, Rabe was nominated for the Tony Award for Best Actress in a Play. In March 2011, Rabe was cast in the FOX drama pilot Exit Strategy in a role that would be recurring if the pilot was picked up. In July, it was confirmed that FOX had passed on the pilot. Rabe appeared again at the Williamstown Theatre Festival in a production of A Doll's House by Henrik Ibsen, where she played the role of Nora Helmer.

In August 2011, Rabe was given her first regular role on a television series when she was cast as Nora Montgomery on the FX horror series American Horror Story. She was later cast in the second season as the nun Sister Mary Eunice McKee (a role she later reprised in the fourth season). For the second season, Rabe was nominated for a Critics' Choice Television Award for Best Supporting Actress in a Movie/Miniseries. She also was cast in the third season, as a resurgent witch named Misty Day; the role was written for her by co-creator Ryan Murphy. In the fifth season, she was a special guest star in the "Devil's Night" episode playing Aileen Wuornos. In the sixth season she had a main role as Shelby Miller. Rabe is one of only three actors to appear in the first six seasons of the show.

Rabe appeared at the Golden Theatre in the Broadway play Seminar by Theresa Rebeck. It was directed by Sam Gold, and the cast included Alan Rickman, Jerry O'Connell, Hamish Linklater, and Hettienne Park. It opened on November 20, 2011, and closed May 6, 2012. In May 2012, it was announced that Rabe would play actress Mary Pickford in The First, a film based on the book Pickford: The Woman Who Made Hollywood by Eileen Whitfield. She finished work in the Public Theater's production of As You Like It, part of the 50th Season of Shakespeare in the Park at the Delacorte Theatre. She played the role of Rosalind in the production that opened on June 11, 2012 and closed on June 30, 2012. In October 2012, it was announced that Rabe would appear in We're Just Married, a film written by her father and directed by Rodrigo Garcia. Rabe will also be a producer of the film. In May 2013, Rabe made her Los Angeles stage debut in a production of Miss Julie by August Strindberg that was adapted and directed by Neil LaBute. In September 2013, Rabe was announced to have been cast as Commander Lyme in The Hunger Games: Mockingjay – Part 1 and The Hunger Games: Mockingjay – Part 2, the final two installments of The Hunger Games film series, based on the novels by Suzanne Collins. She was later replaced in the films by Gwendoline Christie due to a scheduling conflict.

On February 14, it was announced that Rabe would appear in Much Ado About Nothing as part of the 2014 Shakespeare in the Park season. The production began on June 3 and ran to July 6. In 2014, Rabe appeared in Pawn Sacrifice, a film biopic about chess player Bobby Fischer, playing Fischer's sister Joan Targ. On February 24, it was announced that Rabe will appear with Thomas Jane and Jessica Alba in horror film The Veil. The film was later released on January 19, 2016, through video on demand prior to being released through home media formats on February 2, 2016. The same day, it was also announced that Rabe was to star in The Visitors, a drama pilot for ABC. The pilot was later changed to The Whispers and was officially picked up by ABC in May 2014. The series premiered on June 1, 2015, and was subsequently cancelled on October 19, 2015 after the completion of its first season. In May 2016, it was revealed that Rabe had been cast in Golden Exits directed by Alex Ross Perry.

Personal life
In December 2016, it was reported that Rabe was expecting her first child with longtime boyfriend, Hamish Linklater. Rabe gave birth to a girl in March 2017.