Early life
Park was born in South Korea and raised in San Jose, California. She participated in a number of theatrical productions in her teens at Notre Dame High School and Bellarmine College Preparatory.

In 2000, Park received a Bachelor of Fine Arts degree from Boston University. During her college career, she spent a semester in England, studying at the London Academy of Music and Dramatic Art and the Royal Academy of Dramatic Art. Her college stage credits included Mad Forest, Lysistrata, Cyrano de Bergerac, Richard III, and The Trojan Women, among others. 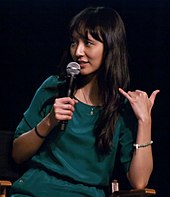 In 2001, Park had a small role in the feature film Jurassic Park III (2001) as Ellie Satler's assistant.

Also in 2001, less than a year after graduation, Park was cast in the role of Hoshi Sato in the fifth incarnation of the Star Trek franchise, Star Trek: Enterprise, which premiered in September 2001. Sato was the ship's communications officer, with a natural gift for translating alien languages. Park herself is fluent in both English and Korean, and she also speaks some French.

In October 2003, Park starred in UA's world premiere of the Mary Fengar Gail’s play Fuchsia. From October 19 to November 11, 2005, she played Clytemnestra in a New York City production of Agamemnon. In 2011, Park played the role of Anne Deever in a production of Arthur Miller's All My Sons at the Matrix Theater in Los Angeles. She is also the co-founder of the theater company Underground Asylum.

In 2009, Park became a series regular in the second season of Crash, playing the role of Maggie Cheon on the Starz Network; she co-starred in thirteen episodes. The show was subsequently cancelled after the death of Dennis Hopper.

Park is an active student of dance, remarking that "dancing has always been my second love". She has continued to study and practice ballet, among other dance forms.