On March 12, 2019, Loughlin and her husband were arrested in connection with an alleged nationwide college entrance exam cheating scandal, charged with conspiracy to commit mail fraud and honest services mail fraud, and released on bail. On April 15, they pleaded not guilty.

Early life and education
Loughlin was born in Queens, New York City and moved to Hauppauge, New York on Long Island when she was a year old. She is the daughter of Lorellee and Joseph Roy Loughlin, a foreman for the New York Telephone Company. She has one younger brother, Roy.

Loughlin attended Oaks School #3 Elementary School in Oceanside. She would go on to graduate from Hauppauge High School. Loughlin is of Irish descent.

After becoming interested in acting as a young child, Loughlin began her career at age 11 as a print model, recalling:

My mom had a friend that was going into Manhattan to meet with an agency for modeling. She was taking her teenage daughters in and she asked my mom if I wanted to go along. My mom reluctantly let me go, but I don't think she ever thought anything would come of it. And I went in and they handed me a contract and said, "We'll take you." 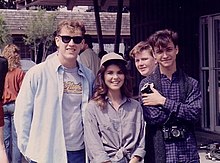 At 15, she was cast in the ABC soap opera The Edge of Night, playing the part of Jody Travis, an aspiring dancer, appearing in the series from 1980 to 1983. From 1983 to 1988, Loughlin appeared in a number of feature films and television guest spots.

From 1988 to 1995, Loughlin was cast as Rebecca Donaldson, Danny Tanner's (Bob Saget) co-host and later Jesse Katsopolis' (John Stamos) wife in the ABC sitcom Full House. Initially set for a six-episode arc, she became a regular for the remainder of the series. Within months after Full House ended, Loughlin co-starred with Tony Danza in the ABC sitcom Hudson Street (1995–96). The series was cancelled after one season.

In 1993, she starred in the television adaptation of Sidney Sheldon's novel A Stranger in the Mirror, which is a roman à clef on Groucho Marx and Erin Fleming, with Loughlin playing Fleming's role. In 1997, she starred alongside Bruce Campbell in the film In the Line of Duty: Blaze of Glory. In 2000, Loughlin co-starred opposite Treat Williams in the Fred Olen Ray-directed thriller film Critical Mass. She also guest starred in Suddenly Susan, Spin City, Seinfeld, The Drew Carey Show, and as the superhero Black Canary in the Birds of Prey series in 2002.

From 2004 to 2005, Loughlin co-created, produced and starred in The WB drama series Summerland. She played Ava, the aunt who raises three children after their parents die in a car accident. The series was canceled after two seasons due to low ratings on July 11, 2005. In 2007, Loughlin co-starred in the ABC sitcom In Case of Emergency with David Arquette. She appeared in the film Moondance Alexander (2007), co-starring with her former Summerland castmate Kay Panabaker. Loughlin also was in attendance at Comedy Central's The Roast of Bob Saget which was hosted by John Stamos and premiered on August 17, 2008. At her table were Full House co-stars Dave Coulier and Jodie Sweetin. In 2010, Loughlin starred in the television film Meet My Mom, which premiered on the Hallmark Channel on Mother's Day. For the network, she most notably starred in the drama When Calls the Heart and the telefilm series Garage Sale Mystery until her firing in 2019. On April 10, 2019 it was reported that When Calls The Heart would be returning after a production hiatus without Loughlin's character.

Loughlin made a brief appearance as Rebecca Donaldson, alongside John Stamos as Jesse Katsopolis, on a July 2013 episode of Late Night with Jimmy Fallon, following a reunion performance by Jesse and The Rippers. She has since made several appearances as Rebecca on the Full House sequel series Fuller House, which premiered its first season on Netflix on February 26, 2016.

Personal life
Loughlin is Catholic. She was married to investment banker Michael R. Burns from 1989 to 1996. On Thanksgiving 1997, Loughlin eloped with fashion designer Mossimo Giannulli, the creator of the Mossimo clothing line, whom she had met in 1995. They have two daughters together, Isabella Rose and Olivia Jade, and Loughlin is a stepmother to Gianni, Giannulli's son from a previous relationship. Olivia has a YouTube channel of beauty tips and a popular Instagram account; both with over 1 million subscribers/followers. In 2014, Loughlin and Giannulli put their Aspen, Colorado home on sale for $8.9 million. The home sold in July 2015 for $7.6 million. In 2017, Loughlin and Giannulli put their Los Angeles mansion on the market for $35 million.

2019 college admissions bribery scandal
Loughlin and her husband were among 50 individuals charged by the FBI and U.S. Attorney's Office on March 12, 2019, in a large-scale nationwide college entrance exam cheating scandal. The indictment against the couple alleged that they had paid $500,000, disguised as a donation to the Key Worldwide Foundation, in order that the University of Southern California's (USC's) admissions committee would be led to believe that their two daughters would be joining the school's women's rowing team if admitted, when in fact neither young woman had ever trained in the sport and had no plans to do so.

On March 13, 2019, Loughlin and her husband Giannulli surrendered to federal authorities in Los Angeles. In their subsequent appearances at United States District Court in Los Angeles, Loughlin and Giannulli were each released on a bail bond of $1 million and were permitted to retain their passports and travel outside of the United States as long as they informed the court. At her court appearance in Boston on April 3, she acknowledged her rights, charges, and maximum possible penalties; she waived a pretrial hearing, signed conditions of her release, and was free to leave.

As a result, the Hallmark Channel severed ties with Loughlin on March 14, 2019 with her scenes from season six of When Calls the Heart being edited out. On March 16, Netflix dropped her from Fuller House and technology firm Hewlett-Packard announced it would remove her and her daughter Olivia Jade Giannulli from its advertising. Loughlin's daughters were able to remain enrolled at USC, but Olivia Jade Giannulli, a social media influencer on YouTube and Instagram, lost a partnership with cosmetics firm Sephora, as well as sponsorships for her beauty channel and Instagram posts.

Loughlin and her husband were named as defendants in a private class-action lawsuit brought on by Stanford University graduates, who allege their education and their degrees have been devalued due to their school's association with the case.

Loughlin and Giannulli later rejected a plea deal, including for the additional charge of money laundering, that required both to spend two years in prison, and on April 15 pleaded not guilty.

Loughlin regretted not taking the plea deal and was angered at Giannulli for suggesting that they reject the plea deal as he feared that it would ruin their careers.