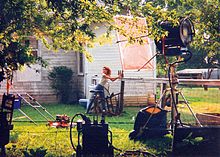 In the early 90's Leighton's first on-screen jobs were in a commercial for Pizza Hut and Dep Hair Gel before taking her first major acting role as Sydney Andrews in the prime time soap opera Melrose Place. The part was originally intended for only two episodes in season 1, but was eventually developed into a full-time role for the subsequent seasons 2 to 5 (1993–97).

Her character of Sydney Andrews is considered one of the most beloved characters of Melrose Place and during the show's popularity, Leighton appeared on numerous magazine covers (including Entertainment Weekly and Rolling Stone and People).

Leighton eventually chose to leave the show at the end of the fifth season in 1997, which saw her character Sydney getting struck and seemingly killed by a car, only moments after her wedding to Craig Field played by David Charvet.

During breaks while filming Melrose Place, Leighton starred in the made-for-television films, In the Name of Love: A Texas Tragedy for FOX as Laurette Wilder, a woman from the wrong side of the tracks who falls for a rich boy, much to the disgust of his grandparents and The Other Woman for CBS as Carolyn Bryan, a newly married model who finds herself making friends with her husbands dying ex-wife. She also hosted an episode of Saturday Night Live in 1995 with musical guest Rancid.

After leaving Melrose Place in 1997 at the end of her contract, Leighton accepted a six episode role on Beverly Hills, 90210. Aaron Spelling created the role of wannabe actress Sophie Burns for her, and she reportedly received a six-figure salary per episode. In 1999, she appeared in the independent short film Angels, Baby! directed by Jeff Fisher along with the Paul Lazarus directed romantic comedy Seven Girlfriends opposite Tim Daly and the thriller The Clean and Narrow opposite Jack Noseworthy which was released direct to video in early 2000.

In the 2000s, Leighton guest-starred in the shows Cupid and The Outer Limits, and lent her voice to the cult favorite animated series Duckman. She later starred in the indie film The Sky Is Falling with Dedee Pfieffer and Eric Close before taking a long break to have her son Jack Douglas. In 2003, she returned to the small screen in the much-hyped, but little-watched SKIN for FOX, which lasted three episodes before being removed from the schedule, and in the short-lived 2005 ABC series Eyes.

In 2006–07, she made numerous prime-time guest appearances, on shows such as the ABC drama/comedy Boston Legal, Law & Order: Special Victims Unit, CSI: Miami, and Shark. In 2004, she starred in the Lifetime movies A Deadly Encounter as Joanne Sanders, a single mother who is the victim of a stalker and Love Notes, as Nora Flannery, a classic music critic who, while on a job, finds love with a popular country and western singer. Leighton also appeared in the western/horror/thriller The Burrowers directed by J.T Petty and the Hallmark Channel movies Daniel's Daughter opposite Sebastian Spence and Mending Fences, opposite Angie Dickinson.

On April 5, 2009, The Hollywood Reporter announced that Leighton would appear in the 2009 series Melrose Place, reprising her role as the presumed-dead Sydney, who will serve as landlord at Melrose Place. The remake only lasted a single season on the CW before being cancelled. On December 7, 2009, ABC Family announced that Leighton had been cast in a lead role in the TV series Pretty Little Liars, a TV adaptation of a book of the same name by Sara Shepard as Ashley Marin, the mother of Hanna Marin played by Ashley Benson, one of the four main characters on the show. Leighton stayed with Pretty Little Liars for all seven seasons until the show's end in June 2017.

Accolades
Following her performance in the second season of Melrose Place, Leighton was featured on the cover of Entertainment Weekly's 1994 Fall TV Preview issue. She appeared on the cover of Rolling Stone with her co-stars Heather Locklear and Josie Bissett in May 1994, in an issue entitled "The Hot Issue". In 1995, she was nominated for a Golden Globe Award for her work on the series. was named one of the most beautiful people in the world by People magazine, and hosted an episode of Saturday Night Live. The role of Sydney Andrews, which she signed on to reprise in the 2009 Melrose Place spin-off, has been recognized by The Hollywood Reporter as "one of the most popular characters" from the original series.

Personal life
Leighton was born Laurie Miller in Iowa City, Iowa, and is a 1986 graduate of West High School in Iowa City. During her time at West High, Leighton was a cheerleader and a member of the school's show choir "The Good Time Company" and performed numerous solos during her time with the group. Leighton then joined the all singing, all dancing troupe The Young Americans and was a member of their 1987 "Around the World" tour which saw the group travel to countries including Japan and Australia.
In 1988, Leighton assumed her maternal grandfather's surname.

In May 1998, Leighton married her Melrose Place co-star Doug Savant. They have two children together: Jack and Lucy.