Jane Elizabeth Leeves (born 18 April 1961) is an English actress, model, producer, comedian, singer, and dancer. She played Daphne Moon on the television sitcom Frasier from 1993 until 2004, for which she was nominated for Emmy Awards and Golden Globe Awards. She is also known for her role as Joy Scroggs on TV Land's sitcom Hot in Cleveland.

Leeves made her screen debut with a small role in 1983 on the British comedy television show The Benny Hill Show, and appeared as a dancer in Monty Python's The Meaning of Life. She moved to the United States, where she performed in small roles. From 1986 to 1988, she had her first leading role in the short-lived sitcom Throb, and then secured a recurring part in the television sitcom Murphy Brown. She received further recognition for roles in films such as Miracle on 34th Street (1994), James and the Giant Peach (1996), Music of the Heart (1999), and The Event (2003). 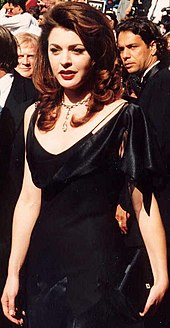 Leeves was a regular on The Benny Hill Show (as one of "Hill's Angels"), later making use of her experience as a dancer in a scene in Monty Python's The Meaning of Life and appeared as a tourist with a baby in the David Lee Roth music video for the song "California Girls", but struggled for several years to establish herself. She became somewhat visible as the flighty record company employee, Blue (née Prudence Anne Bartlett), on the syndicated sitcom Throb.

She had a recurring role in the television series Murphy Brown which provided her first period of success, playing Audrey, the smart but awkward girlfriend of producer Miles Silverberg (played by Grant Shaud). Leeves also appeared as the troublesome Marla the Virgin in four risqué episodes of Seinfeld: "The Virgin", "The Contest", "The Pilot", and "The Finale – Part 2". During this period, Leeves was cast as Holly for the pilot of the US version of the science-fiction comedy Red Dwarf. She also had a role as a lesbian avant-garde dancer in the 1985 film To Live and Die in L.A.

In 1993, Leeves joined the cast of the television series Frasier. She played the eccentric, forthright, and allegedly psychic Mancunian Daphne Moon. By the start of the eighth season, Leeves was pregnant, and the writers incorporated her pregnancy into shows as weight gain due to her character's stress from her relationship with Niles (portrayed by David Hyde Pierce). By the conclusion of Frasier, Leeves had received a Primetime Emmy Award for Outstanding Supporting Actress in a Comedy Series nomination in 1998 and also a Golden Globe Award for Best Supporting Actress – Series, Miniseries or Television Film nomination in 1995 for her role and had become the highest-paid British actress in Hollywood.

Appearing less frequently in cinema, Leeves lent her speaking voice and singing voice to the animated film James and the Giant Peach (1996) as Mrs. Ladybug and acted in the film Music of the Heart (1999). In 2002, she appeared in the Broadway musical Cabaret. In 2004, she hosted an episode of the television comedy quiz show Have I Got News for You. Her 2006 show, The WB's sitcom Misconceptions, went unaired. 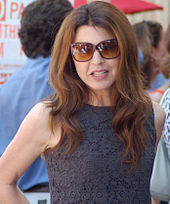 Leeves provided guest vocals in The Penguins of Madagascar as Lulu, a female chimp, with which Phil fell in love. With Peri Gilpin, Leeves also set up the production company Bristol Cities (cockney rhyming slang for 'titties'). Their last project was in 2007, a pilot for a US remake of the British sitcom The Vicar of Dibley, with Kirstie Alley in the title role.

In 2010, Leeves was a guest star in two episodes in ABC's Desperate Housewives as Lynette and Tom's therapist, Dr. Graham. From 2010 until 2015, she played the 40-something ex 'eyebrow artist to the stars' Joy Scroggs in the TV Land comedy, Hot in Cleveland, with Valerie Bertinelli, Wendie Malick (also her co-star in the final season of Frasier), and Betty White. In 2011, she was nominated Screen Actors Guild Award for Outstanding Performance by an Ensemble in a Comedy Series along with the rest of the cast.

Personal life
Leeves has been married to Marshall Coben, a CBS Paramount Television executive, since 21 December 1996. They have two children. Her pregnancy with her first child was written into a Frasier plot as a weight-gaining problem for her character. Frasier co-star Peri Gilpin was in the delivery room when the child was born and is her godmother. Leeves is godmother of Gilpin's daughter and lives next door to Gilpin in Los Angeles, California. Leeves' son has David Hyde Pierce and the late John Mahoney as godfathers.

In January 2012, Leeves posed in an ad for the NOH8 Campaign, which supports the LGBT community.

Categories: 1961 births,20th-century English actresses,21st-century English actresses,Actresses from Essex,English expatriates in the United States,English film actresses,English stage actresses,English television actresses,LGBT rights activists from England,People from Ilford
Michele Lee Wiki Chyler Leigh Wiki
Disclaimer: The above information is for general informational purposes only. All information on the Site is provided in good faith, however we make no representation or warranty of any kind, express or implied, regarding the accuracy, adequacy, validity, reliability, availability or completeness of any information on the Site.