Karen Lucille Hale (born June 14, 1989) is an American actress and singer. Early in her career, she was sometimes referred to as Lucy Kate Hale. She is best known for her role as Aria Montgomery on the Freeform series Pretty Little Liars (2010–2017). Some other notable roles in television played by Hale include Becca Sommers in Bionic Woman (2007), Rose Baker in Privileged (2008–2009) and Stella Abbott in Life Sentence (2018). Hale has appeared in films, The Sisterhood of the Traveling Pants 2 (2008), Sorority Wars (2009), A Cinderella Story: Once Upon a Song and Scream 4 (both 2011) and Truth or Dare and Dude (both 2018). Hale is set to portray the title character Katy Keene in an upcoming The CW series Katy Keene (2020).

In addition to acting, Hale has also ventured into music. In 2003, she first came to prominence as one of the five winners of the reality show American Juniors, a children's spin-off of Fox's American Idol and began as a solo artist with signing Hollywood Records in 2012, on her debut studio album, Road Between (2014).

Early life
Hale was born in Memphis, Tennessee, to Julie Knight and Preston Hale. She was named after one of her great-grandmothers. Her mother is a registered nurse. She has an older sister, Maggie, a step-sister, Kirby, and a step-brother Wes. Hale was homeschooled as a child. During her childhood, she took acting and singing lessons.

Career
American Juniors
In 2003, Hale first appeared on television as a contestant in the Fox reality show American Juniors. On July 30, 2003, Hale finished in fourth place and part of a group of the same name formed with the top 5 finishers (Chauncey Matthews, Danielle White and Tori & Taylor Thompson) but the group disbanded in 2005, after their self-titled studio album's lackluster sales.

Acting
Hale moved to Los Angeles at age 15 in the hopes of getting a record deal. Shortly after, she started auditioning and received a minor role on Drake & Josh and other guest roles on shows such as Ned's Declassified School Survival Guide, The O.C., Private Practice and Ruby & the Rockits. She appeared in two episodes on both television shows Wizards of Waverly Place as Miranda Hampson and How I Met Your Mother as Katie Scherbatsky.

In 2007, Hale appeared in NBC's short-lived series Bionic Woman, a re-imagining from the 1976 series of the same name. Hale plays Becca Sommers, the younger sister of the title character Jaime Sommers (played by Michelle Ryan). The character was originally portrayed by Mae Whitman in the unaired pilot episode, after which Whitman departed the series. 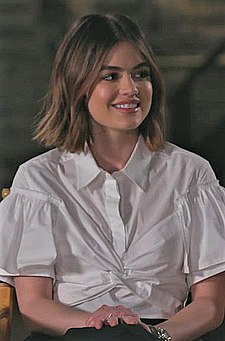 In August 2008, Hale made her big screen debut in The Sisterhood of the Traveling Pants 2 portraying Effie Kaligaris, the younger sister of Lena Kaligaris (played by Alexis Bledel). One month later, Hale starred in The CW series Privileged as Rose Baker, with co-stars JoAnna Garcia and Ashley Newbrough. The series is based on the book How to Teach Filthy Rich Girls by Zoey Dean and was cancelled by the network due to low ratings. Hale had auditioned for the two characters in the first two The Twilight Saga films, both were lost to Ashley Greene as Alice Cullen in Twilight and Dakota Fanning as Jane Volturi in The Twilight Saga: New Moon. In 2009, Hale appeared in two films, the comedy-drama Sorority Wars and the mystery-thriller Fear Island. In October 2009, Hale was cast as Aria Montgomery in Pretty Little Liars, based on the book series of the same name by Sara Shepard. The television series lasted seven seasons from 2010 to 2017, with Hale's performance being praised by critics. She also received a number of awards and nominations.

In January 2010, Hale appeared as the singer Phoebe Nichols and her identical body double Vanessa Patton in the CSI: Miami episode "Show Stopper". In 2011, Hale had a cameo role as Sherrie in the slasher film Scream 4. Later, Hale was cast as the aspiring singer Katie Gibbs in A Cinderella Story: Once Upon a Song, the third installment of A Cinderella Story series and was released on direct to video in September 2011.

Hale hosted an episode of MTV's Punk'd aired on April 26, 2012, where she successfully pranked with Pretty Little Liars co-star Ian Harding, Vanessa Hudgens and Josh Hutcherson. The same year, Hale played the voice of Periwinkle, a twin sister of Tinker Bell (voiced by Mae Whitman) in the animated Disney film Secret of the Wings.

Hale was co-hosted for the television event shows, the Teen Choice Awards (with Darren Criss in 2013 and David Dobrik in 2019) and the 2014 MTV Video Music Awards Pre-Show with Sway Calloway. Hale served as a correspondent in New Orleans for the Dick Clark's New Year's Rockin' Eve with Ryan Seacrest (2016–present).

In 2018, Hale was cast in The CW comedy-drama series Life Sentence as Stella Abbott, a woman who finds out that her terminal cancer is cured. The series which only lasted one season. The same year, Hale starred in three films, Truth or Dare, Dude and The Unicorn. On March 11, 2019, Hale was cast as the title character in the Riverdale spin-off series Katy Keene. On May 16, 2019, Hale will co-star with Robbie Amell in the romantic comedy adaptation The Hating Game, based on the novel by Sally Thorne.

Music
Hale described music as her "first love". Her early musical influences were Shania Twain and Faith Hill, but what ignited her interest in pursuing music was Britney Spears' "...Baby One More Time". Kristian Bush of country band Sugarland said: "She sounds like Carrie Underwood—strong with a blues side and a pop side to it. And a lot like Faith Hill." She recorded songs for A Cinderella Story: Once Upon a Song soundtrack. Throughout her career, Hale made appearances of music videos with artists: Foy Vance's "She Burns", Chase Jordan's "Lose Control (Take a Sip)" and Jackson Harris' "Come Back Down to Earth". She also served as a backup singer for artist Carly Pearce.

On June 12, 2012, Hale announced that she had signed a record deal with Hollywood Records (co-partnership with DMG Nashville). On February 18, 2014, Hale's debut studio album was announced to be called Road Between, released on June 3, 2014. The album includes two singles "You Sound Good to Me" and "Lie a Little Better". In 2015, Hale collaborated with Rascal Flatts, performed a cover of "Let It Go" originally by Idina Menzel from another Disney animated film Frozen and was featured on the compilation album We Love Disney. Later, Hale recorded two songs "Mistletoe" and "You're Here" on the Christmas album A Hollywood Christmas, released on December 8, 2017.