Patricia Wettig (born December 4, 1951) is an American actress and playwright. She is best known for her role as Nancy Weston in the television series Thirtysomething (1987–1991), for which she received a Golden Globe Award and three Primetime Emmy Awards.

Early life
Wettig was born in Milford, Ohio, to Florence (née Morlock) and Clifford Neal Wettig, a high school basketball coach. She has three sisters: Pam, Phyllis, and Peggy. She was raised in Grove City, Pennsylvania and graduated in 1970. She attended Ohio Wesleyan University and graduated from Temple University in 1975. She returned to her studies later in life and received a Master of Fine Arts in playwriting from Smith College in 2001. F2M, a play she authored, was performed in 2011 as part of the New York Stage and Film and Vassar College's 2011 Powerhouse Theater season.

Career
Although Wettig has acted in a number of films (including City Slickers, Guilty by Suspicion, and The Langoliers), she is best known for her work on television. She received critical acclaim (and a number of awards) for her role as Nancy Weston on ABC's thirtysomething. Her portrayal of Nancy's cancer struggle attracted considerable acclaim and attention. She also portrayed Joanne McFadden on the television program St. Elsewhere. In addition, Wettig appeared in a number of popular television programs during the 1980s and 1990s including L.A. Law, Frasier, Hill Street Blues, and Remington Steele.

Wettig starred in the ABC comedy-drama series Brothers & Sisters, which debuted in September 2006, where she portrays the Walker family patriarch's mistress, Holly Harper. Her character was the co-CEO at Ojai Foods with Sarah Walker, the daughter of William Walker. She left the show mid-season during Season 5 after her character Holly Harper followed her daughter to New York along with her fiance David played by real life husband Ken Olin. This season sees the whole Harper family absent from the show. Wettig also had the recurring role of CIA psychotherapist Dr. Judy Barnett on Alias (husband Olin was a producer and director on the series). Before joining Brothers & Sisters, she played the fictional Vice President Caroline Reynolds on the 2005 Fox television drama, Prison Break. She turned down Fox's offer of becoming a series regular on Prison Break in order to pursue Brothers & Sisters. In 2007 ABC and FOX agreed that Wettig could briefly reprise her role as Caroline Reynolds, providing off-camera voice-overs and appearing in a scene with Wentworth Miller. 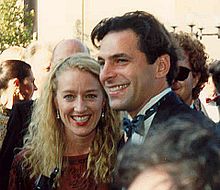 In 2012, Wettig joined the national tour for Larry Kramer's production, The Normal Heart.

Personal life
Wettig is married to actor and producer Ken Olin; they have two children, son Clifford (b. 1983) and daughter Roxanne "Roxy" Olin (b. 1985).