Julie Newmar (born Julia Chalene Newmeyer, August 16, 1933) is an American actress, dancer, and singer, known for a variety of stage, screen, and television roles as well as a writer, lingerie inventor, and real estate mogul. She won the Tony Award for Best Featured Actress in a Play for her role as Katrin Sveg in the 1958 Broadway production of The Marriage-Go-Round, and reprised the role in the 1961 film version. In the 1960s, she starred for two seasons as Catwoman in the television series Batman (1966–1967). Her other stage credits include the Ziegfeld Follies in 1956, and playing Lola in Damn Yankees! (1961) and Irma in Irma la Douce (1965) in regional productions.

Newmar appeared in the music video for George Michael's 1992 single "Too Funky", and had a cameo as herself in the 1995 film To Wong Foo, Thanks for Everything! Julie Newmar. Her voice work includes the animated feature films Batman: Return of the Caped Crusaders (2016) and Batman vs. Two-Face (2017), where she reprised her role as Catwoman 50 years after the original television series.

Early life
Newmar was born on August 16, 1933 in Los Angeles, California, the eldest of three children born to Don and Helen (Jesmer) Newmeyer. Her father was head of the Physical Education Department at Los Angeles City College and had played American football professionally in the 1920s with the 1926 Los Angeles Buccaneers of the National Football League. Her Swedish-French mother was a fashion designer who used Chalene as her professional name and later became a real-estate investor.

Newmar has two younger brothers, Peter Bruce Newmeyer (born 1935) and John A. Newmeyer (born 1940), a writer, epidemiologist, and winemaker. She began dancing at an early age, and performed as a prima ballerina with the Los Angeles Opera beginning at age fifteen. 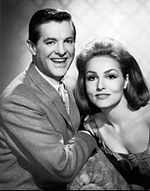 Newmar began appearing in bit parts and uncredited roles in films as dancers, including a part as the "dancer-assassin" in Slaves of Babylon (1953) and the "gilded girl" in Serpent of the Nile (1953), in which she was clad in gold paint. She danced in several other films, including The Band Wagon (also 1953) and Demetrius and the Gladiators (1954). She also worked as a choreographer and dancer for Universal Studios beginning at age nineteen. Her first major role, billed as Julie Newmeyer, was as Dorcas, one of the brides in Seven Brides for Seven Brothers (also 1954). Her three-minute Broadway appearance as the leggy Stupefyin' Jones in the musical Li'l Abner in 1956 led to a reprise in the film version released in 1959. She was also the female lead in a low-budget comedy, The Rookie (also 1959).

Newmar had first appeared on Broadway in 1955 in Silk Stockings which starred Hildegarde Neff and Don Ameche. She also appeared in the film, The Marriage-Go-Round (1961), which starred James Mason and Susan Hayward (Newmar had earlier developed the role of the Swedish vixen onstage and won a Tony Award for Best Supporting Actress for the Broadway version upon which the film was based). She later appeared on stage with Joel Grey in the national tour of Stop the World - I Want to Get Off and as Lola in Damn Yankees! and Irma in Irma La Douce. and in Mackenna's Gold (1969). She also appeared in a pictorial in the May 1968 issue of Playboy magazine, which featured Playmate Elizabeth Jordan. 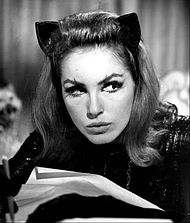 Newmar's fame stems mainly from her television appearances. Her statuesque form made her a larger-than-life sex symbol, most often cast as a temptress or Amazonian beauty, including an early appearance in sexy maid costume on The Phil Silvers Show. She starred as Rhoda the Robot on the television series My Living Doll (1964–1965), and is known for her recurring role on the 1960s television series Batman as the villainess Catwoman. (Lee Meriwether played Catwoman in the 1966 feature film and Eartha Kitt in the series' final season.) Newmar modified her Catwoman costume—now in the Smithsonian Institution—and placed the belt at the hips instead of the waist to emphasize her hourglass figure.

In 1962, Newmar appeared twice as motorcycle-riding, free-spirited heiress Vicki Russell on Route 66, filmed in Tucson, Arizona ("How Much a Pound is Albatross") and in Tennessee ("Give the Old Cat a Tender Mouse"). She guest-starred on The Twilight Zone as the devil in "Of Late I Think of Cliffordville", F Troop as an Indian princess, Bewitched ("The Eight-Year Itch Witch" in 1971) as a cat named Ophelia given human form, The Beverly Hillbillies, and Get Smart as a double agent assigned to Maxwell Smart's apartment posing as a maid. In 1967, she guest-starred as April Conquest in an episode of The Monkees ("Monkees Get Out More Dirt"), and was the pregnant Capellan princess, Eleen, in the Star Trek episode "Friday's Child". In 1969, she played a hit-woman in the It Takes a Thief episode "The Funeral is on Mundy" with Robert Wagner. In 1983, she reprised the hit-woman role on Hart to Hart, Wagner's later television series, in the episode "A Change of Hart". Both performances with Wagner included full-body grappling ending with Wagner lying on top of Newmar. In the 1970s, she had guest roles on Columbo and The Bionic Woman.

Newmar appeared in several low-budget films during the next two decades. She guest-starred on TV, appearing on The Love Boat, Buck Rogers in the 25th Century, CHiPs and Fantasy Island. She was seen in the music video for George Michael's "Too Funky" in 1992, and appeared as herself in a 1996 episode of Melrose Place.

In 2003, Newmar appeared as herself in the television movie Return to the Batcave: The Misadventures of Adam and Burt alongside former Batman co-stars Adam West, Burt Ward, Frank Gorshin and Lee Meriwether. Julia Rose played Newmar in flashbacks to the production of the television series. However, due to longstanding rights issues over footage from the Batman TV series, only footage of Meriwether taken from the feature film was allowed to be used in the television movie. In 2016, she provided the voice of Catwoman in the animated film Batman: Return of the Caped Crusaders. Newmar also appeared on The Home and Family Show in May 2016, where she met Gotham actress Camren Bicondova who portrays a younger Selina Kyle.

Entrepreneur
In the 1970s, Newmar received two U.S. patents for pantyhose and one for a brassiere. The pantyhose were described as having "cheeky derriere relief" and promoted under the name "Nudemar". The brassiere was described as "nearly invisible" and in the style of Marilyn Monroe.

Newmar began investing in Los Angeles real estate in the 1980s. A women's magazine stated, "Newmar is partly responsible for improving the Los Angeles neighborhoods on La Brea Avenue and Fairfax Avenue near the Grove."

Personal life
Newmar married J. Holt Smith, a lawyer, on August 5, 1977, and moved with him to Fort Worth, Texas, where she lived until their divorce in 1984. She has one child, John Jewl Smith (born February 1981), who has a hearing impairment and Down syndrome.

Newmar lives with Charcot–Marie–Tooth disease, an inherited neurological condition that affects 1 in 2,500 Americans.

A legal battle with her neighbor, actor Jim Belushi, ended amicably with an invitation to guest-star on his sitcom According to Jim in an episode ("The Grumpy Guy") that poked fun at the feud. An avid gardener, Newmar initiated at least a temporary ban on leaf blowers with the Los Angeles City Council.

Newmar has been a vocal supporter of LGBT rights; her brother, John Newmeyer, is gay. In 2013, she was awarded a Lifetime Achievement Award from the Gay and Lesbian Elder Housing (GLEH) organization in Los Angeles.

In popular culture
The film To Wong Foo, Thanks for Everything! Julie Newmar (1995) pays homage to the actress; Newmar herself makes a cameo appearance near the film's ending. In 2012, Bluewater Comics released a four-issue comic miniseries entitled The Secret Lives of Julie Newmar.