Beatrice J. "Bebe" Neuwirth (born December 31, 1958) is an American actress, singer and dancer. On television, she played Lilith Sternin, Frasier Crane's wife, on both the TV sitcom Cheers (in a starring role) and its spin-off Frasier (in a recurring guest role). The role won her two Emmy Awards. On stage she played the Tony Award–winning roles of Nickie in the revival of Sweet Charity (1986) and Velma Kelly in the revival of Chicago (1996). Other Broadway musical roles include Morticia Addams in The Addams Family (2010). From 2014 to 2017, she starred as Nadine Tolliver in the CBS political drama Madam Secretary.

Early life
Neuwirth's father is Lee Paul Neuwirth, a mathematician who taught at Princeton University and also made an Encrypter while working at Institute for Defense Analyses. Her mother, Sydney Anne Neuwirth, is a painter who also danced as an amateur for the Princeton Regional Ballet Company. She has an older brother Peter, a mathematician and actuary who graduated from Harvard University. Neuwirth was very lazy in school and also was disobedient towards authority, being put in custody for smoking marijuana when she was 13 years old.

Neuwirth started taking ballet lessons at the age of five, a year after viewing a production of The Nutcracker with her mother. She had a desire of being a ballet dancer until her early teens, when she realized how restricted her technique, as well as the overall ballet education of where she lived, was. Upon viewing the musical Pippin in Manhattan at 15, she changed her future plans from being a ballerina to being a Broadway musical dancer. After graduating from Princeton High School in 1976, she attended Juilliard in New York City and left after only a year, disliking the school for having a "stifling creative environment" and no Broadway-style dance training. Immediately after leaving Juilliard in 1977, she took singing and jazz classes at a New York City-based YWCA, one of them taught by Joan Morton Lucas, who appeared in the film Singin' in the Rain (1952) and the original Broadway production of Kiss Me Kate. She performed with the Princeton Ballet Company in Peter and the Wolf, The Nutcracker, and Coppélia, also appearing in community theater musicals.

Neuwirth at the Annual Flea Market and Grand Auction hosted by Broadway Cares/Equity Fights AIDS, September 26, 2006.
Studying acting for two years under Suzanne Shepard, Neuwirth made her Broadway debut in the role of Sheila in A Chorus Line in 1980. She later appeared in revivals of Little Me, (1982) Sweet Charity (1986), for which she won the Tony Award for Best Featured Actress in a Musical, and Damn Yankees (1994).

1996 saw her play Velma Kelly in the Broadway revival of Chicago. Neuwirth described the difficulty level of the role as "like performing microsurgery from 8–10:20." That role brought her her greatest stage recognition to date and several awards including the Tony Award, Drama Desk Award and Outer Critics Circle Award for Best Leading Actress in a Musical. Neuwirth would later return to the still-running revival of Chicago in 2006, this time as Roxie Hart. In 2014 she returned again, this time playing "Mama" Morton, making her the first person to play three different characters at three separate times during the course of a single Broadway run.

She appeared in a musical revue Here Lies Jenny, that featured songs by Kurt Weill, sung and danced by Neuwirth and a four-person supporting cast, as part of an unspoken ambiguous story in an anonymous seedy bar possibly in Berlin in the 1930s. The show ran from May 7 through October 3, 2004, in the Zipper Theater in New York City. Here Lies Jenny was also presented by Neuwirth in San Francisco in 2005. In 2009, Neuwirth toured a one-woman cabaret show with pianist Scott Cady. The cabaret included music by Kurt Weill, Stephen Sondheim, Tom Waits, John Lennon, Paul McCartney, John Kander and Fred Ebb amongst others. In 2010, she returned to Broadway to create the role of Morticia Addams in the original production of The Addams Family opposite Nathan Lane.

Film and television
While in Los Angeles waiting to receive a Tony Award for her appearance in Sweet Charity in 1985, Neuwirth auditioned for the role of Dr. Lilith Sternin in the television series Cheers. At the time, Neuwirth was not interested in doing television work and her character was initially planned to be in only one episode of the series. However, the writers enjoyed writing her dialogue so much that she was written into more episodes of the show, eventually making her one of the series' recurring actors.

Neuwirth's character married Frasier Crane in the show. From the fourth to the seventh season, Neuwirth portrayed Lilith in a regular recurring role, and she appeared on the show as a main star from season eight to the final season, season eleven. Like Kelsey Grammer when he started on the show as Frasier, she was not immediately given star billing in the opening credits, but at the end for seasons eight and nine, she appeared in the opening credits with her own portrait in seasons ten and eleven. She auditioned for this role with her arm in a sling, following a fall a week earlier. She won two Emmy Awards for the role, in 1990 and 1991. The character also made an appearance in the series Wings and in 12 episodes of the Cheers spin-off Frasier, which earned her a 1995 Emmy Award nomination as Outstanding Guest Actress in a Comedy Series. She left Cheers in 1993 to get back to her career in dancing, but would still make more television appearances in other shows and commercials.

Neuwirth's dip into the movie industry began in 1989 with small roles in films such as Say Anything... (1989), Pacific Heights (1990), and Penny Ante (1990). It was until 1990 that she started doing supporting roles in movies including Green Card (1990), Bugsy (1991), and Malice (1993), all of which she received acclaim from critics for her performances. Her first lead role came in 1993, when she played a married woman strangely attracted to one of her neighbors in the psychological thriller comedy film The Paint Job.

Her other credits include Jumanji, Summer of Sam, Liberty Heights, An Extremely Goofy Movie, Tadpole, The Associate, How to Lose a Guy in 10 Days, The Big Bounce, The Faculty and Woody Allen's Celebrity. 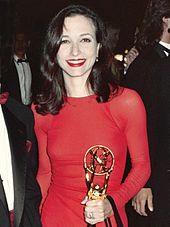 Other small-screen credits include a guest appearance in the second season of NewsRadio, a small role on The Adventures of Pete and Pete (episode: "The Call"), Deadline (2000), Hack (2003), Law & Order: Trial by Jury (2005), Law & Order: Special Victims Unit (1999 as a modeling agent/suspect; 2005 as ADA Tracey Kibre), the miniseries Wild Palms, and the fourth season Star Trek: The Next Generation episode "First Contact" as Lanel.

She appeared as herself in episodes of Will and Grace, Strangers with Candy and Celebrity Jeopardy!. In 2009, she co-starred as Ms. Kraft in the remake of Fame. She recently had a recurring role as Caroline, the literary editor of Jonathan Ames, on the HBO series Bored to Death. She was also a member of the cast of Madam Secretary on CBS. She also had a recurring role on Blue Bloods.

In 1996, Neuwirth starred in a pilot for a TV series called Dear Diary for ABC which was not picked up. The producers had it edited slightly and put into a single theater for a single weekend in November 1996, and it became one of only two TV pilots to be nominated for an Oscar and the only one to win.

Personal life
In 1984, in Newark, New Jersey, Neuwirth married Paul Dorman. She met him in 1982 after she performed a revue at O'Neal's restaurant in New York City, where he was bartending. The two divorced seven years after the marriage began. In 2009, she married Chris Calkins at the Players Club in Manhattan, in a ceremony officiated by actor Peter Coyote.

In a 2004 article in the newspaper J. The Jewish News of Northern California, she was reported as describing herself as Jewish – a "plain Jew" with "no training". In a 2011 interview she said that she was an "atheist" who "believe in unseen and unproved things" such as reincarnation.

Neuwirth has supported and worked for several non-profit charity organizations. Two hip replacement surgeries she faced from being a dancer, one of which she had in May 2006, and the stories of other dancers facing hip problems influenced her to start the Dancers’ Resource program at The Actors Fund, which caters to financial and physical needs unique to professional dancers. She has also helped Seeds of Peace.

As an animal lover, she has contributed to the Chatham, New York-based horse rescue group Equine Advocates and the annual pet adoption event Broadway Barks. Neuwirth is particularly fond of cats. In the 1990s, she owned one, Frankie, that she named after architect and writer Frank Lloyd Wright. As of August 2016, she had a black cat, Bobby, a long-haired calico cat, Tallulah, and a mixed Siamese cat, Billie.

Neuwirth does pottery in her free time, which she first did in high school.