Nancy Walker (May 10, 1922 – March 25, 1992) was an American actress and comedian of stage, screen, and television. She was also a film and television director (such as of The Mary Tyler Moore Show, on which she also made several guest appearances). During her five-decade long career, she may be best remembered for her long-running roles as Mildred on McMillan & Wife and Ida Morgenstern, who first appeared on several episodes of The Mary Tyler Moore Show and later became a prominent recurring character on the spinoff series Rhoda.

Early life
Walker was born in 1922 as Anna Myrtle Swoyer in Philadelphia, Pennsylvania, the elder of two daughters of vaudevillian Dewey Barto (né Stewart Steven Swoyer; 1896-1973) and Myrtle Flemming Lawler (January 6, 1898 – January 2, 1931), a dancer. The couple wed in Manhattan in 1919.

Nancy Walker and her father both stood 4'11" (1.50 m). Her younger sister, Betty Lou (born 1930), who had a relatively brief musical career, married Richard France in 1952. It is unclear if Betty Lou is still alive. Some sources cite 2012 as the year of her death, while other genealogical sources have conflated her with an entirely different performer, singer Eileen Barton. 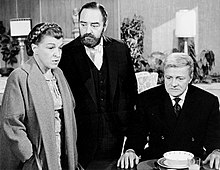 In 1937, as "Nan Barto", Walker appeared on the NBC radio programs Coast to Coast On A Bus and Our Barn. She made her Broadway debut in 1941 in Best Foot Forward. The role provided Walker with her film debut when she signed a contract with Metro-Goldwyn-Mayer to make a movie version, starring Lucille Ball (filmed in 1943). In 1943, she also appeared with Mickey Rooney and Judy Garland in the second film version of Girl Crazy. Her next film, Broadway Rhythm, in which she had a featured musical number backed by Tommy Dorsey and His Orchestra, "Milkman, Keep Those Bottles Quiet", ended Walker's contract with Metro.

Her dry comic delivery enabled her to continue acting throughout the 1940s and 1950s, originating the roles of Hildy Eszterhazy ("I Can Cook, Too!") in On the Town (1944) and Lily Malloy in Look Ma, I'm Dancin'! (1948) on Broadway. She was nominated for a Tony Award in 1956 for her work in the musical revue Phoenix '55, and again in 1960 for her performance in Do Re Mi, opposite Phil Silvers.

Walker also starred in the short-lived Broadway musical comedy Copper and Brass in 1957, and appeared in the 1958 New York City Center production of Wonderful Town. For the early 1970s revival of A Funny Thing Happened on the Way to the Forum, she appeared again opposite Silvers, playing the character of Domina. Owing to her television contractual responsibilities, she was unable to transfer with the show to Broadway. Her musical appearances led to record releases, including I Hate Men (1959; with Sid Bass and his orchestra, featuring such show tunes as "I'm Gonna Wash That Man Right Outa My Hair" and "You Irritate Me So"); the cover featured Walker humorously sticking male dolls with pins. 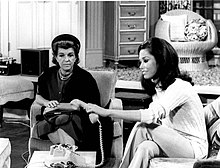 In the 1960-61 television season, she appeared in two episodes of NBC's The Tab Hunter Show. In 1970, she secured a recurring role as Emily, the housekeeper, on the television series Family Affair, which starred Brian Keith. However, after four seasons, the ratings of Family Affair had plummeted opposite NBC's popular The Flip Wilson Show, and the series was cancelled at the end of that season.

In 1970, she also made her first appearance playing Ida Morgenstern, the mother of Valerie Harper's character Rhoda Morgenstern on the first season of The Mary Tyler Moore Show. The role proved to be ideal for her. The episode which introduced her character, "Support Your Local Mother", was so well-received that it won an Emmy for Outstanding Writing Achievement in a Comedy Series for James L. Brooks and Allan Burns. Walker thereafter became an annual guest star on the show for the next three years. When the MTM spinoff series Rhoda premiered in 1974 Walker was a regular cast member.

From 1971-1976, she was a regular on the successful Rock Hudson detective series McMillan & Wife, playing the McMillans' housekeeper, Mildred. During the first two years of Rhoda, Walker was not featured every week, so she was able to shuttle back and forth between the CBS sitcom and the NBC detective series. These two roles brought her seven Emmy Award nominations. In 1976, ABC-TV offered Walker a contract to headline her own series, The Nancy Walker Show, which was produced by Norman Lear's production company, in which she starred as Nancy Kittredge, a talent agent. Walker appeared on a second-season episode of The Muppet Show.

Before she filmed the first episode of the series, Walker made her only appearance on Rhoda for the 1976-77 season. In the season premiere, "The Separation", Rhoda (Valerie Harper) and her husband Joe (David Groh) decide to separate. Rhoda tries to keep the news from her mother Ida (Walker) since Ida is about to embark on a year-long trip across America with Rhoda's father (Harold Gould). Ida learns the truth from Rhoda prior to Ida's departure. For her performance in this episode, Walker was nominated for an Emmy Award for Outstanding Single Performance By A Supporting Actress In A Comedy or Drama Series. The Nancy Walker Show premiered on ABC-TV in late September 1976. It received poor reviews and low ratings and was cancelled in December 1976.

Almost immediately, Garry Marshall signed Walker for another series, Blansky's Beauties. The main character of the series was introduced a week before the series premiere in an episode of the hit sitcom, Happy Days. The show premiered on ABC-TV in February 1977 with Walker playing Nancy Blansky, den mother to a group of Las Vegas showgirls. It failed to find an audience and was cancelled in May 1977, giving Walker the unenviable distinction of being in two failed series in the same year. She returned to Rhoda at the beginning of the 1977-78 season (giving the show a much-needed boost in the ratings, which had fallen the previous year), and remained with the series for the rest of its run. During this time, she began directing, including episodes of The Mary Tyler Moore Show, Rhoda, 13 Queens Boulevard, and Alice. 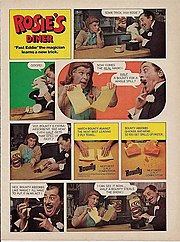 One of Walker's last major film roles was in the 1976 all-star comedy spoof Murder by Death. She continued to remain active in show business until her death, playing Rosie, a New Jersey diner waitress in a series of commercials for Bounty paper towels from 1970-90. She helped make the product's slogan, "the quicker picker upper", a common catchphrase. She credited the towel commercials with landing her the role of Ida Morgenstern.

Among her final guest appearances in a television series was the recurring role of "Aunt Angela", Sophia Petrillo's (Estelle Getty) widowed sister, on The Golden Girls, for which she received an Emmy Award nomination. Golden Girls creator Susan Harris then cast Walker opposite Bruce Weitz in her NBC sitcom project Mama's Boy, which aired as six comedy specials during the 1987-88 season, but never reached series status.

In 1990, Walker began starring on the Fox sitcom True Colors as Sara Bower, the outspoken mother of Ellen Davis Freeman (Stephanie Faracy), who moves into Ellen's household despite having objections to her daughter's interracial marriage. In 1990, Walker appeared as herself in the Columbo episode "Uneasy Lies the Crown".

In 1980, Walker made her feature film directorial debut, directing disco group The Village People and Olympian Bruce Jenner in the pseudo-autobiographical musical Can't Stop the Music. The film was a box office failure and Walker's sole feature film directorial credit. After the film, she did some stage and television directing, including three episodes of situation comedy Alice.

Death
A life-long smoker, Walker died from lung cancer in Studio City, California on March 25, 1992, aged 69. Until shortly before her death, she had continued to work on True Colors, but had only appeared in half of the second season's episodes due to her declining health. Her ashes were scattered in the Virgin Islands.

Personal life
Nancy Walker was married twice. She had a daughter, Miranda, with her second husband, musical theater teacher David Craig. David Craig died in 1998 at the age of 75 from lung cancer. Miranda Craig (born June 30, 1953) was an advertising copywriter who died at age 47 from undisclosed causes on August 24, 2000.

Walker was also a close friend of the actor Montgomery Clift. His biographer Patricia Bosworth stated the two first met in 1948, but didn't become good friends until ten years later, after Clift's disfiguring car accident. Bosworth adds that Walker would sustain him as his dearest friend for the rest of his life; their relationship was one of mutual support - whereas most of Clift's friends assumed he needed to be looked after, or else left alone, Walker stated that "he needed to be needed". She also said, "I liked his face better after the accident; his strength shone through." Clift nicknamed friends he felt particular affection for, and he called Walker "Nanny".