Early life
Franklin was born in Santa Monica, California, the daughter of Claire (née Hersch, August 24, 1911 - June 7, 2014) who outlived her and Samuel Benjamin Franklin (1902-1997), an investment banker who founded the Beverly Hills chapter of B'nai B'rith. Her parents were both Jewish immigrants, her father from Russia and her mother from Romania; they married in Montreal before moving to the United States.

Her family moved to Beverly Hills when she was 13 years old, and she graduated from Beverly Hills High School in 1961. She attended Smith College, performing in an Amherst College production of Good News as a freshman. She moved back to California to attend UCLA, and earned a bachelor's degree in English in 1966.

Career
Franklin first appeared on television at age 9 in The Colgate Comedy Hour. As a small child, she later appeared in a non-credited role in the Alfred Hitchcock film The Wrong Man. In the 1960s, she portrayed a teenage feature character in "You're the Judge," a short educational film about baking sponsored by Procter & Gamble and featuring the use of Crisco. She debuted on Broadway in 1970 in the musical Applause, earning a Tony Award nomination. Her recording of "Applause", the show's title track, was the most successful Broadway song of the season, vocally upstaging the star of the show, Lauren Bacall. Although she was on stage for only a fraction of the running time of that show, Franklin attracted a lot of attention. In its July 1970 edition, for example, Vogue published a photo spread in which the magazine predicted big careers for three young women: Melba Moore, Sandy Duncan, and Franklin.

Franklin appeared at the Paper Mill Playhouse in Millburn, New Jersey in both George M! and A Thousand Clowns. From June 22 through September 2, 1973, she appeared as Carrie Pepperidge in a production of Rodgers and Hammerstein's "Carousel" at the Jones Beach Theater on Long Island in New York in a cast that included John Cullum and Barbara Meister.

She guest-starred on several television series, including The Man from U.N.C.L.E. ("The Gazebo in the Maze Affair" from 1965) and Hazel ("Hazel Sits It Out" from 1965). She had a semi-regular role in the ABC series Gidget. She directed several episodes of the 1980s sitcom Charles in Charge and the syndicated comedy series The Munsters Today.

Franklin was best known for her portrayal of divorced mother Ann Romano on the television situation comedy One Day at a Time (1975–1984). In April 2011, Franklin and other cast members from One Day at a Time accepted the "Innovators Award" from the TV Land cable channel—one of several awards in the annual event. The citation on the TV Land web site reads:

the Innovator Award...is given to a television series that carved out new territory, tackled important issues of its day and helped re-defined its genre. The series One Day at a Time was a hybrid drama/comedy, addressed such taboo topics as pre-marital sex, suicide, sexual harassment and more, breaking barriers and paving the way for future shows to tackle these issues as well. Developed and written in part by TV visionary Norman Lear, One Day At A Time aired on CBS for nine seasons from 1975–1984. Starring Bonnie Franklin, Valerie Bertinelli and Mackenzie Phillips as Ann Romano, Barbara Cooper and Julie Cooper, the series revolved around a family headed by a single mother (Franklin) that relocates to Indianapolis, where their new apartment building super, Dwayne Schneider (Pat Harrington Jr.), befriends them. Also taking part in the cast reunion is Glenn Scarpelli, who joined the series in 1980 as the son of Ann's boyfriend, Nick. 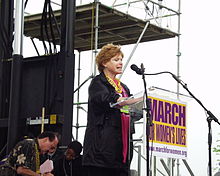 A Democrat, she supported Walter Mondale's campaign in the 1984 presidential election.

In 1988, Franklin appeared at the Bucks County Playhouse and at the Pocono Playhouse, both in Pennsylvania, in the title role of Annie Get Your Gun. Also in 1988, she appeared with Tony Musante at the Westside Arts Theatre (in Manhattan) in Frankie and Johnny in the Clair de Lune by Terrence McNally. She later performed in Who's Afraid of Virginia Woolf? at the Pittsburgh Public Theater (July 1998). In 1997, she appeared at Ford's Theatre, Washington, D.C., in All I Really Need to Know I Learned in Kindergarten (September 1999). In 2005, she appeared with Bruce Weitz at the New Theatre Restaurant in Overland Park, Kansas in 2 Across (August–September 2011). She played "Ouiser" in a production of Steel Magnolias at the Rubicon Theater, Ventura, California (October 4–October 14, 2011).

In the mid and late 2000s, Franklin appeared in nearly a dozen staged readings in the Greater Los Angeles area with Classic and Contemporary American Playwrights (CCAP), which she founded in 2001 with her sister Judy. During the 2006–2007 season, she appeared in the drama Toys in the Attic, written by Lillian Hellman. She appeared in Neil Simon's Broadway Bound at the Pico Playhouse in January 2008.

On April 28, 2012, she was among several stars who appeared at the 28th annual Southland Theatre Artists Goodwill Event (STAGE) benefit, titled Original Cast 3, at the Saban Theatre in Beverly Hills to benefit AIDS Project Los Angeles. The event raised more than $200,000 for APLA's work with clients living with HIV and AIDS in Los Angeles County. Franklin and other original-cast members from a variety of musicals performed songs with which they are associated. Franklin sang the title song from Applause, which she had originally introduced on Broadway in 1970.

Franklin appeared in several episodes of the daytime drama The Young and the Restless. The episodes were broadcast in August 2012, and only a month later she was diagnosed with terminal pancreatic cancer. The actress was cast as a nun, Sister Celeste, who came to the assistance of Victor Newman when he had amnesia while working at a shipping port in Los Angeles. In addition to her work in the theater and on television, Franklin performed in cabaret at various venues, including Le Mouches, Grand Finale, The Eighty-Eights, Triad, and The Oak Room at the Algonquin Hotel — all in New York City — and at Odette's in New Hope, Pennsylvania.

She was scheduled to appear in Joan Didion's one-woman play The Year of Magical Thinking at the Ensemble Theatre Company of Santa Barbara in April 2013, but withdrew because of illness.

Marriages
Franklin was married twice, first to playwright Ronald Sossi from 1967–1970, and then to film producer Marvin Minoff for 29 years, from 1980 until his death on November 11, 2009. Minoff had been the executive producer of a television movie, Portrait of a Rebel: The Remarkable Mrs. Sanger, which starred Franklin as Margaret Sanger, before the couple married in 1980. She had two stepchildren, Jed and Julie Minoff.

Illness and death
On September 24, 2012, a family spokesman announced that Franklin had pancreatic cancer and was undergoing treatment. Franklin died at age 69, on March 1, 2013, at her home in the Los Angeles Area. Franklin is buried next to Minoff at Mount Sinai Memorial Park Cemetery in Los Angeles.