Calista Kay Flockhart (born November 11, 1964) is an American actress. She starred as the title character in the legal comedy-drama series Ally McBeal (1997–2002), Kitty Walker in the drama series Brothers & Sisters (2006–2011) and Cat Grant in the superhero drama series Supergirl (2015–2019). She has also been featured in a number of films, including the comedy film The Birdcage (1996), the romantic comedy film A Midsummer Night's Dream (1999), and the drama film Things You Can Tell Just by Looking at Her (2000).

She is married to actor Harrison Ford.

Early life
Calista Kay Flockhart was born in Freeport, Illinois, the daughter of Kay Calista, an English teacher, and Ronald Flockhart, a Kraft Foods executive. Her parents are retired and live in Morristown, Tennessee. She has one older brother, Gary. Her mother reversed her own first and middle names in naming her Calista Kay.

Because her father's job required the family to move often, Flockhart and her brother grew up in several places including Illinois, Iowa, Minnesota, New Jersey, and Norwich, New York. As a child, she wrote a play called Toyland which she performed to a small audience at a dinner party.

Flockhart attended Shawnee High School in Medford Township, New Jersey. Following graduation in 1983, Flockhart attended Glassboro State College (now Rowan University) her freshman year, then subsequently attended the Mason Gross School of the Arts at Rutgers University in New Brunswick, New Jersey. While there, she attended a specialized and competitive class, lasting from 6:00 a.m. to 6:00 p.m. In her sophomore year at Rutgers, Flockhart met aspiring actress Jane Krakowski, the best friend of her roommate. Later, they both would work together on Ally McBeal.

People began recognizing Flockhart's acting ability when William Esper (Mason Gross' theatre director and Flockhart's acting teacher) made an exception to policy by allowing Flockhart to perform on the main stage. Though this venue usually is reserved for juniors and seniors, Harold Scott insisted that Flockhart perform there in his production of William Inge's Picnic. Flockhart graduated with a Bachelor of Fine Arts degree in Theatre in 1988 as one of the few students who successfully completed the course. Rutgers inducted her into the Hall of Distinguished Alumni on May 3, 2003.

Flockhart moved to New York City in 1989 and began seeking auditions, living with three other women in a two-bedroom apartment and working as a waitress and aerobics instructor. She would remain in the city until 1997.

Career
Early career
In spring 1989, Flockhart made her first television appearance in a minor role in an episode of Guiding Light as a babysitter. Also, she played a teenager battling an eating disorder on a one hour Afternoon Special on TV. Flockhart made her professional debut on the New York stage, appearing in Beside Herself alongside Melissa Joan Hart, at the Circle Repertory Theatre. Two years later, Flockhart appeared in the television movie Darrow. Though she later appeared in films Naked in New York (1993) and Getting In (1994), her first substantial speaking part in a film was in Quiz Show, directed by Robert Redford.

Flockhart debuted on Broadway in 1994, as Laura in The Glass Menagerie. Actress Julie Harris felt Flockhart should be hired without further auditions, claiming that she seemed ideal for the part. Flockhart received a Clarence Derwent Award for her performance. In 1995, Flockhart became acquainted with actors such as Dianne Wiest and Faye Dunaway when she appeared in the movie Drunks. Later that year, Flockhart starred in Jane Doe as a drug addict. In 1996, Flockhart appeared as the daughter of Dianne Wiest and Gene Hackman's characters in The Birdcage. Throughout that year, she continued to work on Broadway, playing the role of Natasha in Anton Chekhov's Three Sisters.

Ally McBeal
In 1997, Flockhart was asked to audition for the starring role in David E. Kelley's Fox television series Ally McBeal. Kelley, having heard of Flockhart, wanted her to audition for the contract part. Though Flockhart at first hesitated due to the necessary commitment to the show in a negotiable contract, she was swayed by the script and traveled to Los Angeles to audition for the part, which she won. She earned a Golden Globe Award for the role in 1998. Flockhart also appeared on the June 29, 1998, cover of Time magazine, placed as the newest iteration in the evolution of feminism, relating to the ongoing debate about the role depicted by her character. Flockhart starred on the show until it was canceled in 2002.

Brothers & Sisters
Flockhart performed in a starring role as Kitty Walker, opposite Sally Field, Rachel Griffiths and Matthew Rhys, in the ABC critically acclaimed prime time series Brothers & Sisters, which premiered in September 2006 in the time slot after Desperate Housewives. The show was cancelled in May 2011 after running for five years. Flockhart's character was significant throughout the series' first four years, but her appearances were reduced for the 2010–2011 season, coinciding with the departure of TV husband Rob Lowe.

Other work
Flockhart played the role of Helena in A Midsummer Night's Dream, a 1999 film version of Shakespeare's play. In 2000, she appeared in Things You Can Tell Just by Looking at Her and Bash: Latter-Day Plays, later accompanying Eve Ensler to Kenya in order to protest violence against women, particularly female genital mutilation. Flockhart also starred in the Off-Broadway production of Ensler's The Vagina Monologues.

In 2004, Flockhart appeared as Matthew Broderick's deranged girlfriend in The Last Shot. In the same year, Flockhart travelled to Spain for the filming of Fragile, which premiered in September 2005 at the Venice Film Festival. She was offered the role of Susan Mayer on Desperate Housewives but declined, and the role later went to Teri Hatcher.

In 2014, Flockhart landed a role in Full Circle's second season, as mob boss Ellen. It was expected to air in 2015. This had been Flockhart's first acting role in three years, after her hiatus when Brothers & Sisters ended.

In 2015, Flockhart was cast in the television series Supergirl as Cat Grant, a "self-made media magnate and founder of CatCo" and boss to Kara (Supergirl's alter ego). The series premiered on October 26, 2015, on CBS. Due to the network's wish to reduce the show's budget, it was moved to sister network The CW after its first season, along with a move to filming in Vancouver. Flockhart remained with the show (albeit as a recurring character), despite her previous aversion to working outside Los Angeles. 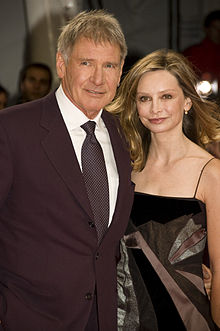 Flockhart has been in a relationship with actor Harrison Ford since their meeting at the Golden Globe Awards on January 20, 2002. They became engaged on Valentine's Day in 2009, and were married on June 15, 2010, in Santa Fe, New Mexico. The ceremony was presided over by Governor Bill Richardson and New Mexico Supreme Court Chief Justice Charles W. Daniels. Flockhart and Ford have one adopted son together, Liam Flockhart Ford (b. 2001) whom Flockhart adopted at birth.

Throughout her professional career, Flockhart has maintained her lean figure. However, many have commented that Flockhart had become dangerously thin, particularly when the actress made red carpet appearances in clothing that revealed an emaciated physique. She had maintained throughout the run of Ally McBeal that she was never diagnosed with either anorexia or bulimia, nor was she a user of illegal drugs. She did remark, however, that while starring in the show, she refrained from eating sweets, retaining her slimness with intense workouts and running. In 2006, she admitted that she had a problem at the time, and was "exercising too much" and "eating too little".

From 2004 to 2014, Flockhart served as the national spokesperson for Peace Over Violence.