Joan Van Ark (born June 16, 1943) is an American actress, known for her role as Valene Ewing on the primetime soap opera Knots Landing. A life member of The Actors Studio, she made her Broadway debut in 1966 in Barefoot in the Park. In 1971, she received a Theatre World Award and was nominated for the Tony Award for Best Featured Actress in a Play for the revival of The School for Wives.

Van Ark landed her most famous role of Valene Ewing in 1978, first on the CBS series Dallas, then for 13 seasons on its spin-off Knots Landing (1979–92). For this role, she won the Soap Opera Digest Award for Best Actress in 1986 and 1989. She left the show in 1992, although she did return for the final episode of the series in 1993 and for the 1997 miniseries Knots Landing: Back to the Cul-de-Sac. In 1985, she received a Daytime Emmy Award nomination as host of the Tournament of Roses Parade on CBS. From 2004-2005, she starred in the soap opera The Young and the Restless. She reprised her role of Valene in an episode of the new Dallas series in 2013.

At age 15, as a student reporter, Van Ark met and interviewed actress Julie Harris, who later recommended Van Ark apply to the Yale School of Drama. Harris had been the youngest student to attend the school on scholarship. Van Ark was one of the few students to attend the graduate program without first having earned an undergraduate degree. She attended for only one year. Years later, Harris appeared on Knots Landing as Lilimae Clements, the mother of Valene Ewing, Van Ark's character. 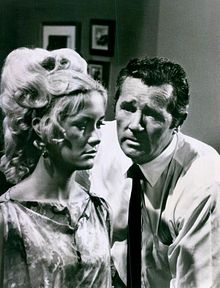 Van Ark began her professional career at the Guthrie Theater in Molière's The Miser, opposite Hume Cronyn and Zoe Caldwell. That was followed by Death of a Salesman at the Guthrie with both Cronyn and Jessica Tandy. After a season at the Arena Stage in Washington, D.C., she was then cast in the national touring company of Barefoot in the Park, directed by Mike Nichols. She recreated the role in the critically acclaimed London Company and later on Broadway. She earned a Theatre World Award and received a Tony nomination in 1971 for her performance in The School for Wives.

After receiving a contract with Universal Studios, Van Ark co-starred with Bette Davis in The Judge and Jake Wyler, a 1972 television pilot that failed to be picked up by NBC. Van Ark played the role of 'Erika' in M*A*S*H in 1973 in the episode entitled 'Radar's Report. Van Ark was also a regular castmember of the short-lived television sitcoms Temperatures Rising (1972–73) and We've Got Each Other (1977–78). After working for several years in a variety of guest roles on television, she gained her best-known role as Valene Ewing (originally as a one-time guest appearance on Dallas) in 1978. However, writers later worked the character into a couple of additional episodes; she then carried the character over into the long-running spin-off Knots Landing in 1979. She remained with Knots Landing for thirteen of the show's fourteen seasons, leaving in 1992 (although she did return for the series' final episode in May 1993). In the storyline, Valene was married three times to husband Gary Ewing (played in the series by Ted Shackelford), and had two other marriages during the show's run.

During her thirteen seasons on Knots Landing, Van Ark earned two Soap Opera Digest Awards for Best Actress and was nominated a further six times. She also directed two episodes of the series. Van Ark and co-star Michele Lee became good friends while working on the series, mirroring their characters' onscreen friendship. In May 1997, she reprised her role of Valene Ewing in the CBS mini-series, Knots Landing: Back to the Cul-de-Sac, while in December 2005, she appeared in the non-fiction reunion Knots Landing Reunion: Together Again in which she reminisced with the other cast members of the long running CBS television show.

After leaving Knots Landing, she starred in an ill-fated pilot called Spin Doctors, a sitcom for NBC that was not picked up. In addition, she originated the role of Gloria Fisher Abbott on CBS television's The Young and the Restless from 2004–2005, then decided to leave the role and was replaced by Judith Chapman.

Van Ark also appeared Off-Broadway opposite John Rubinstein in Love Letters. She co-starred in the New York production of Edward Albee's Pulitzer Prize winning play Three Tall Women. Her Los Angeles theater credits include Cyrano de Bergerac as Roxanne, as well as Ring Around the Moon, Chemin de Fer, Heartbreak House and As You Like It, for which she won a Los Angeles Drama Critics Award. She appeared as Lady Macbeth produced by Charles Johanson in the Grove Shakespeare Festival's production of Macbeth. Van Ark has also starred in the Williamstown Theater Festival productions of The Night of the Iguana, The Legend of Oedipus, and the festival's 40th anniversary production of Stephen Sondheim's A Little Night Music.

Van Ark has played a variety of guest roles in her career, including episodes of Bonanza, M*A*S*H, The Six Million Dollar Man, Petrocelli, Quincy, Kojak, Barnaby Jones, and Rhoda (in which she played the ex-wife of Rhoda's husband). She appeared in three separate episodes of Medical Center, Cannon and The Rockford Files, and four separate episodes of The Love Boat. In 1978, she also appeared in an episode of Wonder Woman with Ted Shackleford who would later become her onscreen husband Gary Ewing on both Dallas and Knots Landing. Van Ark also performed the voice of Spider-Woman in the short-lived 1979 animated series of the same name. In 1985, she hosted the Tournament of Roses Parade on CBS, which received a Daytime Emmy nomination for Outstanding Special Class Program.

In April 2001, Van Ark was featured in an episode of the Howard Stern-produced show Son of the Beach as Ima Cummings, the mother of show regular BJ Cummings (played by Jaime Bergman). In 2008, she was reunited with her Knots Landing co-star Donna Mills in an episode of the FX drama series Nip/Tuck. The same year, she also played a network executive in the film Channels.

In 2011, she performed voice work in an episode of the animated comedy series Archer. In 2013, she reprised her role as Valene Ewing, guest-starring in an episode of the new Dallas series. The same year she also appeared as a guest judge on the Logo series RuPaul's Drag Race.