Career
Child actress
Doherty had guest spots on TV series including Voyagers! and Father Murphy. When a casting notice was released in Hollywood for a regular role on the popular Little House on the Prairie, she jumped at the opportunity and at the age of 11 eventually won the recurring role of Jenny Wilder, thanks in part to actor/producer Michael Landon's seeing her guest spot on Father Murphy, which he also produced. Doherty stayed in the series until the show's cancellation in 1983.

In 1982, Doherty lent her voice to the animated film The Secret of NIMH. In 1985, Doherty starred as Maggie Malene in the teen movie comedy Girls Just Want to Have Fun alongside actresses Helen Hunt and Sarah Jessica Parker.

Doherty was cast as the oldest Witherspoon sibling, Kris, on the family drama Our House, which ran from 1986 to 1988, a role which garnered her several Young Artist Award nominations. She next appeared in an episode of Magnum, P.I. ("A Sense of Debt"), followed by an early episode of Airwolf for which she was nominated as Best Young Actress: Guest in a Series at the 6th Youth in Film Awards in 1984. 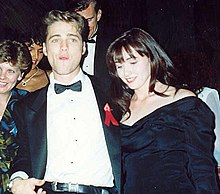 Doherty's first major motion picture role was in Heathers, released in 1988. She garnered worldwide attention and fame for her breakout role as Brenda Walsh in the Aaron Spelling-produced TV series Beverly Hills, 90210 in 1990. In 1991 and 1992 her portrayal of Brenda earned her a Young Artist Award nomination for Best Young Actress Starring in a Television Series. Doherty left the show after the fourth season in 1994. Her character was written off the show as moving to London to attend school at the Royal Academy for Dramatic Arts.

Doherty appeared nude in Playboy magazine, first in December 1993, followed by a spread in March 1994. She posed for the magazine again in December 2003 and has been featured in a 10-page pictorial.

Doherty's career afterward consisted primarily of made-for-TV movies, though she also had a lead role in Kevin Smith's 1995 film Mallrats and later cameoed in Jay and Silent Bob Strike Back. In 1998, Spelling again cast her in another of his television series, Charmed, in which she played lead character Prue Halliwell, the oldest of three sisters who are witches. Doherty also directed a few episodes for the series during the second and third seasons. Doherty left the show in 2001 at the end of the third season, resulting in her character's death. Reportedly, the reason for her departure was because of on-set and off-set tensions between Doherty and co-star Alyssa Milano. Doherty was also twice nominated, in 1999 and 2000, for the Saturn Award, Best Genre TV Actress, for her performance in Charmed. In 2004, E! placed Doherty at number 10 on their list of the 50 Most Wicked Women of Prime Time. In 2007, AOL named Prue Halliwell the 10th greatest witch in television history.

Later work: 2002–present
In 2003, Doherty hosted the Sci Fi Channel candid camera show Scare Tactics during its initial season. After her stint on Scare Tactics Doherty, in a return to her prime-time soap roots, starred as a regular on the short-lived TV series North Shore. She starred as Alexandra Hudson from 2004 to 2005. Later in 2005, she was in the pilot for a comedy, Love Inc..

Doherty then produced and starred in her own reality show, Breaking Up with Shannen Doherty, which premiered on the Oxygen channel in 2006. In the show, Doherty goes around doing "dirty work" for members of the public, including dumping boyfriends or telling people what their friends really think about them. The show was canceled after one season owing to poor ratings. She also starred in the popular British sitcom Bo! in the USA, a brain child of Leigh Francis. In the show, she plays herself being randomly harassed by Avid Merrion (Francis), who claims they are lovers. The show aired in October 2006 on the British Channel 4, and she appeared in several episodes.

During 2007, Doherty appeared in two television projects. She first appeared in Kiss Me Deadly: A Jacob Keane Assignment for the Here TV network and followed up with a starring role in the holiday film Christmas Caper for ABC Family. That same year Doherty also set up a production company called No Apologies for which she planned to develop a TV drama for herself. Later in 2007, Doherty was ranked number 96 on Entertainment Weekly's list of the 100 Greatest Television Icons. In 2008, Doherty was featured on the Swedish television show High Chaparall, appearing in the second episode of the show's fourth season. 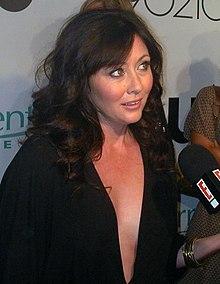 Also in 2008, 14 years since her last television appearance as Brenda Walsh, Doherty joined the cast of the Beverly Hills, 90210 spin off for The CW Television Network for a reported $40,000–50,000 an episode. She returned as a guest star, reprising her old role of Brenda Walsh in four of the new series' initial six episodes. Her character, now a successful theater actress and stage director, returned as the guest director of the high school musical. After her initial guest spot was completed, Doherty stated she was open to returning to the series later in the season and eventually agreed to appear in three additional episodes, with her most recent appearance airing in May 2009. The writers were eager to have her share scenes with Jennie Garth, who also reprised her 90210 role of Kelly Taylor. It was reported that Doherty and Garth's characters would both have a romantic interest in the character Ryan Matthews (Ryan Eggold) reminiscent of their old rivalry for former bad-boy character Dylan McKay (Luke Perry). Doherty and Garth later confirmed that the reports about the love triangle between their characters were false.

In late 2008, Doherty was announced to co-star alongside Dylan McDermott in the independent film Burning Palms, a satire based on Los Angeles stereotypes told through five intertwining storylines. (The film's world premiere was at the Newport Beach Film Festival in April 2010.) Doherty played a lead role in the SciFi Channel adventure film The Lost Treasure of the Grand Canyon. The film premiered on the cable network on December 20, 2008.

On March 1, 2010, it was announced that Doherty would be a celebrity contestant on Dancing with the Stars for the tenth season. The season premiered on Monday, March 22, 2010. Doherty was paired with two-time champion Mark Ballas in his sixth season on the show, but the pair was the first couple eliminated in the second week on March 30. The judges have said, "Doherty wouldn't have left if we would have just done scores". She wanted to do Dancing with the Stars to make her ailing father proud. Doherty returned for the finale.

Doherty starred in FEARnet's animated web series Mari-Kari, which launched on June 3, 2010. Mari and Kari are identical twins, but Kari is already dead and is a ghost. Doherty voiced both Mari and Kari in the eight-episode show. WE tv announced on July 21, 2011, that she would star in a one-hour reality series that follows her and her fiancé, Kurt Iswarienko, as they plan their wedding. The show, titled Shannen Says, premiered in April 10, 2012. Later in 2012, Doherty became a spokesperson for Education Connection, and appeared in an episode of The New Normal as her character Brenda Walsh from Beverly Hills, 90210.

On July 24, 2014, it was announced that Doherty and her former Charmed co-star Holly Marie Combs would be starring in their own road trip reality show called Off the Map with Shannen & Holly, which premiered on Great American Country on January 2, 2015. The six-episode series follows the pair traveling across southeastern United States, with stops in Kentucky, Tennessee, Mississippi, Alabama, Georgia and Florida. Viewers were able to vote on activities in which Doherty and Combs engaged at each destination on Great American Country's official website.

In November 2016, Doherty joined the cast of a Heathers television series, originally set to air on Paramount Network in March 2018. She would play the mother of one of the new generation of "Heathers", different from the character of Heather Duke which she originated in the 1988 film. However the show's premiere was delayed by the Parkland school shooting because of its dark tone and themes of high school violence before the network chose to pull the show altogether in June 2018. Ultimately, the series aired over five nights in October 2018.

Doherty will reprise her role of Brenda Walsh in the upcoming sequel BH 90210, which is scheduled to debut August 7, 2019 on FOX.

Personal life
In early 1993, Doherty was briefly engaged to Max Factor heir Dean Jay Factor before he filed for a restraining order on May 25, 1993. He alleged physical violence and threats on the part of Doherty, although Doherty's father claimed that the abuse came from Factor and not her.

On October 11, 1993, Doherty married Ashley Hamilton, the son of actor George Hamilton. They filed for divorce in April 1994.

Reputation
Beginning with her stint on Beverly Hills, 90210, Doherty gained a reputation in the media for bad behavior that dominated her public image for many years. People Magazine has called her the "iconic Hollywood 'bad girl' of the nineties." Between 1992 and 1994, coverage alleging fighting between Doherty and her co-stars dominated tabloid headlines, particularly concerning her heated feud with Jennie Garth, and further reports of heavy partying, on-set lateness, and physical fights. The zine magazine Ben Is Dead, which published a newsletter called "I Hate Brenda" at the height of the show's popularity, even opened a hotline called the "Shannen Snitch Line" to which people could call in and report gossip about Doherty.

This reputation gained further ground during her three seasons on Charmed, when tabloids fueled rumors of a feud with co-star Alyssa Milano. In both instances, Doherty departed the shows acrimoniously after a few seasons; on Charmed she was allegedly fired by producer Aaron Spelling after an ultimatum from Milano.

90210 executive producers Darren Star and Charles Rosin have both confirmed that Doherty was difficult on-set; Rosin commented that "...she had habitual lateness. Her lateness was appalling, and she had a callous attitude and an indifference." Jennie Garth has admitted that the two of them "often wanted to claw each other's eyes out", and at one point it escalated into physical violence; nonetheless, she has said the feud was mutual and based more on immaturity than true animosity. Doherty, for her part, has admitted to making mistakes, blaming her behavior on the pressures of fame, her youth, and problems in her personal life. In 2010, she stated: "I have a rep. Did I earn it? Yeah, I did. But, after awhile [sic] you sort of try to shed that rep because you're kind of a different person. You've evolved and all of the bad things you've done in your life have brought you to a much better place."

Health
Doherty was diagnosed with breast cancer in March 2015, which had spread to her lymph nodes. In February 2016, Doherty revealed that she was receiving anti-estrogen treatment to shrink the tumor and enable treatment by lumpectomy rather than mastectomy. Due to the presence of multiple tumors a lumpectomy was not possible, so a single mastectomy was performed in May 2016. Surgery revealed that some of the cancer cells may have spread beyond the lymph nodes. Because the cancer was more advanced than previously thought, Doherty underwent chemotherapy and radiotherapy following surgery. On April 29, 2017, Doherty announced that her cancer was in remission.