Early life
Joyce DeWitt was born April 23, 1949, in Wheeling, West Virginia, and grew up in Speedway, Indiana, a suburb of Indianapolis. She graduated from Speedway Senior High School, and once worked at the Indianapolis Motor Speedway ticket office. She is of Italian descent on her mother's side, and Dutch from her father. She competed in speech and debate through the Indiana High School Forensic Association. After she received a bachelor's degree in theater from Ball State University, she moved to California to earn her master's degree from the University of California and graduated in 1974. 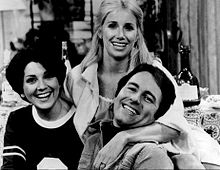 DeWitt began appearing on stage at the age of 13. While attending university, she worked as a secretary until her debut on Baretta. Contrary to internet rumours, she was not mentored by actor Abe Vigoda, and the two have never met. While performing in summer stock in the year following her graduation, a director and UCLA Theater professor convinced her to go to California for the school's MFA program.

DeWitt is best known for her role as Janet Wood during the 1977–1984 run of the sitcom Three's Company, a job she obtained after being cast in the show's second pilot.

After Three's Company ended in 1984, DeWitt appeared in an episode of Finder of Lost Loves in 1984, after which she quit acting for several years. She resumed acting with a part in a production of Noises Off at Michigan's Cherry County Playhouse in June 1991. She later appeared in the 1995 TV comedy film Spring Fling! A character based on her, voiced by another actress, appeared in a 1997 episode of Pinky and the Brain. She made an appearance in an episode of Cybill, and had a cameo on the penultimate episode of Living Single. Her 2000s works includes TV shows such as Hope Island, The Nick at Nite Holiday Special and Call of the Wild.

DeWitt later co-produced and hosted the 2003 NBC-TV television film Behind the Camera: The Unauthorized Story of Three's Company; actress Melanie Paxson portrayed De Witt in the film. In late 2008, she also earned a part in an independent film called Failing Better Now.

In 2009, DeWitt starred in a stage production of Married Alive in Calgary, Canada.

As of 2011, DeWitt was starring in the play Miss Abigail's Guide to Dating, Mating & Marriage in New York City. In 2011, she also appeared in a Canadian stage production of Dinner with Friends at Theatre Aquarius in Hamilton, Canada.

In 2012 DeWitt appeared on Suzanne Somers' talk show, Suzanne Somers: Breaking Through, during which she and Somers reminisced about their time on Three's Company together. Somers apologized for the conflict that arose between them, and they exchanged anecdotes about the last time they each spoke to John Ritter. The appearance on her show marked the first time the two ever saw or spoke to each other since having a major falling out in 1981.

In 2018, DeWitt played Mother Superior in a stage production of Nunsense at the Huntington Hills Playhouse in New Jersey.

Charity work
DeWitt participated with members of the House and Senate at the Capitol Hill Forum on Hunger and Homelessness, and has hosted presentations for the Family Assistance Program of Hollywood. She hosted the International Awards Ceremony at the White House for the Presidential End Hunger Awards, and co-hosted, with Jeff Bridges, the World Food Day Gala at the Kennedy Center.

Arrest
On July 4, 2009, DeWitt was arrested in El Segundo, California, and cited for drunken driving. According to press reports, police pulled her over after she drove past a barricade near a park. An officer arrested the actress after he observed signs she had been drinking and administered a field sobriety test. She was booked at the police station, cited, and released on her own recognizance. On May 27, 2010, she pleaded no contest to one count misdemeanor and was placed on three years' probation and ordered to undergo a nine-month alcohol program. She was also ordered to pay a $510 fine, plus penalty assessments. In exchange for her plea, a second misdemeanor count was dismissed.