Early life
Katherine Victoria Litwack was born on June 13, 1986 in Bryn Mawr, Pennsylvania. Her mother, Ellen Judith Litwack, is a poet and speech therapist, and her father, Gerald J. Litwack, is a molecular pharmacologist, and college professor and chairman. Dennings is the youngest of five children, including an older brother, Geoffrey S. Litwack. Her family is Jewish.

Dennings was homeschooled; her only enrollment at a traditional school was for a half-day at Friends' Central School. She graduated from high school early, at the age of 14. She moved with her family to Los Angeles, so that she could pursue acting full time. She adopted the surname "Dennings" as her professional name when she was younger.
Career
2000–2003: Early career
Dennings began her career in commercials at the age of 10. Her first acting job was an ad for potato chips. Dennings made her professional debut with an appearance on HBO's Sex and the City in 2000, in the episode "Hot Child in the City", playing an obnoxious 13-year-old who hires Samantha to handle publicity for her bat mitzvah. She then starred on the short-lived WB sitcom Raising Dad from 2001 to 2002 as Sarah, a 15-year-old raised by her widowed father (Bob Saget), with a pre-teen sister (Brie Larson). In 2002, Dennings appeared in the Disney Channel film The Scream Team as a teenager who stumbles into a group of ghosts. She was cast for a five-episode run on The WB's Everwood, but the role was recast with Nora Zehetner. 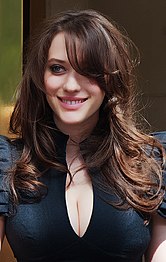 Dennings continued working on television, guest-starring on Without a Trace as a teen whose boyfriend goes missing, and on Less than Perfect in 2003. In February 2004, she was cast in a pilot for CBS titled Sudbury, about a family of modern-day witches, based on the 1998 film Practical Magic, but the series was not picked up. Dennings had a recurring role on ER from 2005 to 2006 as Zoe Butler, and guest-starred in the CSI franchise twice: first on CSI itself, as Missy Wilson, in the 2004 episode "Early Rollout". Then, on CSI: NY as Sarah Endecott, in the 2005 episode "Manhattan Manhunt".

Dennings made her feature film debut in Hilary Duff's Raise Your Voice in 2004 as Sloane, a somber piano student. In 2005, she landed supporting roles in The 40-Year-Old Virgin as Catherine Keener's character's daughter, and in Down in the Valley. She played a rebellious teenager in the 2006 film Big Momma's House 2, starring Martin Lawrence.

Dennings starred in Charlie Bartlett in 2008, the story of a wealthy teenager (Anton Yelchin) who acts as a psychiatrist for his new public high school. She played Susan Gardner, Bartlett's love interest, and the daughter of the school's principal (Robert Downey, Jr.). Dennings appeared in The House Bunny that year, as Mona, a pierced feminist sorority girl. She also starred in the teen romance Nick and Norah's Infinite Playlist, with Michael Cera. Dennings played Norah Silverberg, the daughter of a famous record producer, and was nominated for the International Press Academy's Satellite Award for Best Actress for the performance.

In September 2008, Dennings hoped to make Don DeLillo's novel End Zone into a film. Actors Sam Rockwell and Josh Hartnett were involved, but the project was not greenlit because of its controversial subject matter of nuclear war.

In 2009, Dennings appeared in The Answer Man, a story about a celebrity author whose manifestos become a sort of new Bible. She also co-starred in the Robert Rodriguez-directed dark children's film Shorts that year. She played the protagonist Toe (Jimmy Bennett)'s teenage older sister, Stacey Thompson. Dennings and other rising stars were featured in the August 2009 issue of Vanity Fair, re-enacting scenes from famous Depression-era films, hers being Sydney Pollack's They Shoot Horses, Don't They? (1969).

Dennings was subsequently cast in the romantic comedy film Liars (A to E). However, the Richard Linklater-directed project was cancelled due to cut backs at Miramax Films by the studio's parent company, Disney. Dennings appeared in the superhero film Defendor in 2009, starring Woody Harrelson and Sandra Oh, playing a crack-addicted prostitute.

The following year, she starred in the independent feature Daydream Nation as a girl who moves from the city to a strange rural town, and is caught in a love triangle with her high school teacher (Josh Lucas) and a teenage drug dealer (Reece Thompson). The film began shooting in Vancouver in early 2010, and was written and directed by Michael Golbach. In May 2010, Dennings appeared in a music video for "40 Dogs (Like Romeo and Juliet)", a single by Austin, Texas-based musician Bob Schneider. Robert Rodriguez directed the video, which was filmed in various locations around Austin.

Dennings was part of the cast of the Marvel Studios film Thor, released in May 2011, and directed by Kenneth Branagh. She played Darcy Lewis, a tech-savvy, shy sidekick and assistant to Natalie Portman's character, Jane Foster. The film went into production in January 2010, and was shot in New Mexico for six weeks in early 2010. 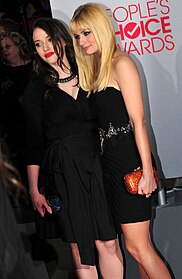 In February 2011, Dennings was cast in 2 Broke Girls, a CBS sitcom written and produced by Michael Patrick King and comedian Whitney Cummings. The series debuted on September 19, 2011 and follows the lives of two underemployed girls. Beth Behrs co-stars as a Manhattan heiress who lost her inheritance, while Dennings plays a tough outspoken girl from Brooklyn. Dennings liked the idea of reaching a wider audience with her work, so she accepted the role on the network sitcom. On May 12, 2017, CBS canceled the series after six seasons.

Dennings starred in the drama film To Write Love on Her Arms (originally titled Renee) in 2012, with Chad Michael Murray and Rupert Friend. She played Renee Yohe, a Florida teenager who struggled with substance abuse and self-injury, and who inspired the founding of the nonprofit organization To Write Love on Her Arms. The film began production in Orlando, Florida, in February 2011. In mid-2012, Dennings filmed the independent feature Suburban Gothic, playing a small-town bartender.

Dennings introduced The Black Keys at the 55th Grammy Awards on February 10, 2013. She appeared in a music video for the Hanson single "Get the Girl Back", alongside Nikki Reed. The actresses are close friends and are both fans of the pop group. The video premiered on April 4, 2013. In 2013, Dennings reprised her role as Darcy Lewis in Thor: The Dark World. She worked on the film and 2 Broke Girls at the same time, flying to London to film for six months between breaks on her CBS sitcom.

Personal life
Dennings blogged from January 2001 until February 20, 2010, on her website and also transitioned into video blogging on YouTube. Dennings stated to The Jewish Journal of Greater Los Angeles that Judaism "is an important part of my history, but, as a whole, religion is not a part of my life." The article went on to say that she considers herself more ethnically and culturally affiliated than religiously so.

In December 2008, Dennings told BlackBook magazine, "I don't drink and I don't smoke and I don't like being around people who do." In 2013, The New York Times reported that Dennings practices Transcendental Meditation.