She was the daughter of Edward Paycen Churchill, a producer who owned a chain of theaters, and Marguerite N. Graham. Her father died when she was ten years old. She was educated in New York City at the Professional Children's School and the Theatre Guild Dramatic School. She appeared on stage and was applauded on Broadway as a leading lady when just sixteen years old. An official of Fox Film saw her acting and gave her a contract which shortly afterwards led her to debut on screen in The Diplomats. 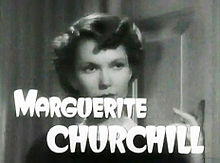 Churchill played leading lady to John Wayne in Raoul Walsh's The Big Trail (1930), an early widescreen epic and Wayne's first leading role. She appeared with Wayne the following year in Girls Demand Excitement (1931), with Spencer Tracy and George Raft in Quick Millions (1931), with Will Rogers in Ambassador Bill (1931), with Warner Oland in Charlie Chan Carries On (1931), with George O'Brien in Riders of the Purple Sage (1931), with Charles Farrell in Girl Without a Room (1933), with Ralph Bellamy in The Final Hour (1936), with Boris Karloff in The Walking Dead (1936), and with Edward Van Sloan in Dracula's Daughter (1936).

Family
Churchill appeared in more than 25 films. She was married for 15 years to her one-time costar George O'Brien from July 15, 1933, until their divorce in 1948. They had three children, one of whom was novelist Darcy O'Brien, whom she outlived by two years. Her daughter Orin has played double bass for the New York Philharmonic Orchestra since 1966. A third child, Brian, died in infancy in 1934.

After her divorce from O'Brien, she appeared in one movie and a few television plays. In 1954, she announced her engagement to Peter Ganine, a sculptor. In the "California Marriage Index, 1949–1959", there is a record of marriage and file date of June 5, 1954, for Peter Ganine and Marguerite Churchill.

Death
She died on January 9, 2000, aged 89, from natural causes in Broken Arrow, Oklahoma. She was survived by her daughter, Orin.