In 2014, she was a contestant on season 18 of Dancing with the Stars, finishing in third place. She also starred as Summer van Horne on Make It or Break It. She is the sister of actor Kirk Cameron, known for Growing Pains. From 2015 to 2016, she was a co-host of the daytime television talk show The View.

Career
This section's tone or style may not reflect the encyclopedic tone used on Wikipedia. See Wikipedia's guide to writing better articles for suggestions. (March 2019) (Learn how and when to remove this template message)
Bure guest-starred in roles on shows such as St. Elsewhere, Growing Pains, and Who's the Boss? (Among the roles for which she auditioned was the lead on Small Wonder, which ultimately went to Tiffany Brissette.) In a 1985 episode of the sitcom Punky Brewster, Cameron portrayed a girl named Jennifer Bates who had been kidnapped by her father. In 1987, she had a role as the youngest sister of Eric Stoltz in the teen comedy Some Kind of Wonderful.

Bure began the most prominent role of her career in 1987 on the ensemble sitcom Full House, as Donna Jo "D.J." Tanner, the oldest daughter. The long-running series ended in 1995, and she was a member of the cast during its entire run.

While on Full House, she was also featured in the made-for-TV movies No One Would Tell, playing an abused teen; She Cried No, as a date-raped teen; NightScream, a mystery; and Camp Cucamonga, an adventure comedy. Cameron guest-starred in the failed pilot Real Mature, and in an episode of Bill Nye The Science Guy as "Candace the Science Gal". She also appeared in the Tom Hanks and Sally Field feature film Punchline.

Bure hosted the Nickelodeon Kids' Choice Awards in 1990 with her Full House co-star Dave Coulier and David Faustino, and again in 1994 with Joey Lawrence and Marc Weiner, becoming the first person to host twice or more (followed by Whitney Houston, Rosie O'Donnell, and Jack Black).
After Full House 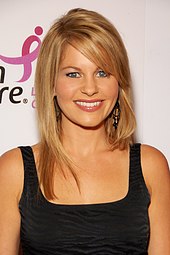 After Full House ended in 1995, Bure guest-starred on Cybill and Boy Meets World.

After the birth of her children, she took a self-imposed hiatus from television and film to devote her time to her family and children. In the 2000s, she appeared as an interviewee on the retrospective I Love the '80s and I Love the '80s Strikes Back. She would later co-host 50 Cutest Child Stars: All Grown Up on the E! network, along with Keshia Knight Pulliam of The Cosby Show fame.

In 2007, she guest-starred on the sitcom That's So Raven. The following year, she co-starred with Randy Travis in The Wager and starred with Tom Arnold in the television movie Moonlight and Mistletoe for the Hallmark Channel in 2008. Cameron returned to a television series in 2009 and was cast in Make It or Break It, The series ended in 2012.

On March 4, 2014, she was announced as one of the celebrities to compete on season 18 of Dancing with the Stars. Her professional partner was Mark Ballas. The couple made it to the finals and ultimately ended in third place behind Amy Purdy and Meryl Davis who took second and first place, respectively.

It was announced in 2015 that Bure would reprise her role as D.J. Tanner in the 2016 Netflix spinoff Fuller House, her character now going by D.J. Tanner-Fuller. Filming began that July 2015. The following month, it was announced that Bure would become a co-host of The View, starting with season 19. In March 2016, Fuller House was picked up for a second season. ABC also announced in August 2016 that Bure would return as a co-host of The View for season 20. On December 8, 2016, Bure announced that she was leaving The View due to commitments with Fuller House and Hallmark Channel projects, and the bi-coastal commutes being tough on both her and her family. In January 2019, Fuller House was renewed for its fifth and final season to air later that year.

Hallmark
Bure has added the title of executive producer to her many television credits. While she has acted in a number of Hallmark channel movies, including the 2017 Switched for Christmas, she is producing a one-hour Christmas special called Christmas in America. The special will feature people all over America as they celebrate, take part in outdoor festivals, Christmas light festivities, and more. With her daughter Natasha, she will serve as the host of the 26th annual Movieguide Awards for the network on February 8, 2019.

Personal life
Cameron married Russian NHL hockey player Valeri Bure on June 22, 1996. The couple was first introduced at a charity hockey game by her Full House co-star Dave Coulier. They have three children: a daughter, Natasha (born 1998), and two sons (born 2000 and 2002). Her daughter Natasha Bure competed in season 11 of The Voice at the age of 18. Her brother-in-law is hockey hall of famer Pavel Bure.

Bure is a conservative Republican. She became a Christian at the age of 12, and she credits her faith as the binding force in her marriage. She has revealed she suffered from bulimia nervosa in her early twenties.

I figure this is my time - to relax, be with my family and have a normal life.
I'm so happy and thankful I made it a point be a stay-at-home mom.
It's amazing. My kids have grown me in ways I never knew possible. The patience I've received and the love I get from them is just amazing.
Almost everyone thinks they are a good person, but the question you should be asking is, am I good enough to go to Heaven? How would you know?
Once you find love, you find it. There isn't an age on love.
The cool thing about my profession is that I can do it until the day I die.
Once I got my driver's license everybody treated me like I was an adult.