Early life and career
Amanda Blake was born Beverly Louise Neill in Buffalo, New York, the only child of Jesse and Louise (née Puckett) Neill. Her father was a banker; Blake herself was a telephone operator before she took up acting. Catherine ″Kate" Moore Barry (1752–1823), one of her ancestors, was a heroine of the American Revolutionary War. She warned local patriots of Banastre Tarleton's approach, giving them time to group and prepare for the Battle of Cowpens (January 17, 1781), a major American victory that helped pave the way for the British defeat at Yorktown. Blake placed a cameo-sized portrait of Barry owned by her family in the local history museum in Spartanburg, South Carolina, at which it remains on display. 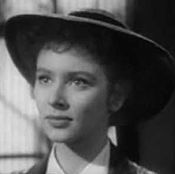 Nicknamed "the Young Greer Garson", she became best known for her 19-year stint as the saloon-keeper Miss Kitty on the television series Gunsmoke from 1955 to 1974.

Prior to that, Blake had appeared in a few Hollywood films, such as the 1952 western Cattle Town and in the starring role of Miss Robin Crusoe, a 1954 adaptation of the Robinson Crusoe adventure. In 1968, Blake was inducted into the Hall of Great Western Performers at the National Cowboy and Western Heritage Museum in Oklahoma City. She was the third performer inducted, after Tom Mix and Gary Cooper, selected in 1958 and 1966, respectively.

Because of her continuing role on television, Blake rarely had time for films. She did appear on a number of television shows, including a recurring comedy routine on The Red Skelton Show, as a panelist on the long-running Hollywood Squares, Tattletales, and the 1970s revival of Match Game, as well as comedy appearances on the Dean Martin Celebrity Roast. In 1957, she guest-starred as Betty Lavon-Coate in the episode titled "Coate of Many Colors" on Rod Cameron's crime drama, State Trooper. After the Gunsmoke reunion film, she made two feature-film appearances: in The Boost, a drug-addiction drama starring James Woods and Sean Young, and B.O.R.N, both in 1988.

Marriages
Don Whitman (1954 - 1956) (divorced)
Jason Seymour Day Jr. (1964 - 1967) (divorced)
Frank Gilbert (1967 - 1982) (divorced)
Mark Edward Spaeth (1984 - 1985) his death)
Animal welfare
After Gunsmoke, Blake went into semi-retirement at her home in Phoenix, Arizona, and took on few film or television projects. She instead devoted more time to her animals. She had been known for bringing her pet lion, Kemo, onto the Gunsmoke set.[6] Kemo lived in an animal compound at her home, at which she and husband Frank Gilbert ran an experimental breeding program for cheetahs. They were some of the first to breed cheetahs successfully in captivity; they raised seven generations of cheetahs.

Blake joined with others in 1971 to form the Arizona Animal Welfare League, today the oldest and largest "no-kill" animal shelter in the state. In 1985, she helped finance the start-up of the Performing Animal Welfare Society and devoted a great deal of time and money in support of its efforts, including travels to Africa. Blake reportedly was a one-time board member of the Humane Society of the United States. In 1997, the Amanda Blake Memorial Wildlife Refuge opened at Rancho Seco Park in Herald, California. The refuge provides sanctuary for free-ranging African hoofed wildlife, most of which were originally destined for exotic animal auctions or hunting ranches.

Declining health and death
Blake was a heavy cigarette smoker and had surgery for oral cancer in 1977. She became a supporter of the American Cancer Society and made fundraising appearances throughout the country. In 1984, she was the recipient of the society's annual Courage Award, which was presented to her by then U.S. President Ronald Reagan. Blake died at age 60 on August 16, 1989, at Mercy General Hospital in Sacramento, California. The popular media later widely reported that Blake's doctor claimed that she had actually died of AIDS. Her close friends have insisted that she was not a drug user or sexually promiscuous, and that she may have acquired the disease from a former husband. Blake's official death certificate stated the cause of death as: "Cardio-pulmonary arrest due to liver failure and CMV Hepatitis".