Mayim Chaya Bialik (born December 12, 1975) is an American actress, author, and neuroscientist. From 1991 to 1995, she played the title character of the NBC sitcom Blossom. Bialik later played neurobiologist Amy Farrah Fowler on the CBS sitcom The Big Bang Theory from 2010 to 2019. Outside of her acting career, she holds a Ph.D. in neuroscience. For her role as Fowler, Bialik has been nominated four times for the Primetime Emmy Award for Outstanding Supporting Actress in a Comedy Series and won the Critics' Choice Television Award for Best Supporting Actress in a Comedy Series in 2015 and 2016.

Early life
Mayim Chaya Bialik was born on December 12, 1975, in San Diego, California, to Barry and Beverly (née Winkleman) Bialik. Her family were Jewish immigrants who lived in The Bronx, New York City, and three of her four grandparents migrated from Poland, Czechoslovakia, and Hungary. Bialik was raised as a Reform Jew, but now considers herself to be Modern Orthodox Jewish. Bialik has also described herself as a "staunch Zionist". Her personal name, Mayim ('water' in Hebrew), originates in a mispronunciation of Miriam, her great-grandmother's name. Hayim Nahman Bialik was her great-great-grandfather’s uncle.

Bialik attended Walter Reed Junior High School (now Walter Reed Middle School) and graduated in 1993 from North Hollywood High School in North Hollywood, California. In acknowledgment of her acting commitments, she was granted a deferred acceptance and attended UCLA. She stated that she wanted to stay close to her parents and did not want to move to the East Coast.

Bialik earned a BS degree in neuroscience, with minors in Hebrew and Jewish studies. Because she did not have the grades needed for medical school Bialik went on to study for a doctorate in neuroscience. She took a break from studies in 2005 to return to acting. Bialik returned to earn her Ph.D. in neuroscience from UCLA in 2007. Her dissertation was an investigation of hypothalamic activity in patients with Prader–Willi syndrome, entitled "Hypothalamic regulation in relation to maladaptive, obsessive-compulsive, affiliative and satiety behaviors in Prader–Willi syndrome." 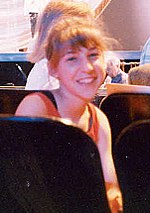 Bialik started her career as a child actress in the late 1980s. Her early roles included the horror film Pumpkinhead (1988), her first acting job, and guest appearances on The Facts of Life and Beauty and the Beast. In 1988-1989, she had a recurring role on the TV comedy Webster playing Frieda, Webster's classmate, in 8 episodes. It was for her Beauty and the Beast work, in which she played a sewer-dwelling girl named Ellie who had about 10 lines of dialogue, that Bialik obtained her Screen Actors Guild (SAG) card. She appeared in three episodes of MacGyver as Lisa Woodman. She appeared in Beaches (1988), playing Bette Midler's character as a young girl. She also appeared in the video for the song "Liberian Girl" by Michael Jackson. In 1990, Bialik was tied to two television pilots, Fox's Molloy and NBC's Blossom. Molloy at first produced six episodes for a tryout run, followed by the shooting of the pilot special for Blossom. The latter actually aired two weeks before Bialik's Fox series and ultimately garnered higher ratings than the former. When Molloy folded after its six episodes, Blossom premiered as a mid-season replacement on January 3, 1991, and aired until May 22, 1995.

Bialik had a major part in the Woody Allen comedy film Don't Drink the Water in 1994. On September 8, 1992, Bialik was a celebrity contestant guest in the episode "Disturbing The Heavenly Peace", the first episode of the second season of the game show Where In The World Is Carmen Sandiego?. Between 1995 and 2005, Bialik mostly did voice-over work for cartoons, such as The Real Adventures of Jonny Quest, Disney's Recess and Kim Possible, Cartoon Network's Johnny Bravo, and Nickelodeon's Hey Arnold!. She appeared in the feature film Kalamazoo? (2005) and appeared in three episodes of the HBO comedy series Curb Your Enthusiasm as Jodi Funkhouser, the lesbian daughter of a friend of Larry David. Bialik also made guest appearances as a fictionalized version of herself in the series Fat Actress and made a guest appearance in an episode of Saving Grace. 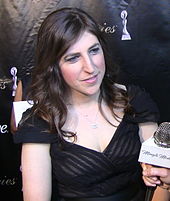 She had a recurring role as the high school guidance counselor in ABC Family's The Secret Life of the American Teenager. In 2009, Bialik was nominated by Clinton Kelly for a makeover on TLC's What Not To Wear. She joined the cast of The Big Bang Theory as Dr. Amy Farrah Fowler in September 2010. Her first appearance was in the season 3 finale as a potential love interest for the character of Sheldon Cooper (Jim Parsons). In season 4, she began as a recurring character playing Sheldon's "friend that's a girl, but not a girlfriend." Beginning with the 8th episode of season 4, she became part of the main cast. The character Amy is a neurobiologist, which is related to Bialik's real-life doctorate in neuroscience. Bialik's performance in The Big Bang Theory earned her Emmy Award nominations in 2012, 2013, 2014, and 2015 for Outstanding Supporting Actress in a Comedy Series. Bialik was one of seven actresses who had a "quirky" personality to audition for the role. Prior to her joining the cast, in the episode "The Bat Jar Conjecture", Raj suggests recruiting the real-life Bialik to their Physics Bowl team, saying "You know who's apparently very smart is the girl who played TV's Blossom. She got a Ph.D. in neuroscience or something." She is cast as one of the guest stars on the Steve Carell 2014 improvisational sketch show Riot.

In August 2014, Bialik began hosting a revival of Candid Camera on TV Land alongside Peter Funt. On March 6, 2012, her book, Beyond the Sling: A Real-Life Guide to Raising Confident, Loving Children the Attachment Parenting Way, was released. Her most recent movie appearance was in a Lifetime Christmas movie, The Flight Before Christmas in 2015.

In 2019 she appeared in a commercial for IBM.

Other works and writings
Grok Nation
Bialik founded Grok Nation in August 2015 for people of different ages and backgrounds to have conversations on contemporary issues. It aims to engage readers in online conversations that lead to offline action, mobilizing individuals toward changing the world as a community. To grok means to understand in a profound manner. The term comes from the 1961 science fiction novel Stranger in a Strange Land by Robert A. Heinlein. Bialik had been writing on a similar area for JTA-affiliated Jewish parenting site Kveller for five years. She announced and described her new creation on the site. Along with former Sassy editor Christina Kelly, she relaunched Grok Nation as a women's lifestyle site in March 2018.

Books
Bialik has written two books with pediatrician Jay Gordon and two by herself. Beyond the Sling is about attachment parenting, while Mayim's Vegan Table contains over one hundred vegan recipes written by Bialik. Her third book, called Girling Up, is about the struggles and ways in which girls grow up while showing the scientific ways in which their bodies change. The successor to Girling Up, Boying Up, was released on May 8, 2018. The book analyzes the science, anatomy and mentality of growing up as a male as well as discussing the physical and mental changes and challenges boys face with while transitioning from adolescence to adulthood.

The New York Times op-ed
After the Harvey Weinstein sexual misconduct allegations surfaced, Bialik penned an op-ed in The New York Times in which she described the entertainment industry as one "that profits on the exploitation of women ... [and] the objectification of women". With regard to protecting herself from sexual harassment, Bialik wrote that she dressed modestly and did not act flirtatiously with men, adding, "In a perfect world, women should be free to act however they want. But our world isn't perfect. Nothing – absolutely nothing – excuses men for assaulting or abusing women. But we can't be naïve about the culture we live in." Bialik's article drew immediate backlash from critics who said Bialik was insinuating that modesty and a conservative wardrobe can guard one against sexual assault, with Patricia Arquette tweeting, "I have to say I was dressed non provocatively at 12 walking home from school when men masturbated at me. It's not the clothes." In response, Bialik stated she regretted that the piece "became what it became" and participated in a Facebook Live hosted by The New York Times to answer questions about the piece.

Personal life
Bialik married Michael Stone on August 31, 2003, in a Victorian-themed ceremony that included traditional Jewish wedding customs. Stone was born into a Mormon family and converted to Judaism. Bialik and Stone have two sons, Miles (b. 2005) and Frederick (b. 2008). The couple divorced in November 2012. In December 2018, she revealed that she and her boyfriend of 5 years broke up.

In 2010, Bialik returned to television so that she could spend more time with her children; "I'm glad that I completed my PhD and I'm very proud of it, but the life of a research professor would not have suited my needs in terms of what kind of parenting I wanted to do." In addition, Bialik had explained that her "health insurance was running out", via the COBRA program. She had sought out SAG (Screen Actor Guild) health insurance for herself and her two sons.

In a 2012 interview, Bialik said she sees herself as an "aspiring Modern Orthodox". Bialik has also described herself as a "staunch Zionist". She is a self-professed fan of The Maccabeats, an American Orthodox Jewish a cappella group based at Yeshiva University, and appeared with her two sons lighting the menorah in the group's 2011 Hanukkah music video. During the 2014 Gaza Conflict, she donated money to the IDF for armored vests. She has also appeared in several YouTube cameos as Blossom and Amy Farrah Fowler asking questions about Jewish beliefs. The videos are produced by Allison Josephs, Bialik's Judaism study partner, whom she encountered with the help of Partners in Torah. Bialik is a celebrity spokesperson for the Holistic Moms Network.

In 2014, Bialik was awarded an honorary D.H.L. degree from Boston University.

Bialik is a vegan and a founding member of the Shamayim V'Aretz Institute, a Jewish organization that advocates for the ethical treatment of animals.

She said on The Late Late Show with James Corden that she identified herself as a feminist. In 2017 she announced that she and vegan Chef Ali Cruddas co-own a Bodhi Bowl, vegan restaurant in Los Angeles.