Melissa Marie Benoist (born October 4, 1988) is an American actress and singer. She has performed on stage and in television and film. She is known for her portrayal of the titular character in the CBS/CW DC Comics–based superhero drama series Supergirl (2015–present).

On stage, Benoist made her Broadway debut in 2018 as Carole King in the jukebox musical Beautiful: The Carole King Musical.

Early life and education
Benoist was born in Houston, Texas, the daughter of Julie and Jim Benoist, a physician. They divorced when she was young. Her paternal great-grandfather was of French descent. She has two biological sisters: Jessica, a novelist, and Kristina, an ecological scientist, and five half-siblings from her father's remarriage. She was raised mostly by her mother in the suburbs of Denver, Colorado, after her parents' separation.

She started dance classes at the age of three, focusing on jazz, ballet, and tap. When she was four years old, her aunt put her in a church play she was directing; after that, she began doing community children's theatre in her hometown.

As a teenager, Benoist performed anonymously at Disneyland in various medleys of musical songs for three summers with the Academy of Theatre Arts, a musical theatre school she was attending, located in Littleton, Colorado, run by Paul Dwyer and Alann Worley. She performed locally in a number of theatrical productions, including A Month in the Country, Cinderella, A Chorus Line, and Bye Bye Birdie at the Town Hall Arts Center, a professional theatre located in the Denver metro area. Instead of attending high school graduation parties, she performed the play Evita with other cast members at the former Country Dinner Playhouse.

In 2006, The Denver Post named Benoist one of Colorado's five "Can't Miss Kids". She graduated from Arapahoe High School in Centennial, Colorado, in 2007, and then she moved to New York City to pursue a career in musical theatre. She initially attended Marymount Manhattan College for the BFA musical theatre program but in her sophomore year, she switched majors to straight theatre, due to her admiration for 19th-century Russian plays. She graduated from Marymount Manhattan College with a Bachelor of Arts in Theatre Arts in 2011. While attending Marymount Manhattan college, she played the titular characters Millie Dilmount in an urban off-off-Broadway production of Thoroughly Modern Millie and Rosalind in As You Like It at the Theresa Lang Theatre.

Career
2008–2011: Early work
Benoist's first film was in Tennessee in 2008 along with singer Mariah Carey. Afterwards, she made guest appearances on shows like Law & Order: Criminal Intent, Blue Bloods and The Good Wife, while attending college. She played Kelly in the 2011 Goodspeed Musicals theatrical production of The Unauthorized Autobiography of Samantha Brown by Brian Lowdermilk and Kait Kerrigan at the Norma Terris Theatre. 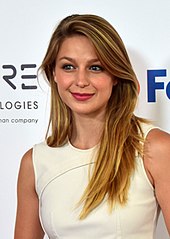 In May 2012, she auditioned for the musical comedy-drama series Glee in New York at the Roundabout Theatre Company, singing a different song for each of her five auditions including: "Fidelity" by Regina Spektor, "King of Anything" by Sara Bareilles, a Colbie Caillat song, and several musical theatre pieces. In July, she had two screen tests in California for series creator/writer, Ryan Murphy, the casting directors, and executive producers. She portrayed Marley Rose on the fourth and fifth seasons of Glee. Her first appearance as Marley Rose was in the first episode of Season Four, titled The New Rachel. Because the creators had been looking for Marley for a long time, she started working the day she found out she got the job. Benoist's first performance was a duet of "New York State of Mind" with Lea Michele, during the first episode of season 4. The cover of the song reached twenty-four on the Bubbling Under Hot 100 Singles chart. She and Glee co-star Darren Criss appeared with Josh Duhamel in the opening of the 2013 Kids' Choice Awards. That same year, she was selected as an ambassador for Coca-Cola's new product, P10 300 mL Coke Mismo. In June 2013, they were flown to Manila, Philippines, to endorse the product by visiting various malls and meeting with fans. She left the series Glee in early 2014, along with several other actors.

In the summer of 2013, Benoist and Blake Jenner held a Kickstarter campaign to help fund the production of their feature film Billy Boy. The project reached its $100,000 goal.

She had a role in the 2015 film Danny Collins, starring Al Pacino. She played the part of Jamie, a desk clerk at a hotel frequented by one of Jamie's all-time favorite rock stars. That same year, Benoist also played Becky Thatcher in Band of Robbers, the Nee Brothers's modern-day retelling of The Adventures of Tom Sawyer and Adventures of Huckleberry Finn. In May 2015, it was announced that Benoist would be playing Lorelai in the film Low Riders, replacing Lily Collins and Nicola Peltz, who were in talks for the role previously. In August of that year, she landed the leading role in the Screen Gems drama feature film Oxford, with Sam Heughan as her leading man.

2015–present: Supergirl and Broadway debut
In October 2015, the superhero adventure series Supergirl, with Benoist in the lead role of Kara Zor-El, premiered on CBS. She became the first woman to lead a prime time superhero TV series since Wonder Woman went off the air in 1979. The premiere was watched by 12.96 million viewers and received a full season order by CBS on November 30, 2015. She was reportedly the first actress looked at for the role. Benoist generally received positive reviews for her portrayal of Kara Zor-El. The series later moved to The CW before its second season premiere. She reprised her role in The CW's Arrowverse crossovers "Invasion!", "Crisis on Earth-X", "Elseworlds", and "Crisis on Infinite Earths" as well as The Flash episode "Duet". She reprises her role as Earth-X's Supergirl doppelgänger Overgirl in the CW Seed animated series Freedom Fighters: The Ray.

In May 2016, Benoist was cast as Katherine Russell, the widow of deceased Boston Marathon bomber Tamerlan Tsarnaev, in Peter Berg's drama film Patriots Day. In June, it was announced that she was set to start alongside Michael Angarano in the comedy-drama film Sun Dogs. Also in that month, the Human Rights Campaign released a video in tribute to the victims of the 2016 Orlando gay nightclub shooting; in the video, Benoist and others told the stories of the people killed there.

In April 2017, Benoist was cast as Rachel Koresh, the legal wife of Branch Davidian leader David Koresh in Paramount Network's miniseries Waco. Benoist was featured in "The Super Duper Minecraft Musical!" which was made for Minecraft's Super Duper Graphics Pack in November.

On May 7, 2018, it was announced that Benoist would be playing the titular character in the Broadway show Beautiful: The Carole King Musical at the Stephen Sondheim Theatre, which marked her Broadway debut for a limited run from June 7 through August 4, 2018.

Personal life
During her first semester in college, when she was learning to ride a bike, a cab backed into her and left a visible scar above her eyebrows. She also has a tattoo of a bicycle on her left foot.

In 2015, Benoist suffered an injury that tore her iris when she hit her eye on a potted plant after falling down stairs. The incident caused one pupil to be permanently enlarged.

Also in 2015, it was announced that she and her Glee co-star Blake Jenner were married. Benoist commented that they had been married "longer than anybody knows," with some sources claiming that the couple actually wed the same year of their engagement in 2013. In late December 2016, she filed for divorce citing "irreconcilable differences". The divorce was finalized in December 2017.

Additionally, in October 2017, Benoist helped with Chris Wood's launch of his website "I Don't Mind" that works to put a stop to the stigma around mental illnesses, admitting that she has struggled with depression and anxiety attacks since she was 13 years old. She said that Wood's words enabled her to admit to others her own issues with depression. On February 10, 2019, the two announced their engagement.