Early life
Anderson was born in Saint Paul, Minnesota, the daughter of Maxine Hazel (née Kallin; 1924–1985), a model, and Klaydon Carl "Andy" Anderson (1922–1977), an environmental chemist. She grew up in suburban Roseville, Minnesota. As a senior at Alexander Ramsey Senior High School in Roseville, she was voted Valentine Queen of the Valentine's Day Winter Formal of 1963. She attended the University of Minnesota. As she says in her autobiography, My Life in High Heels, her father was originally going to name her "Leiloni" but then realized to his horror that when she got to her teen years it was likely to be twisted into "Lay Loni". So it was changed to simply "Loni".

Career
Her acting debut came with a bit part in the film Nevada Smith (1966), starring Steve McQueen. After that, she went virtually unemployed as an actress for nearly a decade, before she finally began achieving guest roles on episodic television series in the mid-1970s. She appeared in two episodes of S.W.A.T., and later appeared on the sitcom Phyllis, as well as the detective series Police Woman and Harry O. In 1978, she guest-starred as Susan Walters on a season two episode of the popular sitcom Three's Company, after auditioning well but not winning the role of Chrissy at the start of the series. Her appearance on the show brought her to the attention of the ABC network.

Anderson's most famous acting role came as the sultry receptionist Jennifer Marlowe on the sitcom WKRP in Cincinnati (1978–1982). She was offered the role when producers saw the poster of her in a red swimsuit—a pose similar to Farrah Fawcett's famous 1976 pin-up. The sitcom's creator, Hugh Wilson, later admitted Anderson got the role because her body resembled Jayne Mansfield and because she possessed the innocent sexuality of Marilyn Monroe.

Although the series suffered in the Nielsen ratings throughout the majority of its four-year run, it had a strong and loyal following among teenagers, young adults and disc jockeys. Owing to her rising popularity as the series' so-called "main attraction", Anderson walked out on the sitcom during the 1980 summer hiatus, requesting a substantial salary increase. During her hiatus, while she was renegotiating her contract, she starred as blonde bombshell Jayne Mansfield in the CBS made-for-television film The Jayne Mansfield Story (1980). After the network agreed to her requests, Anderson returned to the series and remained with it until its cancellation in 1982. The series has since remained popular in syndication around the world.

Aside from her acting career, Anderson has become known for her colorful personal life, particularly her relationship and marriage to actor Burt Reynolds. They starred in the comedy film Stroker Ace (1983), which was a critical and box office failure. She later appeared as herself in the romantic comedy The Lonely Guy (1984), starring Steve Martin. She voiced Flo, a collie in the animated classic film All Dogs Go to Heaven (1989). 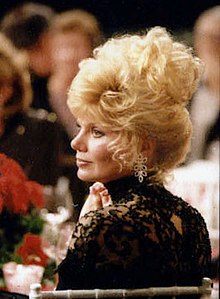 In the mid-to-late 1980s, Anderson's acting career gradually declined. She was teamed with Wonder Woman actress Lynda Carter in the television series, Partners in Crime in 1984. She appeared in television adaptations of classic Hollywood films, such as A Letter to Three Wives (1985) with Michele Lee, and Sorry, Wrong Number (1989) with Patrick Macnee and Hal Holbrook, both of which received little attention. After starring in Coins in the Fountain (1990), Anderson received considerable praise for her portrayal of comedian actress Thelma Todd in the television movie White Hot: The Mysterious Murder of Thelma Todd (1991). In the early 1990s, she attempted to co-star with her husband Burt Reynolds on his new CBS sitcom Evening Shade, but the network was not fond of the idea, thus replacing Anderson with Marilu Henner. After Delta Burke was fired from the CBS sitcom Designing Women in 1991, producers offered Anderson a role as Burke's replacement, which never came to pass because the network refused to pay Anderson the salary she had requested. She agreed to return as Jennifer Marlowe on two episodes of The New WKRP in Cincinnati, a sequel to the original series. In 1993, Anderson was added to the third season of the NBC sitcom Nurses, playing hospital administrator Casey MacAffee. Although her entering the series was an attempt to boost the series' ratings, the series was canceled shortly thereafter. Anderson has since returned to guest-starring on several popular television series, such as playing the "witch-trash" cousin on Sabrina the Teenage Witch and as Vallery Irons' mother on V.I.P. She also starred in the comedy film A Night at the Roxbury (1998).

Anderson has two children: a daughter, Deidre Hoffman (fathered by Hasselberg), who was a school administrator in California; and a son, Quinton Anderson Reynolds (born August 31, 1988), whom she and Reynolds adopted. She also has a sister named Andrea Sams. Anderson's autobiography, My Life in High Heels, was published in 1997.

Growing up with parents of the World War II generation, who both smoked, Anderson witnessed the effects of chronic obstructive pulmonary disease (COPD), a lung disease often caused by smoking. In 1999, she became a spokesperson about COPD. During a visit to Seattle for a COPD education campaign, Anderson became reacquainted with future husband Bob Flick.

In 2009, her daughter Deidre was diagnosed with multiple sclerosis.

I have an education degree from the University of Minnesota, and I was a teacher for about a minute.
If somebody invented cigarettes today, the government would not legalize them.
Almost every person over 45, and definitely those who have ever smoked, should have a spirometry test.
My memory of my mom is a wine glass in one hand and a cigarette in the other. She was a runway fashion model, and she was quite a glamorous woman.
I am the odd man out in the family.
My dad had emphysema and both of my parents had chronic bronchitis and ended up with cancers - all smoking related.
I've been working with the National Lung Health Education Program to raise awareness about Chronic Obstructive Pulmonary Disease.
As a brunette, I had previously been this serious actress. Then I became a blonde and got to play a completely different, comic role.
I talk about acting to students making the transition from high school to UCLA. Kids going into this profession really need to know the reality of it.
It's amazing to me that young people will still pick up a cigarette.