Early life
Teigen was born in Delta, Utah. Her mother is Thai and her father is of Norwegian descent. Teigen's father worked as an electrician and the family moved often. After living in Hawaii, Idaho, and Washington, the family eventually settled in Huntington Beach, California when Teigen was a teenager. Teigen attended Snohomish High School in Washington state where she was a cheerleader. She was discovered by a photographer while working in a surf shop. 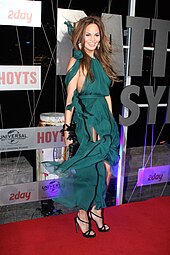 She is represented worldwide by IMG Models in New York. She became an IGN Babe in 2004 and a substitute model on Deal or No Deal for 2006–2007. In July 2007, she appeared on the cover of Maxim's calendar. Her campaigns include Gillette Venus, Olay, Nike, Skullcandy headphones, Gap Factory, XOXO, UGG Australia, Rock and Republic, Billabong, Beach Bunny Swimwear (for whom she was also a fashion week correspondent), and Nine West Fashion Targets Breast Cancer. She has also served as a recurring guest host and contributor on E!, TMZ, MTV, FUSE/MSG, and Extra with Mario Lopez, and has appeared on America's Next Top Model and Watch What Happens Live. In spring 2013, she was host of the reality competition show, Model Employee on VH1. Teigen appeared in the Sports Illustrated swimsuit issue in 2010, and was named "Rookie of the Year". Her friend and fellow model Brooklyn Decker had introduced her to the people at Sports Illustrated to cast her. She was also a part of the 2011, 2012, 2013 and 2014 Sports Illustrated Swimsuit issues. In 2014, she appeared on the 50th anniversary cover of the Sports Illustrated Swimsuit Issue with Nina Agdal and Lily Aldridge.

In addition to Sports Illustrated, Teigen has appeared on the cover of Ocean Drive magazine, Cosmopolitan, and in editorials for Italian Vogue, Esquire, Glamour, Galore and Cosmopolitan. Other side projects include designing a capsule collection with swimwear designer DiNeila Brazil (which debuted at Mercedes-Benz Fashion Week Swim in Miami in the summer of 2011) and appearing as a featured character in the 2011 EA Sports video game Need For Speed: The Run. When not working in the world of fashion modeling, Teigen is a cook and writer. She was also featured on an additional Cooking Channel special in February 2013, titled Chrissy Teigen's Hungry, detailing her wedding menu tasting with then-fiancé John Legend. Teigen recently filmed a Cooking Channel special titled Cookies and Cocktails.

In 2012, Teigen was named Spike TV's "Our New Girlfriend." In 2013, Teigen appeared in her husband John Legend's music video for the song "All Of Me", which was inspired by their relationship. In April 2014, Teigen appeared on an Inside Amy Schumer sketch playing a fictionalized version of herself as a relationship counselor. Teigen appears as a judge on the new MTV2 cooking show Snack-Off. In January 2015, Teigen appeared as a guest star on The Mindy Project as the girlfriend of the man to whom Mindy lost her virginity. In April 2015, Teigen became a co-host on Spike, later Paramount Network's Lip Sync Battle alongside LL Cool J. Teigen co-hosted the Billboard Music Awards with Ludacris. From September 2015 until June 2016, she was the food stylist on Tyra Banks's lifestyle talk show FABLife.

On October 11, 2017, Teigen released a clothing line, in collaboration with Revolve.

In 2018, to coincide with the release of her second cookbook, Teigen released a line of cookware, Cravings by Chrissy Teigen, available through Target.

In February 2019, Teigen was announced as a judge for NBC’s upcoming comedy competition series Bring the Funny.

Teigen is in development on the show Chrissy's Court, a Judge-Judy-style courtroom reality series, set to launch in April 2020 on Quibi. Teigen will star in and serve as executive producer for the series.

As author
On February 23, 2016, Teigen published Cravings: Recipes for All of the Food You Want to Eat, edited by Francis Lam, which was a New York Times bestseller and the second-best selling cookbook of the year, according to Publishers Weekly. On September 18, 2018, Teigen released her second book, titled Cravings: Hungry For More, also known as Cravings 2.

Political views
Teigen identifies as a liberal and is a critic of U.S. President Donald Trump and has garnered media attention for her impersonation of him at a Families Belong Together march.

Additionally, Teigen has rallied behind two political causes in the past, women's reproductive rights and immigrants' rights. In 2018, she made headlines for making a series of donations of $72,000 to the ACLU for the 72nd birthday of U.S. President Donald Trump. Additionally, she has publicly supported Planned Parenthood and made donations to the organization after the Planned Parenthood Shooting in Colorado Springs in 2016.

Personal life
Teigen married singer John Legend on September 14, 2013, in Como, Italy. Legend proposed to Teigen in December 2011, after four years of dating; they first met on the set of his 2007 music video for "Stereo." The song "All of Me" was dedicated to her. They have two children, a daughter born in April 2016 and a son born in May 2018. Both children were conceived via in vitro fertilization. She has spoken openly about her battle with postpartum depression.