Born Name: Joan Smalls Rodriguez
Date of Birth: 11 July, 1988
Place of Birth: Hatillo, Puerto Rico
Nationality: Puerto Rican
Alma mater: Interamerican University of Puerto Rico
Occupation: Model/Actress
Parents: Eric Smalls, Betzaida Rodriguez
Years active: 2007–present
Modeling information
Height: 1.79 m (5 ft 10 1⁄2 in)
Hair color: Brown
Eye color: Brown (EU) 83-61-87
Agency: IMG Models
Joan Smalls Rodriguez (born July 11, 1988) is a Puerto Rican supermodel and actress. In 2013 and 2018 she ranked at #8 on Forbes magazine's "World's Highest-Paid Models" list. In 2011, she became the first Latina model to represent Estée Lauder cosmetics. In January 2014, Smalls appeared on the "Return of the Supermodel" cover of American Elle. In 2012, Smalls was ranked the number #1 model in the world by Models.com; she is currently ranked as one of the New Supers in the fashion industry. In 2010, Smalls began modeling for Victoria's Secret, and was featured in the Victoria's Secret Fashion Show from 2011 to 2016.

Early life and education
Joan Smalls Rodríguez was born and raised in Hatillo, Puerto Rico. She has two sisters. Her father, Eric Smalls, is an accountant, and is West Indian from St. Thomas, U.S. Virgin Islands of African and Irish ancestry. Smalls' mother, Betzaida Rodríguez, is a social worker, who is Puerto Rican, and of Spanish, Taino, and Indian (South Asian) heritage. Smalls graduated magna cum laude from the Interamerican University of Puerto Rico with a bachelor's degree in psychology. Upon graduation, she moved to New York City to become a model. She was signed by Elite Model Management in 2007. In 2009, she left Elite Model Management and signed with IMG Models worldwide, where she changed her focus to runway work. She was signed as a Givenchy exclusive for Riccardo Tisci's Spring/Summer Haute Couture show in January 2010, and her modeling career took off. 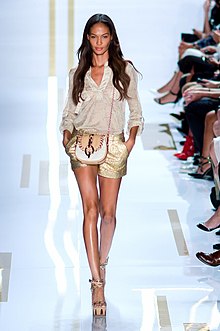 Other
In 2017, W Hotels Worldwide appointed Supermodel Joan Smalls as the first ever Global Fashion Innovator. Smalls will help create, shape and innovate W’s global fashion platform around the world. From special appearances and distinct collaborations to exclusive in-room and digital content, Smalls will add her signature style and taste to the W Hotel guest experience. 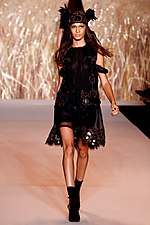 In 2011, Estée Lauder signed Smalls to its line-up of global beauty ambassadors. She is the first Latina signed to a worldwide campaign for the brand. Richard Ferretti, Estée Lauder's global creative director stated, "The word supermodel is overused, but if there's any woman of our generation who deserves the title, it's Joan. She can go from looking girl-next-door to superchic-tough-strong—and she is all of that."

In 2015, Smalls teamed up with Estée Lauder to create 12 New Matte Lipsticks for the cosmetics giant. The Supermodel provided inspiration for the 12 new shades, including a broad selection of reds, pinks, chocolatey browns and a dark burgundy (all permanent additions to the Estée Lauder line).

Television and media
Smalls served as co-host (along with model Karlie Kloss) of the MTV fashion series House of Style. She was featured alongside singer Bruno Mars in the June 2011 edition of Vogue. In 2006 she appeared in Ricky Martin's "It's Alright" music video. In November 2013, she co-starred with actor Michael K. Williams in the music video and short film for the American rapper ASAP Rocky's track "Phoenix", written by Asia Argento and Francesco Carrozzini and directed by Carrozzini. In 2013, she appeared in Beyoncé's "Yoncé" video.

She will appear as a guest judge on the ninth season of the reality competition RuPaul's Drag Race.

Design
In 2015, Smalls designed a Denim Collection, Joan Smalls x True Religion. Photographer Steven Klein shot Smalls for the True Religion collection ad campaign. In 2017, Smalls teamed up with the Smart and Sexy brand, to create a line of lingerie and swimwear to be sold at Walmart.

Awards and recognition
In September 2012, Smalls was named "Model of the Year" at the 9th Annual "Style Awards". Supermodel Iman presented Smalls with the award. In 2013, Smalls ranked #8 on Forbes magazine's "World's Highest-Paid Models" list, earning an estimated $3.5 million.

In September 2012, Smalls was ranked #1 on the "Top 50 Models Women" list by Models.com. She remained at the top of the list until August 2014, when the site named her as one of the "New Supers". In January 2014, Smalls appeared on the cover of American Elle and was featured in the article "The Return of the Supermodel: It's Joan Smalls".

In April 2014, supermodel Cindy Crawford posted an update on her Facebook page calling Smalls one of her favorite new models. Crawford wrote, "[...] She has great style—sexy and elegant with a touch of tomboy thrown in! And she showed off her great moves in the "Yoncé" video!"

Philanthropy
Smalls is involved with a non-profit organization called Project Sunshine, where she helps children with medical needs. Smalls was part of the ‘Jeans for Refugees’ campaign, a Johny Dar project and artistic fundraising initiative dedicated to helping refugees around the world, with all proceeds going to the International Rescue Committee. She has also been involved with The Garden of Dreams Foundation, a non-profit organization that works with The Madison Square Garden Company and MSG Networks, Inc. to positively impact the lives of children facing obstacles.