Early life
Iman was born in Atlanta, Georgia in 1990. She grew up in Los Angeles, California. Her mother is half African American and half Korean and her father is African American. 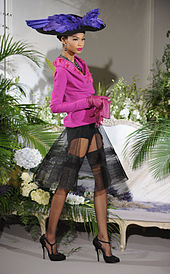 Iman started modeling with Ford Models at the age of 12 as a child model in Los Angeles, California. She flew to New York in 2006 and won third place in Ford's Supermodel of the World contest. Shortly after, she signed on with the agency. She has appeared in editorials for Allure, Dubai, American, and Ukrainian Harpers Bazaar, V, i-D, Pop, Italian, British, and Indonesian Elle, Italian Vanity Fair, and several international Vogues. In February and July 2007, Iman appeared on the cover of Teen Vogue, with Karlie Kloss and Ali Michael, photographed by Patrick Demarchelier, then in November 2009 she appeared on the cover again, this time with Jourdan Dunn. Iman's other covers include American, British, and Italian Elle, American and French L'Officiel, i-D, Dubai and Ukrainian Harper's Bazaar, Lula, Korean, Teen, and American Vogue.

Television
In October 2007, Iman appeared with her mother on an episode of the Tyra Banks Show. On March 21, 2009, she appeared as a correspondent in MTV's brief revival of House of Style with Bar Refaeli. On September 9, 2009, Iman appeared as a guest judge on the two-hour season premiere of America's Next Top Model, Cycle 13 and also appeared on an episode of America's Next Top Model, Cycle 23 posing with the contestants of that cycle.

She also made an appearance on a January 2016 episode of Spike's Lip Sync Battle, as part of Olivia Munn's performance of Taylor Swift's "Bad Blood".

Activism
In 2011, Iman traveled to East Africa on a work trip where she became one of a handful of celebrities attached to USAID and Ad Council's FWD campaign, an awareness initiative tied to that year's drought in East Africa. She joined Uma Thurman, Geena Davis and Josh Hartnett in TV and internet ads to "forward the facts" about the crisis. As an advocate for education, Chanel is currently working on setting up primary schools in impoverished rural areas in Tanzania and Uganda. Her immense passion for charity work led her to sponsor several young girls in Kenya as well, in which she contributes funds for their daily necessities and academic tuition.

In May 2011, editor-in-chief of American Vogue, Anna Wintour, chose Iman to co-host her Runway to Win fundraising event in Chicago. In conjunction with the event, Iman designed a backpack to raise money for President Barack Obama's 2012 campaign. She also attended a dinner with President Obama at actress Sarah Jessica Parker's house.

On December 2, 2017, Iman announced her engagement to New York Giants Wide Receiver Sterling Shepard. The couple married on March 3, 2018 at the Beverly Hills Hotel. On August 10, 2018, Iman gave birth to the couple's daughter.

Iman can also play the piano and contributed to "Just Right", a song from Ryan Leslie's self-titled debut album. She is an avid reader and enjoys works by Khaled Housseini and Dan Brown. Iman states that if she wasn't a supermodel, she would have applied to the Culinary Institute of America as she has a passion for food, cooking, and loves being creative with recipes.