Born: Valerie Kathryn Harper
Date of Birth: August 22, 1939
Place of Birth: Suffern, New York, United States
Residence: Ashland, Oregon, United States
Height: 1.68 m
Occupation: Actress
Years active: 1956–2016
Spouse(s): Richard Schaal(m. 1964; div. 1978)
Tony Cacciotti (m. 1987)
Children: Cristina Harper
Valerie Kathryn Harper (born August 22, 1939) is an American actress. She began her career as a dancer on Broadway, making her debut in the musical Take Me Along in 1959. Harper is best remembered for her role as Rhoda Morgenstern on The Mary Tyler Moore Show and its spin-off Rhoda in the 1970s. For her work on Mary Tyler Moore, she thrice received the Primetime Emmy Award for Outstanding Supporting Actress in a Comedy Series, and later received the award for Outstanding Lead Actress in a Comedy Series for her work on Rhoda.

From 1986 to 1987, Harper appeared as Valerie Hogan on the sitcom The Hogan Family. Her most notable film appearances include roles in Freebie and the Bean (1974) and Chapter Two (1979), both of which garnered her Golden Globe Award nominations. Harper returned to stage work in her later career, appearing in several Broadway productions. In 2010, she was nominated for the Tony Award for Best Actress in a Play for her performance as Talullah Bankhead in the play Looped.

Early life
Harper was born in Suffern, New York, the daughter of Iva Mildred (née McConnell; February 8, 1910—Oct 7, 1988) and Howard Donald Harper (January 10, 1907- September, 1981). Her father was a lighting salesman, and her mother was born in Canada and trained as a nurse. She is the middle child of three siblings. She has an older sister, Leah; a younger brother, Merrill (who later took the name "Don") and a half-sister, Virginia, from her father's second marriage.

She has stated that her parents were expecting a boy and after her arrival, her first and middle names derived from that year's women's doubles tennis champions, Valerie Scott and Kay Stammers. She is of French, English, Irish, Scottish, and Welsh ancestry. Harper based her character Rhoda Morgenstern on her Italian stepmother, Angela Posillico, and Penny Ann Green (née Joanna Greenberg), with whom she danced in the Broadway musical Wildcat. She was raised Catholic, although at an early age she "quit" the church.

Career
Broadway dancer and improv
Harper began as a dancer and chorus girl on Broadway, and went on to perform in several Broadway shows, some choreographed by Michael Kidd, including Wildcat (starring Lucille Ball), Take Me Along (starring Jackie Gleason), and Subways Are For Sleeping. In-between she was also cast in Destry Rides Again but was forced to leave rehearsals due to illness. Her roommate, actress Arlene Golonka, introduced her to Second City improvisation theater and to improv performer Dick Schaal, whom Harper later married in 1965. Harper was stepmother to Schaal's daughter, Wendy, an actress. They lived in Greenwich Village. She returned to Broadway in February 2010, playing Tallulah Bankhead in Matthew Lombardo's Looped at the Lyceum Theatre.

Harper appeared in a bit part in the film version of Li'l Abner (1959), playing a Yokumberry Tonic wife. She broke into television on an episode of the soap opera The Doctors ("Zip Guns can Kill"). She was an extra in Love with the Proper Stranger. She was in the ensemble cast of Paul Sill's Story Theatre and toured with Second City with Schaal, Linda Lavin and others, later appearing in sketches on Playboy After Dark. Harper performed several characters in a comedy LP, When You're in Love the Whole World is Jewish, which included the popular novelty single, The Ballad of Irving, a recitation by TV announcer Frank Gallop. Harper and Schaal moved to Los Angeles in 1968, and co-wrote an episode of Love, American Style.
Television 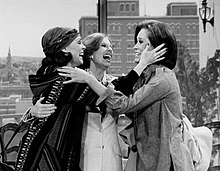 While doing theater in Los Angeles in 1970, Harper was spotted by casting agent Ethel Winant, who called her in to audition for the role of Rhoda Morgenstern on The Mary Tyler Moore Show. She co-starred from 1970–1974 and then starred in the spin-off series, Rhoda (CBS 1974-1978) in which her character returned to New York.

She won four Emmy Awards and a Golden Globe Award for her work as Rhoda Morgenstern throughout this period. In 2000, Harper reunited with Moore in Mary and Rhoda, a TV movie that brought their characters together again in later life. The first season of Rhoda was released on DVD on April 21, 2009, by Shout! Factory.

She was nominated for a Golden Globe for "New Star of the Year" for her role in Freebie and The Bean (1974). Harper was a guest star on The Muppet Show in 1976, its first season. 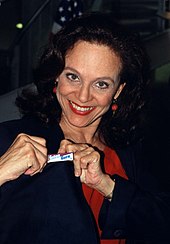 Harper returned to situation comedy in 1986 when she played family matriarch Valerie Hogan on the NBC series Valerie. Following a salary dispute with NBC and production company Lorimar in 1987, Harper was fired from the series at the end of its second season. Harper sued NBC and Lorimar for breach of contract. Her claims against NBC were dismissed, but the jury found that Lorimar had wrongfully fired her and awarded her $1.4 million plus 12.5 percent of the show's profits. The series continued without her with the explanation that her character had died off-screen. In 1987, it was initially renamed Valerie's Family and then The Hogan Family, as Harper was replaced by actress Sandy Duncan, who played her sister-in-law Sandy Hogan. NBC canceled The Hogan Family in 1990, but CBS picked up the series for a final season.

Harper appeared in various television movies, including a performance as Maggie in a production of the Michael Cristofer play The Shadow Box, directed by Paul Newman, and in guest roles on such series as Melrose Place (1998) and Sex and the City (1999).

Harper is a member of the Screen Actors Guild (SAG) and ran for president in the 2001 election, losing to Melissa Gilbert. She served on the Hollywood Board of Directors of SAG.

In 2005 through 2006, Harper portrayed Golda Meir in a US National tour of the one-woman drama Golda's Balcony. A film of this production was released in 2007.

She played Tallulah Bankhead in the world-premiere production of Matthew Lombardo's Looped at the Pasadena Playhouse from June 27 to August 3, 2008. The production moved to Arena Stage in Washington, D.C., in 2009. It then briefly ran on Broadway at the Lyceum Theatre, from February 2010 (previews) through April 2010 Harper was to continue in the role on a national tour beginning January 2013, but withdrew from the production due to her health.

On September 4, 2013, Harper was announced as a contestant for the 17th season of Dancing with the Stars. She was partnered with professional dancer Tristan MacManus. Harper and MacManus were voted off the show on October 7, 2013.

Harper appeared as the character Wanda, on the American comedy web television series Liza on Demand, in the July 11, 2018 episode: "Valentine's Day".

Activism and charity work
In the 1970s/80s, Harper was involved in the Women's Liberation Movement and was an advocate of the Equal Rights Amendment. With Dennis Weaver she co-founded L.I.F.E. in 1983, a charity that fed thousands of needy in Los Angeles.

In 2009, Harper was diagnosed with lung cancer. She announced on March 6, 2013, that tests from a January hospital stay revealed she has leptomeningeal carcinomatosis, a rare condition in which cancer cells spread into the meninges, the membranes surrounding the brain. She said her doctors had given her as little as three months life expectancy. Although the disease was reported to be incurable, her doctors said they were treating her with chemotherapy in an effort to slow its progress. In April 2014, Harper said she was responding well to the treatment. On July 30, 2015, Harper was hospitalized in Maine after falling unconscious, and taken via medevac to a larger hospital for further treatment. She was later discharged.

In 2016, Harper continued battling cancer with treatment at Cedars-Sinai Medical Center but was well enough to appear in a short film, "My Mom and the Girl", based on the experiences of director/writer Susie Singer Carter, whose mother has Alzheimer’s disease. In September 2017, she made this comment: "People are saying, 'She’s on her way to death and quickly'. Now it’s five years instead of three months ... I’m going to fight this. I’m going to see a way." At the time, Harper was developing a TV series with Carter. By July 2019, Harper was on a regimen of "a multitude of medications and chemotherapy drugs" and was experiencing "extreme physical and painful challenges" that require "around the clock, 24/7 care."