She played Cassandra Wong in the feature films Wayne's World and Wayne's World 2; Juno Skinner in True Lies; Nani Pelekai in Lilo & Stitch, its sequel films and Lilo & Stitch: The Series; Queen Tyr'ahnee in Duck Dodgers; Richard Lewis' girlfriend, Cha Cha, in Curb Your Enthusiasm; and starred as Sydney Fox in the television series Relic Hunter. She appeared as a contestant in the second season of Dancing with the Stars and the fifth season of The Celebrity Apprentice.

Early life
Carrere was born in Honolulu, Hawaii. She is the daughter of Audrey Duhinio Janairo, a computer supervisor, and Alexander Janairo, a banker. According to Carrere, she is of Chinese, Filipino and Spanish ancestry.

Carrere attended Sacred Hearts Academy, an all-girls school. She longed to be a singer as a child. Although she was eliminated during the first round of her 1985 Star Search appearance at the age of 17, she was spotted by a local producer while shopping at a Waikiki grocery store and was cast in the movie Aloha Summer, which he produced and had a cameo.

Film and television career
Following this success, Carrere returned to Los Angeles, and after working several months as a model, landed her first role in the American television series Airwolf in early 1985. Her first major breakthrough was in the daytime soap opera General Hospital. She played the role of Jade Soong Chung from 1985 to 1987. She also had a guest appearance on Tour of Duty and The A-Team, which was supposed to lead to her joining the cast; her General Hospital obligations, however, prevented her from joining the team. Her character was dropped after one episode, and was never mentioned again. She also made guest appearances on the shows MacGyver ("The Wish Child") as a karate instructor, and a different assassin character in a later episode ("Murderer's Sky"), on Anything But Love as the adopted daughter of Marty Gold (Richard Lewis), and on Married... with Children as Piper Bauman, a rival of Kelly Bundy, who attempted to steal a modeling job from her.

After appearing in the 1991 action films Harley Davidson and the Marlboro Man and Showdown in Little Tokyo, she emerged into the public spotlight when cast as Cassandra, a rock singer and love interest of Mike Myers's character, Wayne Campbell, in Wayne's World (1992), a role she reprised the next year in Wayne's World 2. A trained singer, Carrere performed all of her own songs in the first film, and the Wayne's World soundtrack features her vocals. She turned down a role in Baywatch to audition for Wayne's World. In 1992, People named her to its annual "50 most beautiful people" list.

Other roles in prominent films include the parts of smuggler Juno Skinner in True Lies, a 1994 Arnold Schwarzenegger action film; a mixed African-Japanese computer expert in Rising Sun, a thriller written for the screen by Michael Crichton, starring Sean Connery and Wesley Snipes; robber Gina Walker in The Immortals in 1995; and secretary Victoria Chappell in High School High, a 1996 parody. She also starred as Ari, a space marine turned pirate, in the 1995 adventure/puzzle game The Daedalus Encounter. She also starred as the evil witch/queen in the 1997 Universal Films picture Kull the Conqueror, co-starring versus Kevin Sorbo, and starred in late '90s M&M's commercials as herself. At the end of the decade, she was cast as Ana Ishikawa in the motion picture of the comic book character Shi, but the film wasn't concreted. 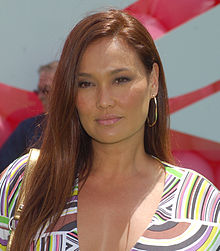 From 1999 to 2002, Carrere starred as archeology professor Sydney Fox in Relic Hunter, a syndicated action-adventure series strongly reminiscent of the Indiana Jones and Tomb Raider films and video games. At this time, Carrere was featured in the men's magazine Maxim Magazine. Relic Hunter lasted for a total of three contracted television seasons. Carrere then provided the voice of Lilo's sister Nani in the animated film Lilo & Stitch (2002) and its spinoffs, as well as the voice of Queen Tyr'ahnee from the 2003 Duck Dodgers animated series. She also provided the voice of Snookie in the 2005 animated film Aloha, Scooby-Doo!

She participated as a contestant on the popular reality show Dancing with the Stars, and eventually placed sixth overall. Carrere later participated in the fifth season of The Celebrity Apprentice, but her "apprenticeship" to Donald Trump, the "boss" of the show, was terminated in that season's fifth week.

Carrere posed nude for the January 2003 issue of Playboy. The photos were republished in the German December 2006 issue of the magazine. Recently, she has appeared as a guest star on a number of television shows, including Back to You, Nip/Tuck, and Warehouse 13. She has also appeared in several episodes of season six of Curb Your Enthusiasm as Richard Lewis' girlfriend. 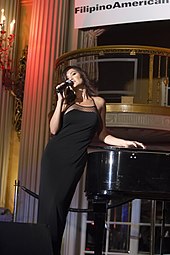 Carrere has continued to nurture her singing career. In 1993, her first solo album, Dream, produced by Matt Prinz, was released, and went platinum in the Philippines. That same year, she was featured on the soundtrack of Batman: Mask of the Phantasm, performing the ending theme, "I Never Even Told You". Her second album, Hawaiiana, was released in June 2007 and takes Carrere back to her Hawaiian roots with four-time Grammy Award-winning record producer Daniel Ho accompanying her on classic solo slack-key guitar and ukulele. The album was nominated for a 2008 Grammy Award under the category Best Hawaiian Music Album.

In 2009, she acted as co-host for the pre-Grammy Awards telecast online event alongside Wayne Brady.

She won a Grammy Award in 2009 for her third album 'Ikena, which was also produced by Ho, and was a finalist at the 2010 for He Nani, the third album she had recorded with Ho as her producer.

In 2011, she won another Grammy Award (Best Hawaiian Music Album) for her album Huana Ke Aloha.

On November 30, 2002, she married photojournalist Simon Wakelin. They have a daughter. On April 2, 2010, Carrere filed for divorce in person at Los Angeles County Superior Court. According to court documents she cited irreconcilable differences as the reason for the divorce and asked for sole physical custody of their daughter. Their divorce was finalized in August 2010, with the two of them reportedly sharing custody of their daughter. She lives in Los Angeles.