Born: Michael Gregory Rowe
Date of Birth: March 18, 1962
Place of Birth: Baltimore, Maryland, U.S.
Residence: San Francisco, California, U.S.
Education: Overlea High School, Community College of Baltimore County, Towson University
Occupation: Television host, Narrator
Television: Dirty Jobs, Somebody's Gotta Do It
Website: www.mikerowe.com
Michael Gregory Rowe (born March 18, 1962) is an American television host and narrator. He is known for his work on the Discovery Channel series Dirty Jobs and the CNN series Somebody's Gotta Do It. He currently hosts a series produced for Facebook called Returning the Favor in which he finds people doing good deeds and does something for them in return. He also hosts the podcast The Way I Heard It with Mike Rowe, which he describes as "short stories designed specifically for the curious mind plagued with a short attention span". Rowe has narrated programs on the Discovery Channel, The Science Channel, and National Geographic Channel such as Deadliest Catch, How the Universe Works, and Shark Week. He has appeared in commercials for firms such as the Ford Motor Company.

Early life
Rowe was born in Baltimore, Maryland to John and Peggy Rowe, who were both teachers.He stated in commercials for Dirty Jobs that the show is a tribute to his father and grandfather. He became an Eagle Scout in 1979 in Troop 16 in Baltimore, and he read out loud to students at the Maryland School for the Blind during his service project for Eagle Scout. He cites this as one of the reasons that he became interested in narrating and writing. In June 2012, Rowe was awarded the Distinguished Eagle Scout Award by the Boy Scouts of America.

Rowe attended Kenwood Presbyterian Church in Baltimore, which his parents still regularly attend. He graduated from Overlea High School in 1980, where he excelled in theater and singing under choir director Freddie King, whom Rowe credits for his interest in performing. He then studied at Essex Community College. He was named an Honorary Life Member of the Barbershop Harmony Society on July 8, 2017 at the Society’s international convention in Las Vegas. In 1985, he graduated from Towson University with a degree in communication studies.

Rowe has hosted On-Air TV for American Airlines, No Relation for FX, and New York Expeditions for PBS.

Starting in the mid-1980s, Rowe hosted Your New Home for WJZ-TV in Baltimore for 15 years. 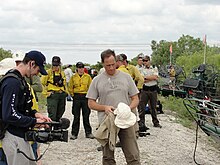 In the early 1990s, Rowe hosted the CD-ROM music trivia game Radio Active (as "Bobby Arpeggio") for defunct Sanctuary Woods. During the same period, he was an on-air host for the home-shopping TV network QVC. In a 2006 interview, Rowe related how he got the job at QVC: "I was in the opera at the time. I walked across the street with a buddy of mine during a performance. We're dressed as Vikings and we have a drink. The TV is turned to QVC .... My buddy bets me $100 I can't get a call back. So I crashed the audition and got a job on the spot. I basically turned the whole thing into my own stupid David Letterman show. I made fun of the callers and made fun of the products." Rowe has claimed that QVC fired him three times. When told in a 2008 episode of Dirty Jobs that the gourds he was working on would be sold via QVC, he said he was familiar with the corporation and proceeded to ad-lib a sales pitch for them.

From 2001 to 2004, Rowe hosted The Most for The History Channel. From 2001 to 2005, Rowe hosted Evening Magazine on KPIX-TV in San Francisco. During this time, he appeared in a news segment called "Somebody's Gotta Do It", profiling a number of unpleasant professions; the concept later grew into Dirty Jobs. Rowe's first work with the Discovery Channel included a trip to the Valley of the Golden Mummies to host Egypt Week Live!, where he explored ancient tombs live with Dr. Zahi Hawass, an Egyptian archaeologist.

In September 2012, Rowe hosted a three-part series How Booze Built America on the Discovery Channel.

CNN announced on April 10, 2014, that Rowe would host Somebody's Gotta Do It, a new "Original Series" that began in the Fall 2014 lineup. Rowe highlights "unique individuals" in their respective passionate undertakings, whether it be work, hobby or fanaticism. Somebody's Gotta Do It is produced by Craig Piligian’s Pilgrim Studios.

As narrator
In addition to hosting programs, Rowe has an extensive background as a narrator. His work with Discovery Channel includes narrating American Chopper, American Hot Rod, Deadliest Catch, Wild Pacific, and Ghost Lab, as well as other Discovery specials and series such as How the Universe Works, and Syfy's Ghost Hunters. Rowe has hosted the Discovery Channel's annual Shark Week in 2006 and 2008, along with hosting the special You Spoof Discovery, an amateur parody video special which poked fun at some of the popular series on the Discovery Channel's lineup. Rowe is currently the narrator for National Geographic Channel's series Wicked Tuna.

Rowe is a lifelong fan of radio broadcaster Paul Harvey. 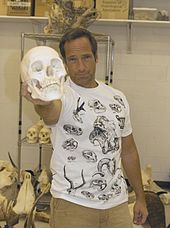 Rowe was originally tapped to be the on-screen host of the Discovery Channel's Deadliest Catch, a show about crab fishing in the Bering Sea, and shot footage aboard several crab boats in addition to narrating the series. When Dirty Jobs was picked up by Discovery, he was told to choose which show he wanted to appear in on-screen. Rowe claims he was told by Discovery that the shows would air back-to-back on the same night: "We can't have you telling us stories about six dead fishermen on camera and making a fart joke with your arm in a cow's ass". Rowe chose to host Dirty Jobs and narrate Deadliest Catch; the footage of him on the boats was not used in the series, although he did appear in a season finale of Deadliest Catch, interviewing the boat captains. Rowe hosted a related show about life on the Bering Sea, a 2007 miniseries, After the Catch, a show which has continued after each season of Deadliest Catch.

Other narration work by Rowe includes Mystery Diagnosis, Drydock: A Cruise Ship Reborn, Southern Steel, Powertool Drag Racing, Scavengers Rock (Animal Planet), Airplane Repo and the opening of Ghost Hunters, a Syfy series from the producers of American Chopper. Additionally, Rowe has done voiceover work for the reality television show The Ultimate Fighter and the NASCAR pre-race show for the 2009 Chase on ESPN.

He hosts a podcast called The Way I Heard It with Mike Rowe, in partnership with Red Seat Ventures. The podcast is sponsored by Procore, starting from February 2019.

Additional appearances
On October 7, 2007, Rowe appeared on Fox's American Dad! as the voice of a meter maid.

Rowe appeared on an episode of Sesame Street (Season 39) in a segment called "Dirtiest Jobs With Mike Rowe", which aired on October 13, 2008. Rowe visits Sesame Street to find the dirtiest job, which happens to belong to Oscar. Rowe must do all the things Oscar does. His tasks include finding and counting stinky cheese, sorting trash, and giving his pet pig, Spot, a mud bath. To Oscar's chagrin, Rowe does not want to stop, as he is having too much fun.

In 2012, Rowe appeared in an episode of the ABC sitcom Last Man Standing playing the role of Jim Baxter, the brother of Tim Allen's character.

In June 2013, Mike Rowe spoke to the delegates at the 49th Annual National Leadership and Skills Conference for SkillsUSA in Kansas City, Missouri. He addressed the crowd of 15,000+ at Kemper Arena about the importance to "Work Smart and Hard".

In 2017, Rowe was a guest on the premiere episode of This Old House. This first project of the season spotlights "Generation Next", an organization that is training young people to learn the building trades. Rowe, through his "mikeroweWORKS" foundation and the "This Old House" people are supporting this initiative.

As pitchman
In 1998, Rowe was the television spokesperson for Epic Pharmacy, a Baltimore-area association of independent pharmacies.

Beginning in March 2007, he was featured in several Ford Motor Company F-Series truck commercials, presented in a style similar to Dirty Jobs, including one for Ford Sync. In the summer of 2009, he appeared in advertisements for Ford and Lincoln-Mercury vehicles that used the tagline: "Why Ford. Why Now."

In 2010, Rowe appeared in internet spots for Motorola iDEN combined radios/mobile phones, explaining that the phones were used "by real people, for real work" as they were used for Dirty Jobs-type applications.

On July 26, 2010, Rowe became the spokesperson for Caterpillar. Rowe will work with dealers and customers "to get a real world perspective on their jobs".

In 2011, Rowe appeared with his parents in television spots for Viva paper towels.

In 2012, Rowe became a spokesperson for Novartis animal health to educate pet owners about fleas. The campaign is called “The Dirty Truth about Fleas".

Trade activism
On Labor Day 2008, Rowe launched a website, mikeroweWORKS.org, which is focused on the decline in the blue collar trades and the crumbling state of the infrastructure. A trade resource center has been launched and provides information, resources, and forums for people interested in learning about, or pursuing a career in, the trades, as well as a new blog aggregator for the trades and construction industry called the "Trades Hub", which launched in April 2011.

On September 19, 2010, Mike Rowe and the Association of Equipment Manufacturers started a campaign called "I Make America". The campaign aims to create jobs in the manufacturing sector by encouraging infrastructure investment and export agreements. The group argues that this will improve the economy and global competitiveness of the United States.

In May 2011, Rowe testified on the issue before the U.S. Senate Committee on Commerce, Science and Transportation.

Rowe sent a letter to President Obama at the start of his first term offering to help promote the 3 million "shovel ready" jobs promised during the campaign, suspecting it might be a tough sell, "given the country's then-current relationship with the shovel." He did not receive a reply. During the 2012 presidential election, Rowe contacted GOP candidate Mitt Romney and appeared with him on September 26, 2012, at a campaign event in Ohio. "He's non partisan, he's not here to endorse me, he's not here to add support to one campaign or another," Romney said of his guest. "He's here to talk about his ideas about how to help America create more jobs."

In Spring 2013, mikeroweWORKS launched its newest initiative, Profoundly Disconnected. Rowe states, "many of the best opportunities that exist today require a skill, not a diploma. The purpose of this site is to promote that simple truth." While in high school in 1979, Rowe saw a poster in his guidance counselor's office that read "Work Smart, Not Hard". He hated it so much, he changed it to "Work Smart AND Hard"; he now prints such posters and wants them hanging all over the country to get people to change the way hard work is perceived.

Rowe describes himself as a cheerleader for both blue-collar workers and white-collar workers, hoping to promote individual initiative and positive thinking throughout the U.S. economy. He has stated that he feels alienated from the current U.S. political system given that both business owners and regular workers receive, in his opinion, unfair criticism, with issues such as geographical mismatching and a lack of job training causing unemployment. Rowe is a gun owner and a supporter of the U.S. 2nd Amendment; however, he's not a member of the National Rifle Association or any similar group.

Awards and honors
Rowe was the first winner of the Critics' Choice Television Award for Best Reality Show Host in 2011.

Personal life
Rowe sang professionally with the Baltimore Opera. He resides in San Francisco, California. In 2016, he was subject to baseless rumors describing his death, leading him to quote the famous line attributed to Mark Twain: "Reports of my death are greatly exaggerated."