Gabriela Beatriz Sabatini (born 16 May 1970) is an Argentine former professional tennis player. She was one of the leading players on the women's circuit in the late-1980s and early-1990s. She won one women's grand slam singles title at the US Open in 1990, the women's grand slam doubles title at Wimbledon in 1988, two WTA Finals in 1988 and 1994, and a silver medal at the 1988 Olympic Games in Seoul.

Sabatini also won most of the highest level regular events on the women's tour including Miami and Rome (four times). In the late 1980s, Sabatini launched a line of fragrances after partnering with the German perfume company Muelhens. Her signature scent debuted in 1989.

Early life
Sabatini was born 16 May 1970 in Buenos Aires, Argentina to parents, Osvaldo and Beatriz Garofalo Sabatini. She has one elder brother. Her father is an executive in General Motors.

Sabatini said that she deliberately lost matches in her youth to avoid reporters and the limelight. She made this claim when she was 43, saying her shyness was a major problem, and she thought she had to speak after winning a tournament; so, she often lost in semifinals.

Career
Sabatini first came to the tennis world's attention as a junior. She started playing tennis at the age of 6, and won her first tournament at age 8. In 1983, age 13, she became the youngest player to win the Orange Bowl in Miami, Florida. She won six major international junior titles including the French Open girls' singles, and was ranked World No. 1 junior player in 1984.

In 1985, aged 15 years and three weeks, Sabatini became one of the youngest-ever players to reach the semifinals of the French Open, where she lost to Chris Evert. She won her first top-level singles title later that year in Tokyo.

In 1988, Sabatini reached her first Grand Slam singles final at the US Open. She faced West Germany's Steffi Graf, who had won all three previous Grand Slam singles events that year and was looking to win a fourth. Graf won the match in three sets. Sabatini was selected to represent Argentina in the 1988 Summer Olympics held in Seoul and carried her country's flag in the opening ceremony. She went on to win the silver medal in the women's singles competition. In the final, she again faced Graf, who was bidding to turn her "Grand Slam" (all four majors in the same year) into what the media had dubbed a "Golden Slam" (all four majors plus the Olympic Games in the same year). Graf won 6–3, 6–3. Sabatini teamed-up with Graf to win the women's doubles title at Wimbledon that year. She also won 1988's year-end WTA Tour Championships. 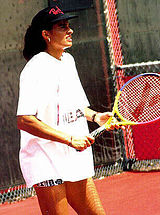 Sabatini's next Grand Slam singles final came in 1990, where she defeated Kathy Jordan, Isabelle Demongeot, Sabine Appelmans, Helena Suková, Leila Meskhi and Mary Joe Fernandez before again facing Graf in the final of the US Open in New York. Sabatini beat Graf in straight sets, winning her only grand slam women's singles title. She credited her win with being more aggressive and coming to the net whenever she can to attack Graf's shorter balls. Sabatini also beat Graf in a semifinal of the WTA Tour Championships in Madison Square Garden, but lost the final to Monica Seles in the event's first-ever five-set final 6–4, 5–7, 3–6, 6–4, 6–2.

Sabatini had a strong start to 1991, winning five tournaments in the first half of the year. She reached her third grand slam singles final at Wimbledon and yet again faced Graf who prevailed in three sets, despite the fact that Sabatini served for the match twice. Sabatini came close to attaining the World No. 1 ranking in 1991, but was narrowly denied by Graf and then Monica Seles. All three players' rankings were within a few points of each other for much of the year.

1993
At the start of the 1993 season, Sabatini continued to advance deep into grand slam singles events. At the Australian Open, she reached the semifinals but lost to the eventual champion, Seles, with a score of 2–6, 1–6. Later that year at Roland Garros, Sabatini was defeated by Fernández in a quarterfinals. Sabatini had raced to a seemingly insurmountable 6–1, 5–1 lead and appeared poised for an easy victory. However, Mary Joe saved five match points on her way to winning a second set tiebreak. Finally, after 3½ hours, Fernández eliminated Sabatini by a final score of 1–6, 7–6 (7–4), 10–8. Despite the setback at the French Open, Sabatini reached the quarterfinals at Wimbledon, losing to Jana Novotná, a player she had beaten six consecutive times. However, this time Novotná defeated Sabatini in straight sets. At the 1993 US Open, Sabatini had hoped to end the year on a high note, but she would first have to again get past Graf, this time in the quarterfinals. In their four previous meetings, Graf had beaten Sabatini, but Sabatini was looking to change those recent results. After losing the first set at 2–6, Sabatini raised the level of her game in the second set, winning at 7–5 to even the match at one set apiece. However, in the third and deciding set, Graf dismantled Sabatini with a 6–1 final set to win the match. That year, Sabatini was the only one of 17 of the top 25 players to abstain from voting against Seles for having her ranking preserved following her stabbing. Graf was absent from the tournament and thus the vote. When Seles returned to the tour two years later she was finally granted a joint No. 1 ranking with Graf.

Sabatini finally brought her winless streak to an end in November, defeating Lindsay Davenport in the final of the 1994 WTA Tour Championships in Madison Square Garden. Also in 1994, Great American Doll Company had created a doll in Sabatini's likeness, dressed in tennis attire. That same year, Sabatini published a motivational book entitled My Story (ISBN 1-886612-00-5), providing a peek into her background and inspirations that led her to be a tennis player.

1995
Sabatini started the 1995 season by reaching the semifinals in Sydney, where she faced Mary Joe Fernández in what was a rematch of the previous year. At the 1994 Sydney tournament, Fernández had put Sabatini away in straight sets in that semifinal encounter. This time, she won in straight sets, snapping a three match losing streak against Fernandez. Sabatini then defeated Lindsay Davenport in the final in straight sets in what was to be the last singles title of her career. At the 1995 Australian Open, Sabatini, seeded fifth, was dismissed by Marianne Werdel in the first round. In the semifinals of the Lipton Championships in Key Biscayne, Sabatini was leading Kimiko Date 6–1, 5–1 before squandering three match points and double faulting 18 times as Date rallied to beat Sabatini with a scoreline of 1–6, 7–6, 7–6. It turned out to be a repeat performance of the 1993 French Open quarterfinals, where Sabatini lost an identical lead of 6–1, 5–1 against Mary Joe Fernández. At the 1995 French Open, Sabatini looked to put that memory behind her when she faced second seeded Steffi Graf in the quarterfinals. However, Graf proved too strong for Sabatini and won in straight sets. Later that summer at Wimbledon, Sabatini, seeded eighth, lost to defending champion and third-seeded Conchita Martínez of Spain in the quarterfinals. Martínez had clearly turned the tables against Sabatini in their rivalry, beating Sabatini four out of their last five meetings. At the final grand slam of the year, the US Open in New York, Sabatini beat Martina Hingis in the round of 16. She then defeated Mary Joe Fernández in the quarterfinals before losing to top-seeded Graf. With the victory, Graf had now got the best of Sabatini in eight consecutive matches. Against Graf, this also marked the 40th match and final time the two would meet since their rivalry began in 1985 with Graf winning 29. 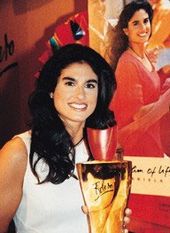 Sabatini's last professional singles match was on 14 October 1996, when she lost in straight sets to Jennifer Capriati in the first round of the European Indoors. Sabatini played her last professional match on 19 October 1996, a women's doubles semifinals encounter, with Lori McNeil in Zürich. Sabatini retired from the professional tour in 1996, having won 27 singles titles and 14 doubles titles. She reached her highest ranking of World No. 3 in 1989. In 2001, she won the Diamond Konex Award as the most relevant "Sportsman of the Decade" in Argentina. Sabatini was inducted into the International Tennis Hall of Fame on 15 July 2006.

Personal life
On 22 May 2003, Sabatini was able to obtain Italian citizenship "jus sanguinis" because her paternal great-grandfather David Sabbatini was born in Potenza Picena in the Marche region, and immigrated to Argentina at the end of the 19th century like many other Santesi in Roldán, Province of Santa Fe with his wife Rosa Vivani, whom he married on 12 February 1899 in Potenza Picena.
Nowadays, she resides in Buenos Aires and Boca Raton and since 2015 in Pfäffikon, Schwyz as well.
Since retiring at the age of 26, Sabatini has promoted her lines of perfumes and worked with organizations to help children and the poor.