Szubanski's career started as a writer and performer of sketch comedy and has since progressed to production of TV, film acting, and musical theatre. She starred in Kath & Kim where she played Sharon Strzelecki, and in the films Babe (1995) and Babe: Pig in the City (1998) as Esme Hoggett.

In 2015, she released her memoir Reckoning.

She has twice been polled as Australia's most recognised and trusted personality.

On 26 January 2019 Szubanski was awarded an Officer (AO) in the general division of the order of Australia for distinguished service to the performing arts as an actor, comedian and writer, and as a campaigner for marriage equality. 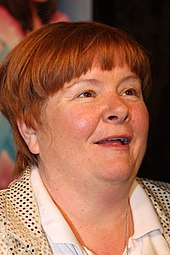 Szubanski was born 12 April 1961, in Liverpool, England. Her mother Margaret (née McCarthy) is Scottish-Irish and came from a poor family. Her father, Zbigniew Szubanski, came from a well-off Polish family and, as recorded in the Official Archives of the Warsaw Uprising Museum, was an assassin in a counter-intelligence branch of the Polish resistance movement in World War II. Her cousin is Polish actress Magdalena Zawadzka. She attended high school at Siena College, Melbourne, and later studied fine arts and philosophy at the University of Melbourne. Szubanski graduated with a Bachelor of Arts and Bachelor of Arts (Degree With Honours) in 2016.

In 1976, as a year 10 student, she captained a team on the television quiz It's Academic. 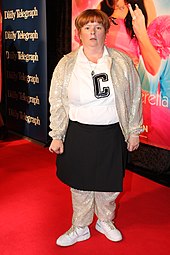 In 1985, while performing in a University of Melbourne Law Revue of Too Cool for Sandals, with Michael Veitch and Tom Gleisner, Szubanski was talent-spotted by producers from the Australian Broadcasting Corporation (ABC), who convinced her to join up with some other university friends in creating a television sketch comedy show, The D-Generation.

Szubanski was part of the team that created the television sketch comedy Fast Forward for the Seven Network, in which she played various characters, including Pixie-Anne Wheatley, Chenille from the Institute de Beauté, Wee Mary MacGregor, Joan Kirner, Michelle Grogan and other characters. The character of Lynne Postlethwaite was first performed on the ABC's The D-Generation. It was originally written by John Allsop and Andrew Knight, but from Fast Forward on Szubanski co-wrote the sketches, and created and co-wrote her characters.

In 1995, she and friends Gina Riley and Jane Turner wrote, performed and produced the first all-female Australian sketch comedy television program; Big Girl's Blouse. When Riley and Turner developed the sketch-characters they had created into the sitcom Kath & Kim, Szubanski joined them to play Sharon Strzelecki, a character she had previously created herself.

Her character Sharon "pashed" (Australian slang for vigorous kissing) and "married" Australian cricketing legend Shane Warne. She also "pashed" the late Australian actor Heath Ledger on the red carpet at the AFI awards in 2006 while in the role of Sharon, acting as an assistant stage manager.

In 1999, Szubanski created, wrote, co-produced and starred as Margaret O'Halloran in the Dogwoman series of TV films, a detective style show based on the idea an expert "dog-whisperer" who, by treating problem dogs, inadvertently stumbles upon and solves human crimes.

In 2009, she appeared on Who Do You Think You Are? where she explored her father's Polish Resistance activities as well as the story of her shell-shocked Irish grandfather and her sculptor ancestor Luigi Isepponi who assisted in making the Death mask for William Burke, half of the duo Burke and Hare, notorious grave robbers and serial killers.

From 3 September 2018, Szubanski recurred as Jemima Davies-Smythe on Neighbours. Her character officiated the first same-sex wedding on Australian television.

On 8 April 2019, she appeared as 'Guest Announcer' on Chris & Julia's Sunday Night Takeaway's season finale where she participated in a number of roles.

Film
Szubanski starred in the 1995 film Babe as Esme Hoggett. She reprised her role in the 1998 sequel, Babe: Pig in the City. She then teamed up again with director/producer George Miller to voice the role of Miss Viola in the animated films Happy Feet and Happy Feet Two.

In 2007, she had a minor role as Mrs. Lonsdale, the housemaid in The Golden Compass to Lyra Belacqua.

Author
In 2015, Szubanski released her award-winning memoir Reckoning. In 2016 Magda’s memoir Reckoning won several awards and beat some of Australia’s top literary authors to win the TBA[19]. Reckoning also won the $40,000 Douglas Stewart Prize for Nonfiction,[20] and "Book of the Year" and "Biography of the Year" at the Australian Book Industry Awards.

While the book is nominally an autobiography, it is in large part about her father Zbigniew Szubanski, who was an assassin working for the Polish Resistance during World War 2. Reckoning deals with the themes of intergenerational trauma, the possible genetic inheritance of traumatic memory and Szubanski's struggles with her own sexuality in the shadow of this legacy.

Reviewer Peter Craven in The Australian said it would "dazzle every kind of reader" and described it as "a riveting, overwhelmingly poignant autobiography by a woman of genius. It is a book about how someone might live with the idea of killing the thing they love. It is a story of love and death and redemption and a daughter's love for her father. It is an extraordinary hymn to the tragic heroism at the heart of ordinary life and the soaring moral scrutiny of womankind. Every library should have it, every school should teach it."

Richard Ferguson in The Sydney Morning Herald wrote, "This is documentary writing of the highest order and Szubanski has given life to an incredible war story…Reckoning, this tale of war and suburbia, sexuality and comedy, is likely to be the most popular Australian book of the year. Anyone who doesn't adore Magda Szubanski the clown will be awed by Szubanski the A-grade non-fiction writer. Let's hope the books keep on coming."

Academy Award Winner and friend Geoffrey Rush launched her book and wrote in The Guardian: "I was absorbed in preparing for King Lear when I read the book. The classical stature of that particular father-daughter relationship didn't go unnoticed. Magda grew up in the shadow of a difficult reckoning — the summation, the questioning, the Elizabethan sense of settling the bill with one's parents. As she phrases it: her father needed to forget— she needed to remember. The only way forward was back. Her book riffs a major life in a reflective minor key. I've got lost in Joyce's Dublin, Woolf's Bloomsbury, the Bronte Sisters' Yorkshire moors. Now I'm enthralled with Magda Szubanski's Croydon, Australia's own collective sub-conscious suburb, the architecture of which she deftly anoints as Bauhaus's "bastard child"…Reckoning is really a non-fiction novel – and its invitation into Magda's story is infectious."

The Premier's Award judges described Reckoning as 'warm, clear, wise, funny and deeply intelligent. The amplitude of Szubanski's writing is particularly impressive. Her voice has a light surety, while constantly giving narrative and moral weight to the larger themes of grief, family, migration and finding one's place in the world'."

In 2008, she again participated in some gender-blind casting, taking on the role of pint-sized gangster Big Jule in a major stage production of Guys and Dolls.

In 2010, she appeared in the first Indigenous Musical film Bran Nue Dae as Roadhouse Betty alongside Geoffrey Rush, Ernie Dingo, Missy Higgins and Deborah Mailman. The film was directed by Rachel Perkins, daughter of the Aboriginal activist Charlie Perkins.

In 2012, she again teamed with Rush to appear in the Stephen Sondheim musical A Funny Thing Happened on the Way to the Forum.

Other projects
In 2004, Szubanski advertised the airline Jetstar. Szubanski became a spokesperson for the dieting company Jenny Craig in November 2008. Szubanski joined Jenny Craig weighing 110 kg and had been diagnosed with sleep apnoea. By July 2009, she had lost 36 kg to weigh 85 kg. She later regained weight, then was dropped as a spokesperson for Jenny Craig. However, subsequent weight loss led to her being re-signed as their spokesperson. She was later again dropped from Jenny Craig. She was also featured in commercials for Telstra in 2014.

Charity and activism
In her late teens, Szubanski volunteered as a worker in a Women's Refuge in Melbourne's North West region. She eventually became a paid worker.

She is Patron of Twenty/10.

During the Australian Marriage Law Postal Survey, Szubanski was interviewed on several TV shows advocating for a "Yes" result.

Some have credited her contribution to the Same Sex Marriage Survey as having been "crucial" to the outcome. Szubanski has been a vocal campaigner for LGBTQI+ rights and for Marriage Equality since coming out publicly 6 years ago. Her appearance on Q&A is considered by some to be pivotal in the debate. Her National Press Club address entitled 'What It Feels Like To Be An Unwilling Human Guinea Pig In A Political Experiment' spoke of the pain as well as the joy experienced by LGBTQI+ people throughout the duration of the survey.

Personal life
Szubanski has described herself as "culturally Catholic".

On 14 February 2012, Szubanski came out, in a statement supporting same-sex marriage timed to coincide with Valentine's Day. Later that day, she stated that she "absolutely identifies as gay" in an interview on Australian TV current affairs programme The Project.

She is single and during the 2013 Australian Federal election she tweeted lightheartedly about the lack of policy catering for single people.